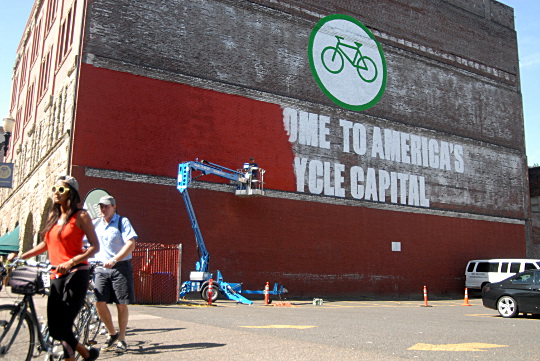 This is a long post. It’s about one person’s experience. And it’s the only thing we expect to publish today. 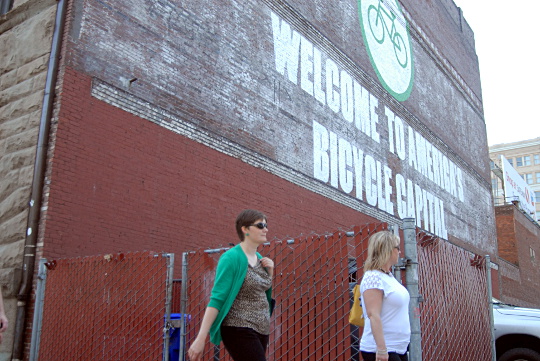 A bike rental shop put the mural up without city approval. Now that the city has enforced its code, the shop has received permission to convert the bike icon to an ad and remove the current lettering.
(Photos by M.Andersen/BikePortland)

Update 5/9: Pedal Bike Tours spokeswoman Lota LaMontagne writes in an email that the letters won’t be painted over until late morning on Monday. “There has been no change in the decision by the city for the mural to come down,” she writes. “This is only related to timing on the logistics of painting such a large space in a public parking lot.” The story has been updated to reflect this. 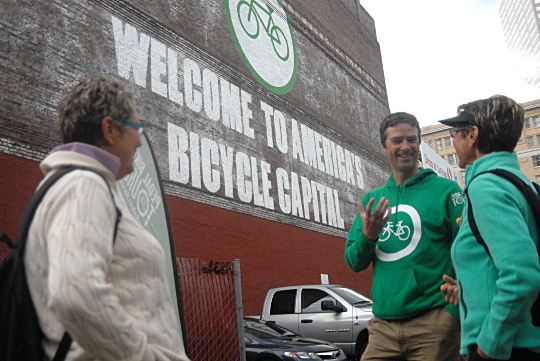 Pedal Bike Tours owner Todd Roll and two tourists with the mural his company created in 2012. The lettering is due to be taken down Thursday due to a city code enforcement decision.
(Photo by M.Andersen/BikePortland)

A city whose sign code is intended to prevent advertising eyesores and a local shop owner who’s developed “mixed feelings” about his project have settled on the removal, this Thursday, of one of downtown Portland’s newest icons.

That’s when workers are scheduled to remove the two-year-old, 45-foot-tall declaration that the city is “America’s bicycle capital.” Pedal Bike Tours, the local rental and tour company that painted the mural in 2012 based on one of their T-shirt designs, hired them after conceding a compromise in a long negotiation with the city’s code enforcement office.

“Photograph it while you can,” Pedal Bike Tours owner Todd Roll said in an interview Tuesday. “It’s out of here.”