Asha Whittle’s story could have been tragic.

Judging from the nature of the collision (she and her bike were dragged across the intersection), photos taken at the scene, and comments from police and other first responders, when I first reported about her crash earlier this month, I expected that she had sustained major injuries.

Fortunately, she suffered only minor injuries. She left a comment a day after the crash saying she was “miraculously fine” and is now out of the hospital and trying to get back to life as usual. 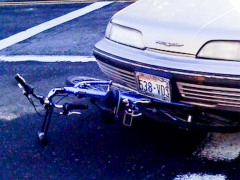 The victim of the crash at NW Lovejoy and 9th yesterday morning, left a comment last night saying she has been discharged from the hospital and has suffered no major injuries. The woman’s name is Asha and she’s a student at Pacific Northwest College of Art (PNCA).

(PNCA, you might recall, was the school of both Brett Jarolimek and Tracey Sparling, both of whom lost their lives in October from right-hook crashes.)

From witness accounts and police statements on the scene, we had feared much worse, so this is welcome news. 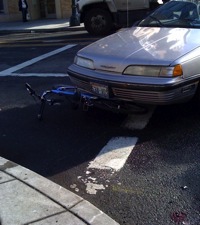 This is the northeast corner of
NW 9th and Lovejoy.
(Photos by Marion Rice)

This morning around 8:45 a woman riding her bike in the bike lane down NW Lovejoy was right-hooked as she attempted to cross NW 9th.

According to Marion Rice, who was on the scene just minutes after the collision took place, the woman was pinned under the car and dragged across the intersection. The car and the bike came to rest near the northwest corner of the intersection (in front of Subway).

Police and ambulance responded to the scene and the woman was taken to the hospital with serious injuries. An officer on the scene told Rice that the woman was conscious (but unable to speak) and has likely suffered a broken leg and pelvis, a broken jaw, and has suffered serious facial lacerations.