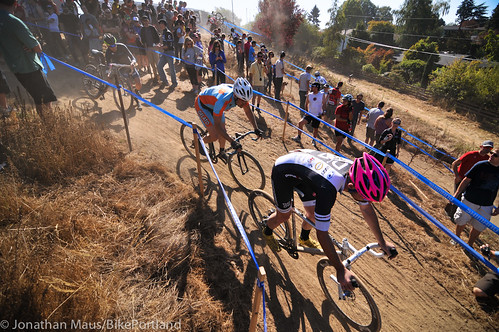 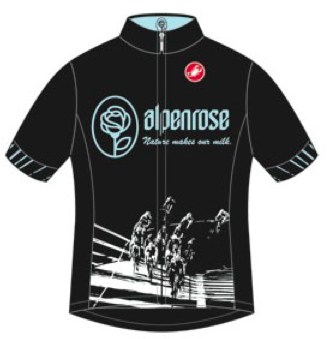 Castelli will donate $60 dollars to OBRA for every
one of these jerseys they sell (price is $100).

The Oregon Bicycle Racing Association (OBRA) is just about $5,000 short of meeting their goal for the first phase of a fundraising effort to replace the pock-marked and cracking concrete surfaces on the venerable Alpenrose Velodrome in Portland’s southwest hills.

The renovation of the straightaways began back in March and has now been completed. “The new portions are amazingly smooth,” says Velodrome manager Mike Murray. The total cost was just over $51,000.

Phase two of the project — the paved infield portion of the track (a.k.a. the apron) — will be equally as expensive. Once all the work is done, Murray says the project will, “Make almost a new velodrome and will keep Alpenrose running for the next 20-30 plus years.” 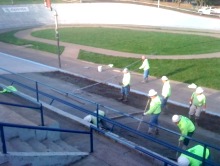 There’s still work to be done
and money to be raised.
(Photo: Brian List/OBRA)

Since a project to renovate the aging surface at Alpenrose Velodrome was announced last month, the Oregon Bicycle Racing Association (OBRA) has seen an outpour of support. Although much of the work to smooth the straightaways is complete, there’s still a big funding gap to pay for that first phase as well as more work that is slated to be done. In hopes of closing that gap, Portland’s Sizzle Pie cycling team, lead by Zak Kovalcik, has paired up with Upper Echelon Fitness to hold a fundraising party this Friday to drum up more support. 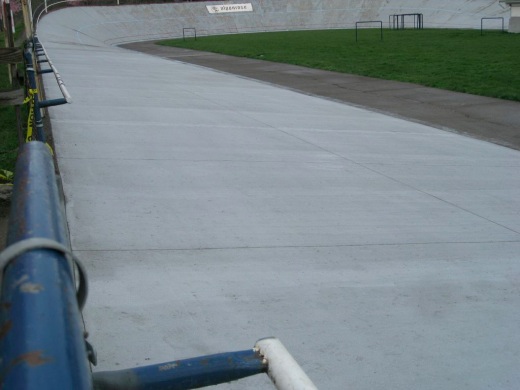 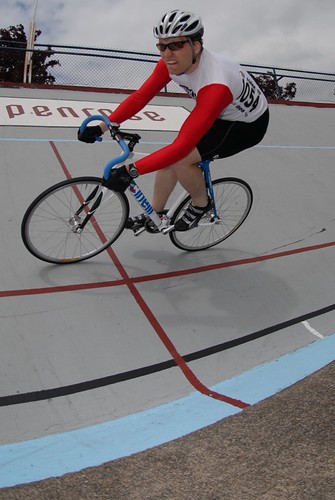 A smooth track is all he needs.
(Photo © J. Maus/BikePortland)a

A major renovation project at the Alpenrose Velodrome is moving forward.

On Monday, we shared the news that the concrete surface on the fabled track had gotten so bad that Oregon Bicycle Racing Association officials decided it was time to bite the bullet and replace it. The owners of the track (Alpenrose Dairy) agreed that the track needed some work. The only thing left was for OBRA to show the folks at the dairy that the community would step up and donate a considerable portion of the project cost.

In the past few days, OBRA’s track program manager Mike Murray has been gathering donations. Today he emailed with some good news: “The renovation project is moving forward. We had a meeting yesterday with the Dairy and the contractors and the project was green lighted.” 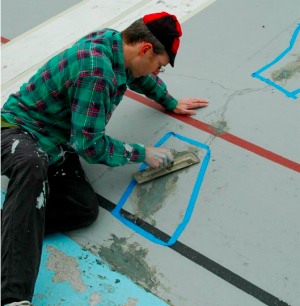 After years of patching and repainting, the time has
come to lay new concrete at Alpenrose.
(Photos © J. Maus/BikePortland)

The Oregon Bicycle Racing Association (OBRA) has launched a fund-raising effort to rebuild a major portion of Alpenrose Velodrome. The 1/6 mile track located on land owned by Alpenrose Dairy in Portland’s southwest hills has become a crucial part of the regional racing scene and has served as a beloved venue since 1962.

However, despite years of patchwork and paint, the track’s concrete surface has reached an advanced state of disrepair that can no longer be fixed with band-aids.

“Along the straightaways is just terrible,” OBRA’s Mike Murray shared with me today. “Riding around that thing is bumpier than riding on a regular road… If you put a speedometer on your track bike you can’t even read the thing.”

Murray, who has managed OBRA’s track program for as long as anyone can remember, has led teams of volunteers twice a year to repair, repaint, and patch the track surface. After an off-season power-washing job, it became clear that another round of band-aid wouldn’t be enough. After the power-wash blasted away years of paint and concrete patch material, “It was obvious that substantial work needed to be done to keep the velodrome running,” wrote Murray in a recent email to OBRA members. 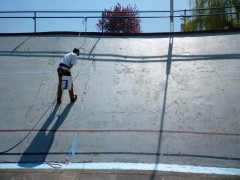 The announcement comes after a week and a half of weeding, scraping, patching, sanding, and sweeping Portland’s beloved concrete bowl to perfection (or close enough, anyway). The track cleanup effort was a labor of love by a crack team of volunteers. 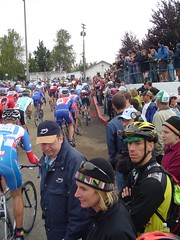 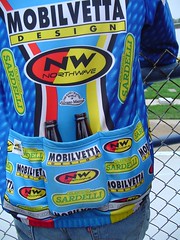 Whew! It was a tremendous day of racing out at Alpenrose Dairy. 760 racers braved the day making this the largest cyclocross race ever on U.S. soil. Unlike last year, the rain didn’t start ’till right at the end so the course wasn’t too muddy…but it was still very tough judging from the numerous crashes. All the big guns showed up for this one. Lynne Bessette, Geoff Kabush, Trebon, Wicks, McCormack, Mazza…you name it. All of America’s best and brightest crossers were on hand.

I rode out to the event with a few guys from the PSU Cycling Team and I’m more tired from running around the race course than pedaling my bike over the SW hills. The great thing about cyclocross is there’s a ton of places to watch the action. Some of my favorites were the run-up, the dismount area in the infield, the fast turns up on the pavement, and of course, the start line.