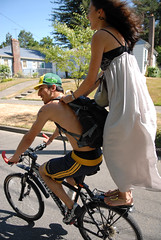 Back in February, Portlander Ken Southerland got a ticket for attempting to give a friend a ride on the back rack of his bicycle. In the summer of 2007, I saw two Portland Police officers issue a ticket to a man on Alberta Street for the same offense. In the latter case, the man was operating a tall bike with a home made wooden deck on the back (see photo below).

In Oregon, there’s a state law that prohibits “unlawful passengers on a bicycle.” With the popularity of Xtracycles and other long-tail bikes where people ride on the rear rack, and the general tendency for “doubling” (which is far from just a Portland phenomenon), I wondered whether or not the examples above expose yet another unfortunate grey-area in Oregon law that could negatively impact people who ride bicycles.