This is where your burning bike questions get answered. We share reader-submitted questions and then let the community weigh in with answers. Check them all out below…

Ask BikePortland: Who can teach my autistic teen how to ride?

“My notion and hope is that there is some bicycle whisperer, bike shop dude, or cycling samaritan out there.”

Today’s Ask BikePortland question comes from a reader who is looking for a very specific kind of help. This is a bit different than our usual fare for this column. Instead of just trying to answer the question, we plan to forward tips and offers to help onto the reader (a woman who has asked to remain anonymous).

Here’s the email that includes the question and request for help:

Ask BikePortland: Is it legal to ride with my dog? 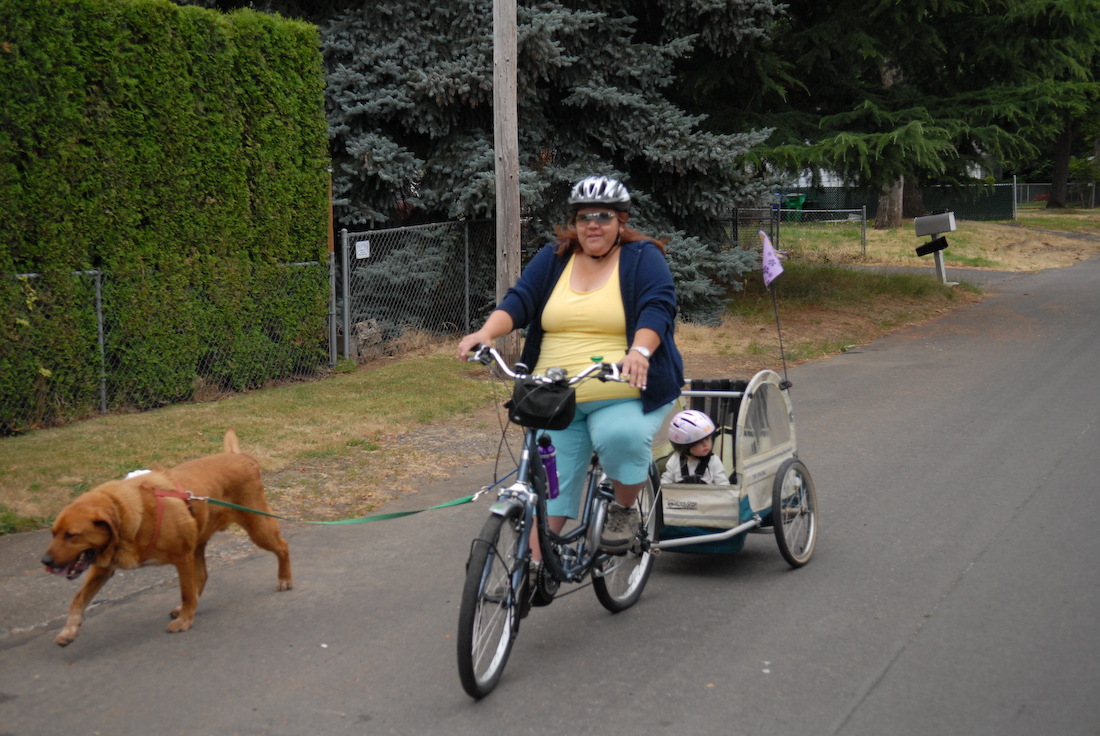 Not a crime, in case you were wondering.
(Photo by J. Maus/BikePortland)

Welcome to the latest installment of Ask BikePortland. Browse past questions here.

Portland is a perennial front-runner in national rankings of top bike cities, and the same goes for dogs. We love them both. But what happens when you demonstrate affection for pedaling and pooches at the same time?
END_OF_DOCUMENT_TOKEN_TO_BE_REPLACED

Ask BikePortland: Can I go when the walk sign turns green? 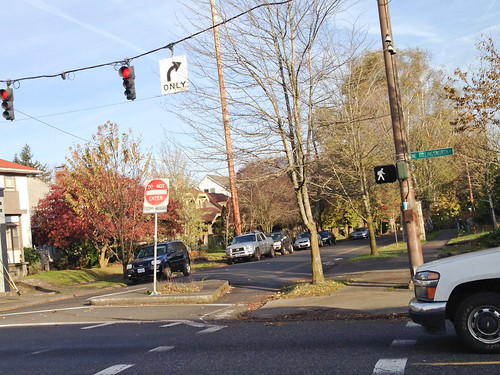 An LPI in action at N Williams and Killingsworth (note the crosswalk has a green while everyone else still has a red).
(Photo by J. Maus/BikePortland)

Have you ever noticed how the “WALK” sign over in a crosswalk sometimes turns green while your signal remains red? This phenomenon has confused a few readers who aren’t sure if they can start riding when the walk sign turns green or if they must wait for the main signal.

Ask BikePortland: What if all of Portland’s bikers decided to drive for one day? 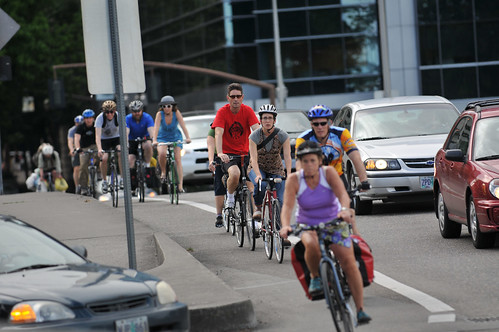 END_OF_DOCUMENT_TOKEN_TO_BE_REPLACED

Ask BikePortland: How can I convince my friend that cycling is safe?

“This is the second time she’s been right-hooked in five months…How can I suggest to her that biking around can be okay again?”

Welcome to our latest installment of Ask BikePortland where we (that includes you, dear readers) attempt to answer your burning bike-related questions.

Today’s question comes from reader Chris Muhs. It’s sort of a bummer of a topic, but one I felt was important to share with the community because I think it’s something many other people grapple with. Chris wants to know how to convince his girlfriend that — despite two collisions in five months — she shouldn’t stop riding.

Ask BikePortland: Should I go it alone or with group at stop signs? Welcome to the latest installment of Ask BikePortland. Today’s question comes from reader Ruben G. Ruben is curious about a topic on a lot of people’s minds today: stop sign behavior.

Ruben wants to know if people on bikes who arrive at a stop sign together are allowed to go through as a group or if they are legally required to go through one at a time. Here’s his question:

“What is the proper way to queue with other bikes at a stop sign? Is it a one at a time scenario? Or can two/three/four bikes line up adjacently to count as one stop? Or maybe even two rows of bikes at a time if traveling as a party?”

END_OF_DOCUMENT_TOKEN_TO_BE_REPLACED

Ask BikePortland: Was a bicyclist right to yell at me for jogging in the street? A look at the laws around people
on bikes and foot sharing the road.
(Photo © J. Maus/BikePortland)

This installment in our ongoing Ask BikePortland series tackles a question I’m sure many of you have had. It comes from reader Ian D.

“I was yelled at on Tuesday by a bicyclist who claimed I was doing something illegal by jogging on the street. Was he right?”

I’ve had this experience too, and I have to admit I was mildly frustrated at the person running. I think the feeling stems from the fact that when I’m riding my bike there’s a constant stream of compromises to the space I’m trying to occupy. If there’s no bike lane, not all people in cars are nice about sharing the space. If I’m on the sidewalk (which is legal except for a swath of downtown), than I must defer to people on foot. Even when I’m on a bike lane, there are often delivery trucks and hotel guests who push the limits of the legal exception that allows them to be there.

So, what is the deal with people who use roadway shoulders and bike lanes as jogging tracks? END_OF_DOCUMENT_TOKEN_TO_BE_REPLACED

Ask BikePortland: Are runners required to have lights while using paths? 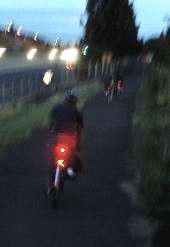 This edition of Ask BikePortland comes from reader J. Long. Mr. Long emailed us after he was involved in a collision with someone who was jogging while riding his bike on the Springwater Corridor at night.

“Hey Jonathan, Two nights ago I was riding my bike home on the Springwater [Corridor] between OMSI and Oaks Park.

I hit a female jogger and we both went down hard. As a cyclist I am always worried that somebody may have been hurt; but as I was laying on the ground she just got up and jogged away while I was a little dazed and trying to get untangled from my bike.

Are there rules for joggers to have reflectors or lights as there are for cyclist’s on multi-use paths?”

END_OF_DOCUMENT_TOKEN_TO_BE_REPLACED

Ask BikePortland: Is cutting in line OK during bridge lifts?

Anyone who has ridden a bike in Portland for long has experienced bridge lifts. When they happen, it’s common for a long line of people on bikes to queue up.

Reader Rick T. wonders about the proper etiquette for waiting in the line. Check out his question below and then share your thoughts… END_OF_DOCUMENT_TOKEN_TO_BE_REPLACED

Ask BikePortland: Can a front bike light be too bright? Being seen doesn’t have to
cause temporary blindness.
(Photos © J. Maus)

Today’s question comes from reader Chris M. Chris wonders if there’s such a thing as a front bike light that’s just too bright..

“I’ve been blinded on my morning commute a few times too many. This afternoon while riding north from Sellwood on the Springwater, I was blinded by a dual strobe light on a bike coming towards me.

It seems that some folks have lights that can literally be seen from a mile away and become blinding within a block when I’m riding against them. It’s difficult for me to see the road in front of me and it can’t be that different for our friends in cars. How bright is too bright for a front light?

I doubt there’s a standard, but does anyone else think that there is such a thing as too bright?”