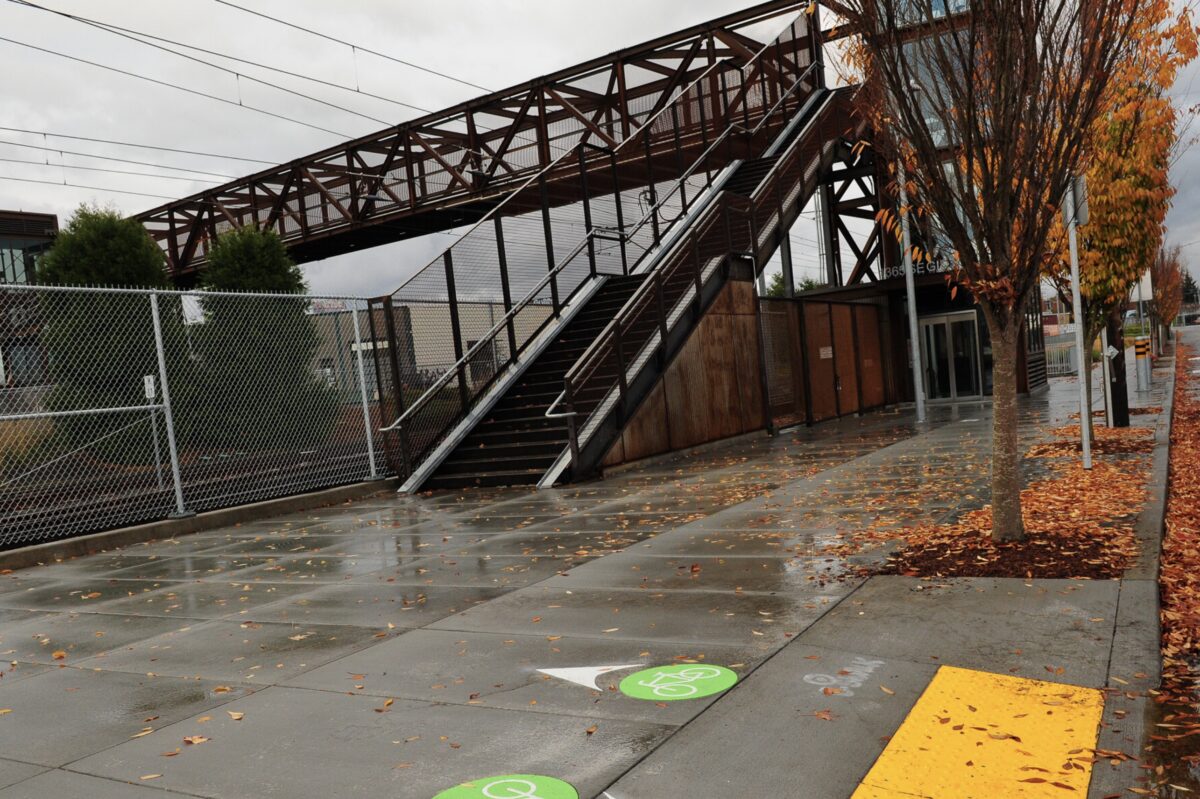 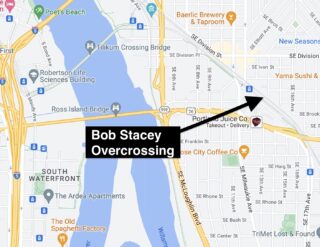 After nearly eight months without service to one or both of the elevators that provide access to the Bob Stacey Overcrossing in southeast Portland, the transportation bureau announced last week that they’ve finally got them fixed. For good (hopefully).

The crossing, which provides a safe and convenient route for folks to avoid the at-grade crossing of four sets of light and heavy rail tracks at SE 12th and Milwaukie, opened in November 2020. But a combination of mechanical failure and vandalism left many people forced to either wait for long train crossings, try other, more dangerous routes, or hoist their bikes up several flights of stairs. The outage got so bad that the namesake of the bridge, former Metro Councilor Bob Stacey, told us back in February that it had become “a mark against us as a community.”

PBOT has blamed “unexpected motor failures” in both elevators and related supply chain issues for the lengthy delay.

Now they say they’ve implemented a new monitoring system to ensure the elevators are more reliable in the future. The system is a partnership with Portland General Electric who provides power to the motors. “While we do not expect to identify any further issues,” reads PBOT’s elevator status website, “if we do detect irregularities, we may need to remove the elevators out of service to avoid a complete motor failure.”

This isn’t the only location where PBOT and TriMet have struggled to keep elevators online. A similar crossing just down the tracks at Lafayette Street has a checkered past and the nearby Darlene Hooley Pedestrian Bridge in South Waterfront that provides access over I-5 is also notoriously unreliable.

Speaking of which, a notice from PBOT just under the message about the Bob Stacey elevators being back in service had this unfortunate news about the Hooley bridge elevators: “This elevator was taken out of service on April 4, 2022, due to a broken glass panel on the lower level door. Based on anticipated replacement glass delivery times, we expect this closure to last approximately 4-6 weeks.”

Does public “promise of reliability” have a MOU (KPIs) with the neighborhood association(s) and other stakeholder groups? And perhaps keeping a in-hand stock of critical parts like in the ‘olden days’ before next day shipping made us all lazy planning wise.

One would think a “broken glass panel” could be temporarily replaced with plywood rather than taking the elevator out of service for 4 to 6 weeks especially since it will likely be lots longer than six weeks.

Yeah. On the face of it, 4-6 weeks seems like a sick joke. Possibly there are clearance issues with plywood vs glass? Fastening plywood might also cause cosmetic damage. Of course, if true, that seems like poor planning and design, as well as poor priorities.

Cosmetic damage? You obviously haven’t been in these elevators for a while.

That elevator was working despite the broken glass.

Reliability with a whiff of stale urine…

Oh, and don’t step in that

Agree. Occasionally we take our grandson to the overpass to watch the MAX and Amtrak trains pass through. He is always thrilled when the MAX operators and train engineers wave up to him (as are we). It’s a wonderful experience. Although we are all able to use the stairs without a problem, the biowaste, trash and graffiti do not add to our wonderful experience.

P.S. We haven’t seen a fire engine leave from or return to the PF&R station across the street yet. We’re hopeful though!

Read until the end for the shocking plot twist. /s

It’s funny because Hooley is the only one that always needed an elevator.

Kinda weird that they can’t patch it ASAP though. A polycarbonate sheet, some strong reversible adhesive, seems like you’re done. Heck I’ve got basic woodworking tools and skills that ought to make a sheet of plywood fit in the frame…

I definitely prefer ramps, but the north side of the Bob Stacey would probably be too tight for a ramp. There are 3 businesses with wide parking approaches to accommodate delivery vehicles.

I’ll note that PGE provides power to all the motors in my house, and they don’t randomly break for extended periods of time.

They ought to rename it the “Nick Clark Memorial Overpass.”

After seeing the slow destruction of these elevators over the past year or so, I’m starting to think that we just can’t have public elevators in this city anymore. A ramp would be much better.

A ramp would be much better.

At least until a PGE power surge broke it.

These are examples of why Portland can never be taken seriously on infrastructure.

As I’ve been forced to go back into my work’s office I’ve been noticing how run down the Trimet trains and platforms are.
From the garbage, the dirty trains, to weeds growing in the rail beds and in the bricks on the platforms. The weeds in the rail beds probably won’t cause damage, but the ones growing up between the bricks will eventually cause the bricks to become lose and become an even bigger, and more expensive, problem. A few squirts of a weed killer would have taken care of it like they used to in the past.
Simple maintenance? What’s that????

And some platforms are worse than others, my stop was at 5th and Oak/Ankeny since the yellow line was put on the transit mall

For the last two years it’s been Union Station, which, as urban transit stops go, qualifies as a double black diamond/advanced users only depending on how close it is to the first of the month and whether a fresh shipment has landed in Old Town recently.

But the area has some great stashes of powder!

The reliability of infrastructure is a subject that can and has been studied. Ramps, mentioned here in the comments several times don’t require supply chains, PGE, or good behavior to keep functioning indefinitely. When we* choose design A (e.g., elevators) over design B (e.g., ramps) we are making choices about reliability.

* and you folks understand better than I do how the we-that-makes-these-decisions is constituted, who gets to participate, belongs to, the we, and who doesn’t.

The “decision making we” was PBOT, the “ramps, please we” was everyone else.

The local neighborhood association argued in favor or ramps at every opportunity, but despite their being all-powerful, PBOT did not do their bidding.

I wish we could have just gotten a ramp.. I guess it would have been more expensive when the project was first proposed, but I wonder now with all the maintenance that has been required if it would have been cheaper in the long run. Ramps do not have moving parts to be replaced.

A system is only as strong as its weakest link – and these elevators are clearly weak. The city should have listened to the people who warned against relying on elevators and instead should have built ramps (I’m sure someone will tell me ramps were impossible in these locations).

Hello ADA? Overall, this is an element of what needs to be a long term point of conversation for Portland (and other large US cities) designing public access facilities that are both resilient and sustainable…vs. just a weakly managed ‘mitigation’. Other than basic O&M issues is that this type of facility (and others like the Hollywood Transit Center MAX access proposal) need to be integrated into a 24/7 development that attracts and generates pedestrian traffic (eyes on the street etc). A ramp or elevator facility needs to be tied to a coffee shop / bar/ PPB substation as a custodian that can limit the worst damage. Additionally the City should investigate providing a Red PortaPotty (etc.) [and long term a Portland Loo] on each end to minimize the human biowaste issue that befuddles the operations of most urban public elevators (except the Oregon City’s Municipal Elevator) and keeps away foot traffic.
https://www.orcity.org/publicworks/elevator-operating-hours

If elevators continue to not be the “complete” access solution then perhaps the Portland bike community should push for this type of solution as a “back up” or Plan B for any over (or under crossing) that TRIMET/ PBOT/ ODOT: IBR plans for? VELOCOMFORT® – The Ultimate Cyclist experience now brought to the USA by KINETIC PARKING SOLUTIONS INC
https://youtu.be/o1qU3YOzM8M