PBOT Commissioner Hardesty to speak at ‘Youth vs ODOT’ rally 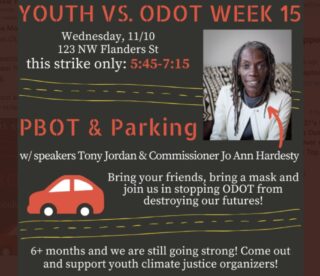 UPDATE, 2:15 pm: Organizers just announced Hardesty will not attend this event due to a long city council meeting on the budget.

Portland City Commissioner Jo Ann Hardesty will lend her voice to an ongoing protest against the Oregon Department of Transportation this week. On Wednesday she plans to speak at the Youth vs. ODOT rally that has taken place in front of ODOT headquarters on NW Flanders street in downtown Portland since early May.

The protest is organized by Sunrise Movement PDX, youth climate justice groups, and No More Freeways. This week will be the 15th edition of the event and organizers say they won’t stop showing up until their demands are met. The demands include an environmental impact statement for the I-5 Rose Quarter project, an immediate moratorium on all freeway expansion and construction projects, and a youth climate justice representative on the Oregon Transportation Commission.

Since it started at the beginning of may, these protests have gained momentum and the attention of an increasing amount of community and elected leaders. In September, State Representative Khanh Pham showed up on her birthday and said it was time for ODOT to take “serious action” to fight climate change. When the Portland Youth Climate March stormed through Portland this past summer, thousands of protestors stopped at the location to recognize the activism of these youth climate leaders.

Hardesty, who faces a re-election battle from Vadim Mozyrsky, seems to be leaning into Portland’s vaunted constituency of transportation reform activists like never before. Last week she touted a new investment in intersection daylighting, and over the weekend, local transportation advocacy influencers helped Hardesty fundraise at a virtual election house party.

One of the hosts of that party and a longtime Hardesty supporter and campaign volunteer is Tony Jordan, executive director of the Parking Reform Network. Jordan will join Hardesty as a speaker at the Youth vs. ODOT event Wednesday.

There’s also a “Climate Bike Ride” from City Hall to the event. It meets at Terry Schrunk Plaza (across from City Hall) and will be led by Bike Loud PDX Board Member Cathy Tuttle. Find details on that ride on the BP Calendar.

Who knew Commissioner Hardesty served in the US Navy?!…I did not…and not even her Wiki page knew that PDX factoid! I was watching Public Television (in Hawaii) last night and she was one of the vets interviewed for the Veterans Day.
https://en.wikipedia.org/wiki/Jo_Ann_Hardesty

I seem to recall she did. Being a veteran is something that does not resonate as well with liberals as it does with conservatives – it’s not that different than saying “former policeman”.

Everyone makes mistakes as a young person, and sometimes you fall in with the wrong crowd. Some people join the World Police.

Thank you to everyone who has chosen to serve our country in uniform.

Is BikePortland supporting Jo Ann? She is getting a lot of BP coverage. Are no other local politicians raising money or attending events of interest to BikePortland readers?

We don’t do political endorsements.

She is getting a lot of BP coverage.

She is the commissioner-in-charge of PBOT, the agency we cover most.

Are no other local politicians raising money or attending events of interest to BikePortland readers?

Yes. And we cover them too when that happens. And if you know of any we are missing, please send me the info so we can do a story about it!

Jonathan frequently seems to be trying to support JoAnn Hardesty despite her anti-bike beliefs and her super weird efforts to combat gun violence (traffic barrels). Very strange I must say.

despite her anti-bike beliefs

Oh, is this the new angle conservatives are going with? Hardesty, the only person who has shown actual support for traffic calming is supposed to anti-bike now?

I love this. Just because you don’t have any background or understanding on the issue doesn’t mean the solution itself is “weird”. Traffic calming has a long history of being used in areas with frequent drive-by shootings. Cities have been doing this in bar and nightclub districts for decades.

It would be progress if conservatives* took up the mantle of supporting biking. I mean, someone has to do it.

*Or liberals, or progressives, or anyone, really.

Steve Novick was the best active transportation commissioner we’ve had in recent years. Then the voters decided that it wasn’t really a priority, I guess.

Is the Youth vs PBOT rally going to be in Salem then? After all, they signed off on all the ODOT projects when ODOT needed them to sign off, before staff went into full denial.

That’s actually a cool idea. Have a group load up and take Amtrak down to Salem.

I do not feel Hardesty’s former Naval service gives her a pass to be a lackluster city commissioner.

Go Navy! (I was a Navy brat) but yeah to say we’ve been underwhelmed by Hardesty’s politcial achievements is a big understatement. I guess her supporting the kids with megaphones is a lot more tolerable than our governor jetting around the world to talk about climate change.

The “kids with megaphones” know that with current government policies, economic forces, and our combined personal decisions, the light at the end of the tunnel is the proverbial oncoming train. I didn’t work very hard for that analogy but if anyone has a better description of the situation it’s welcome.

My grandniece was born a few days ago. With a normal lifespan she may live into the next century. What will she see? Until she can lift a megaphone I have to speak for her and also some other children.

It’s too bad Commissioner Hardesty had a schedule conflict. On this issue I think her heart is in the right place.