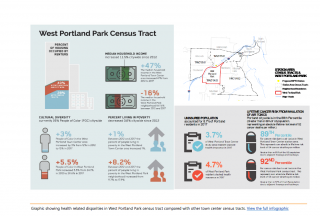 Good question. The plan is very focused on affordable housing and anti-displacement. Since the beginning we’ve discussed how unsafe the area is, and the transportation discussion (pgs 101-115) recommends a “green ring” that will build a less stressful bike/ped network around the perimeter. The green ring requires seven studies, several street improvements and two bike/ped overcrossings over I-5 to avoid Crossroads. By leading with racial equity, maybe PBOT, BES and other agencies will fund a few improvements to accommodate the growth in housing that will happen if they adopt the extensive rezoning proposal. I am very concerned about the build first model in the plan.

As Lisa points out, the data doesn’t make sense throughout the documents. The transportation safety data in the Health Equity Assessment appendix does not use publicly available data, while I’ve been using Vision Zero data. The city planners know that ODOT’s four freeway ramps and current control over SW Barbur within the West Portland Town Center contribute to the safety issues and are hopeful the jurisdictional transfer of 82nd will set a good example for this other orphan highway. Tolling I-5 will exacerbate the motor vehicle traffic on Barbur. It’s really up to us to make West Portland Town Center a place for people, not cars.

Other cities have tolls to enter many streets or roads in the central city. I think London, England has that. Barbur has problems because of the car-centric focus and BH and Canyon Road are becoming more like Barbur/99W.

I really appreciate Lisa’s writing style. Expository and not persuasive.

Just want to back this up. I’ve really enjoyed Lisa’s contributions to BP. Thanks, Lisa.

“Racial equity lens” is just the city of Portland saying we make the decisions and if you question it you’re a racist.
The “racial equity lens” was used by PBOT to quash Protected Bike Lanes (PBL’s) on Hawthorne. It’s just another way to not listen to the people.

The plan calls for a permanent ban on future construction of drive-thrus! That is sincerely an awesome idea! No more future illegally blocked sidewalks, bike lanes, public transit buses blocked, first responders blocked, and it will result in less crashes! Imagine if this was a city-wide and metro-wide law adopted! I’ve had a flat bicycle tire because of the junk on SW Barbur Boulevard’s shoulder that is the bike lane.