A motorcycle rider on Mt. Tabor? During the weekly bike race?

After a collision between a rider and skateboarder brought an abrupt end to the third week of the Mt. Tabor Race Series on June 16th, attendees and organizers were worried about future incidents in the final weeks of the series. With an open course, volunteers placed at intersections do their best to keep the myriad other summertime mountain-goers from interfering with the race.

However, one person saw an opportunity to step up and offer an additional measure of safety that hadn’t previously been used: a moto-pacer that would stay ahead of each race to make sure the road was clear of pedestrians and party-goers alike.

I caught up with Moto Man after last week’s race. He revealed himself to be Dan, who happens to be husband to another important player in Oregon bike racing, women’s cycling advocate and Oregon Bicycle Racing Association Board Member Christy Hawk. Dan graciously agreed to an interview right after he got off his bike after a long evening of work.

Dan, how did you get this job?

Well, there was a wreck last week, and I have kind of a new bike that doesn’t really smell like gas too bad, so I volunteered. I talked to Christy, and (OBRA Board President) Steven Beardsley facilitated it all.

Had you ridden this course on your motorcycle before?

No, I hadn’t. I got here a little bit before the juniors race and did a lap and was like, ‘Yeah, I remember the lap now.’ It’s been a long time since I’ve done this on a bicycle too.

Were any of the corners particularly tough?

Not really; the toughest thing were the ravers meandering down there, and trying to make sure everybody stays safe.

You did a great job. Everyone said they felt safer having you out there.

Did they? That’s good. That’s why I wanted to do it.

So, any close calls today?

Not that I saw — there were times when there’d be people coming up to a crossing and I’d be like, ‘Hey, stop, wait!’ and they’d watch me go by and then walk out into the road as the bikes came. But, I didn’t see any close calls.

How difficult was it, trying to stay ahead of riders?

It was pretty easy. The spot where you make the big 180 and go around the reservoir, that’s a big curve, so on a big bike [like this], I really had to lean it and get a little bit of a run out, cause the riders would catch me in that turn.

You were doing this, what, for like five hours straight today?

Christy: I got him a burrito!

Dan: I realized, my back is kinda sore, how long have I been on the bike? I could have ridden to The Dalles by now.

Ok, last question: What kind of bike is it?

This is a Triumph Scrambler 1200. It’s the coolest thing I’ve ever bought.

A big thank you to Dan for volunteering his time and energy to make the Mt Tabor race series even safer for everyone! 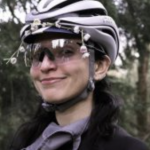 — Hannah Moraes, @han_sanitizer
— Get our headlines delivered to your inbox.
— Support this independent community media outlet with a one-time contribution or monthly subscription.

Well I’m super happy about this. I didn’t realize they had recruited, or perhaps suddenly acquired, a moto.

Was part of my apprehension jumping in this year were some of the stories of interactions with other park users sounded pretty rough. Tonight will be my first Tabor of the year, though not purely for safety concerns, my schedule was a mess.

Exactly, I had used a succession of new sport bikes for bay area commuting on rest days. As soon as it, the indoor parking or my jacket began to smell like gas, new sport bike. Finally couldn’t take the smell at all in 2002 and sold the last one. Never looked back. . .

We used to do this in years past, there were enough volunteers that we could take turns with the different heats. I didn’t realize they stopped the practice.