A new street mural on Southeast Caruthers Street in the shadow of the Tilikum Crossing Bridge was inspired by the pandemic, Latin culture, and artist Frida Kahlo. But you don’t have to know anything about the painting to appreciate it as you glide over the vivid colors on a bicycle.

“Arte, Música y Amigos” is an 460-foot long, 26-foot wide, 22,000 square foot mural that begins at the southern end of the popular Eastbank Esplanade path. It’s one of seven new plazas permitted by the Portland Bureau of Transportation and funded by Travel Oregon in a bid to create more welcoming community spaces. It’s also part of Tilikum Plaza, a partnership between the Portland Opera, OMSI, and other nearby businesses they hope will activate the space and give Portlanders another reason to get together now that nearly all Covid-related restrictions have been lifted.

The 43 gallons of paint have just recently dried and installation was last week. I got a chance to see it on Thursday and it’s absolutely fantastic! The colors are so bright and dynamic, and the visual elements stand on their own, yet connect with the broader theme at the same time. The folks at Portland Opera have classical music blaring from the speakers, so if a piano piece is on you can ride over the keys and it feels like you’re playing them.

Another bonus: Not many people drive on this quiet section of Caruthers, so having the mural makes it feel even more calm and inviting than usual. 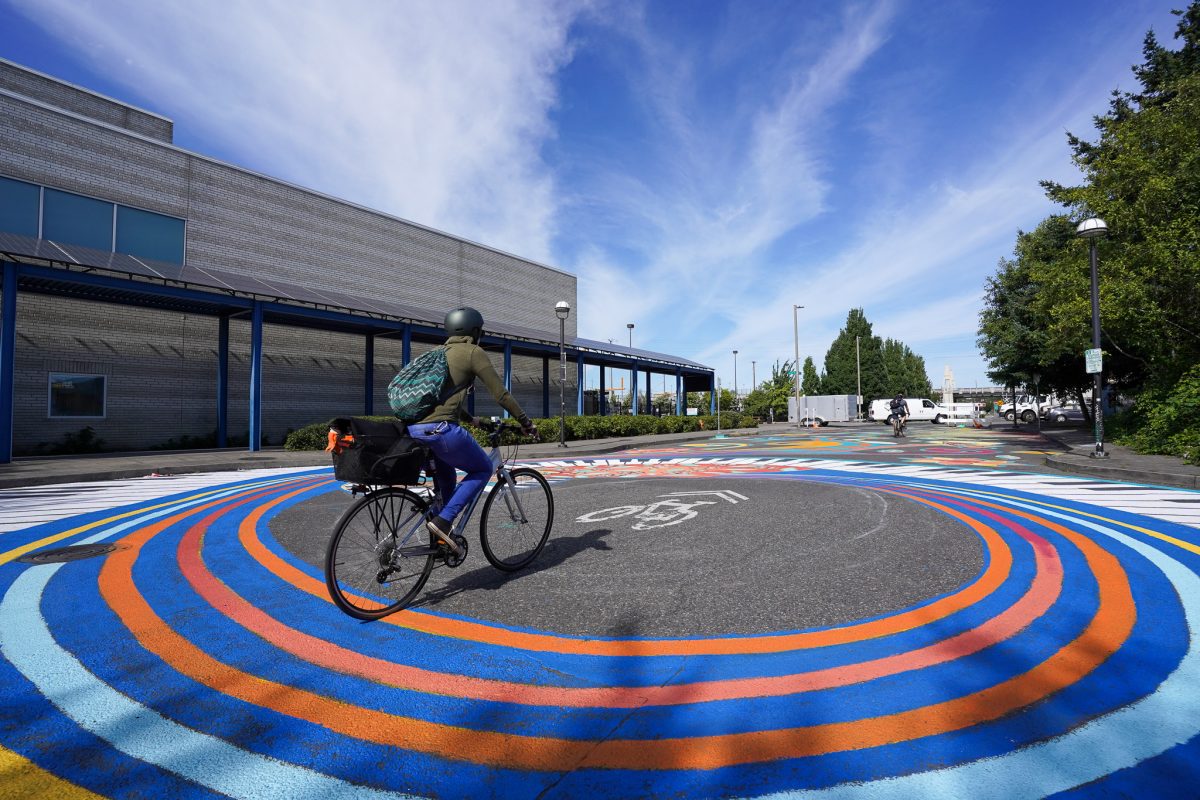 “All the depression and loneliness [from the pandemic], I released it. This mural brought me back to life.”
— Jessica Lagunas, artist

Artist Jessica Lagunas, who’s active with many local art groups, told me on the phone today that legendary Mexican painter Frida Kahlo was one of the murals main inspirations. A huge fan of Kahlo’s work, Lagunas and many other local artists were excited for a major exhibition of her work at the Portland Art Museum. Then the pandemic happened and everything got postponed. When Portland Opera reached out to IdeAL PDX, Kahlo’s influence found its way into the mural design. “You can see Friday in the flowers and the colors and the happiness of life,” Lagunas shared.

When the City of Portland showed her the standard color options for street painting, Lagunas said they wouldn’t do. Not for something that she wanted to truly represent Kahlo’s aesthetic and “Latinidad”. “So they agreed to give us the colors we needed and I was able to mix them to bring all that happiness to the work.”

The Opera wanted the painting to build and unify the community, a goal even more important coming out of the pandemic. Lagunas wanted the piece to have a Latin feeling, but it was important to have all communities have something they could relate to in it. For example, they initially were going to create a quetzal bird for its symbolism and importance to Central Americans. “But not everybody identifies with the quetzal,” Lagunas said, “Se we decided to go with a hummingbird, which are everywhere around here and are a spirit animal for native Americans.”

Other cultural influences include the djembe African drum being played by the most prominent female figure and tree roots that might also remind viewers of the mysterious Nazca Lines in Peru.

But in the end, for Lagunas, it comes back to Frida Kahlo. “I believe in what she believes; that art will make you survive anything… We went through a huge pandemic that impacted every single one of us. All the depression and loneliness, I released it. This mural brought me back to life.”

Cool. Love it!
Unfortunately, Travel Oregon is going to have to do a lot more than spring for 43 gallons of paint to bring tourists back to Portland. None of my friends want to visit anymore. 🙁

I’m really OK with that. We have a lot of healing to do here in Oregon. This is just a start.

Roberta, Ok, with what? Not having my friends visit? 🙂 I’m not okay with that. 🙂

I love how the piano keys start off like the Yellow Brick Road in Munchkinland. Wouldn’t it be cool if they could continue on down the street? Beautiful work, and I look forward to seeing it often.

I love the painting! It’s vibrant and beautiful and is such a pleasure to see each time I bike that way. Thank you to the artists and Travel Oregon for supporting beauty in this amazing city.