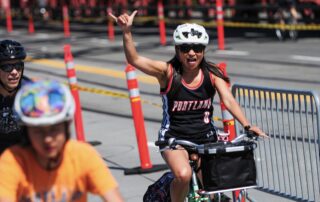 Of course one of the greatest Portland Trail Blazers ever rides a bike.

Carrying on the legacy of Blazers champion Bill Walton, who used to bike to practice back in the ’70s, current star Damian Lillard said in a new Men’s Journal interview that he too has started pedaling more than an exercise bike.

Here’s the snip that caught our eye:

Your GOAT Spirit rap video shows your home gym, but do you mix any outdoor sports into your fitness routine?

Last year during quarantine, me and my fiancée bought bikes and started going on rides. When she said, “Let’s get some bikes” I was thinking, like, Mongoose bikes. But we went to this bike store. I didn’t know bikes were this expensive.

How much did you spend?

My bike was $2,500. It’s an electric bike. It’s crazy because I didn’t even know these kind of bikes existed, but I like it a lot.

That’s right folks. One of the NBA’s brightest stars rides an electric bike and he likes it “a lot”.

If you hope to see him cruising local bike lanes and paths, keep your eyes peeled on Old River Road in West Linn. Other places to ride near his house are the new bikeways on Willamette Falls Drive and downtown Oregon City. (We really need get that West Linn-Oregon City carfree bridge built ASAP now!) The Lillard family will also be happy to know that plans for major upgrades to Highway 43 will include protected bike lanes for extra safety.

And Dame, if you read this, I’d love to do an on-the-bike interview sometime. Think of it like Carpool Karaoke, but we’d roll on bikes instead of in a stuffy old car. And without the singing — unless of course you want to share a few bars.

By the way, here’s a map of good bike routes in and around West Linn if you need it:

Have fun out there. And good luck in the playoffs. Go Blazers!

An athlete of Dame’s caliber rides an electric bike? Huh? It actually makes no sense. He is surely much stronger than his lady, and needs the complimentary muscle work that a human-powered bike provides. He does not need electric assist. Some salesman did a number on him.

Good to know that even an athelete of Dame’s caliber can’t escape getting mansplained about what he “should” be riding. Him and his fiancée got bikes (at a bike shop too!), they’re riding it, and he’s liking it a lot. That’s a win.

As long as he keeps hittin’ those 3’s he can ride whatever bike he wants!

Have you ever checked the vertical jump of a cyclist?
He’s better off on an ebike until retirement.

Perhaps he already works out plenty, and is using the bike for fun?

As someone who does as much sport-specific training as he does (with world-class trainers and health professionals to help), he doesn’t NEED any additional muscle work. But an ebike would actually be a perfect active-recovery tool for him. He’s still moving his legs, but can push as much or as little as he feels he needs, which for a basketball player would be great to loosen up the legs a bit while limiting pressure on the knees.

Wait until you find out how many high caliber athletes drive cars!