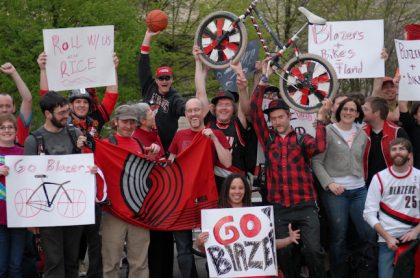 Part of our excellent group.
— Gallery/slideshow below —
(Photos © J. Maus)

Last night Rip City and Bike City finally came together. We had a great time rallying, riding and cheering for the Trail Blazers at their last home game of the season. We put bikes on the map at the Rose Garden like never before. 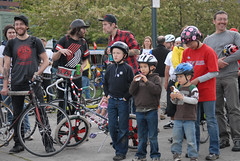 All types of people at the rally.

With about 100 tickets sold for the Bike to Blazers section added to the other folks who biked to the arena, I would guess there were nearly 200 bikes parked at the Rose Garden last night!

At the rally in Waterfront Park, we had music from 94.7FM, the local TV media got some footage of biking Blazer fans, folks put Blazer bells on their bikes, and we heard from a few notable Portlanders. Rob Sadowsky, the new leader of the BTA (he doesn’t officially take over until July 1) made his first big Portland appearance. Blazers Senior VP of Business Operations, J. Isaac let everyone know how serious the Blazers are about encouraging biking to the arena. Metro Councilor Rex Burkholder, who was the leader of the BTA when they sued the City to put bike lanes in front of the Rose Garden Arena, also addressed the crowd.

For me, the best part of the rally was all the families and kids that showed up and seeing all the spirited fans in their Blazer best…

With big Blazers flags flying from tall bikes (thanks Dutch and Garrett!), we rolled out on a ride to the arena. We got a lot of smiles and stares and did a victory lap around the Memorial Coliseum and Rose Garden before settling in at the plaza between the two buildings. We had plenty of bike parking (thanks TriMet!), the kids made signs, the Community Cycling Center snapped photos for their I-Ride campaign, and folks tried their best to ride Neal Fegan’s amazing sculptural velocipedes. 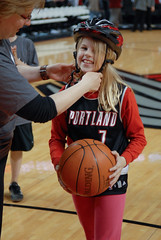 8-year old Emma Cooper won the
Bill Walton-signed helmet and then
wore it before taking her shots on
the court after the game.

In the arena, we all sat near each other (although not quite a big bike block of seats like I’d hoped). We got some prime time coverage on the JumboTron and a call out from the arena announcer at the end of the first quarter. Joel Holly from the BTA proudly held up his Bikes + Blazers = Portland sign for all the nearly sold-out crowd to see.

We cheered as hard as we could (Evan Ross from Portland Bicycle Tours even tried to get a wave started to no avail), and it was an exciting game, but the Blazers couldn’t quite deliver a victory.

At the end of the game, a big group of us got to go onto the court to take a few shots. This was one of the highlights of the night. What a thrill for the kids and adults alike to stand on the court and shoot baskets in an NBA arena. My heart was racing as I took my shots and I airballed twice… but I was proud to see many others make their shots so rest assured that us bikers were not embarrassed.

Big thanks to everyone who helped pull this event together — especially Justin Zeulner with the Rose Quarter, Lisa Swan from the Trail Blazers group ticket office, and Heather McCarey from the Lloyd TMA.

This was the first time the Blazers organization has really embraced this event. We are already making plans for next time and you can expect this event to grow in the years to come.

We had a blast – Go Blazers! Let’s go even bigger and better next year!

Thanks Jonathan. Grace and I had a super fun time.

Jonathan, thanks again for a fantastic event. So much fun. We really appreciate you getting this rolling and can’t wait for next year.

This looks so wonderful, and a lot of fun!!

I hope BikePortland and the Blazers make this happen again next year (or perhaps, even sooner…).

And I’m sure you could fill 200 seats next time with bikey basketball fans!

ps – I just read the article in depth, and wow. What a lot of hard work you put in to organize this event and pull it all together. Big thanks!

I was sitting next to the awesome friend who was starting the wave, so I can’t take the credit, but I guarantee we’ll make waves next year! this event is going to grow big – I hope to see you all next year!

Had too many new baby related commitments at home to make it this year but love bikes and basketball and love this concept, love the way you executed it Jonathan. Very community building and big thinking working to expand the bike culture into other activities loved and supported but many who don’t ride bikes or ride them regularly… yet. Baby will be old enough for the trailer next season.

Where can I find one of those Blazers bells now?

Sounds like it was a blast! Biking is certainly the best way to get to an event at the Rose Quarter. I’m drooling over that picture of the tableful of Blazer bike bells – wish I could have made it to the rally just for an opportunity to get one – well, and all all the rest of the fun.

I wish I could justify supporting the ridiculously high salaries of professional “athletes”.

I don’t see why they’re called “athletes” with the quotes like that.

I mean, look at all the running, the jumping, the big muscles and all that. Those guys are athletes.

Go be sour grapes somewhere else.