PBOT adds concrete diverters onto NW Flanders, says bridge and greenway could open by May

The City of Portland shared a delightful surprise yesterday when they announced the installation of concrete diverters on NW Flanders. Yes you read that right: Concrete diverters. 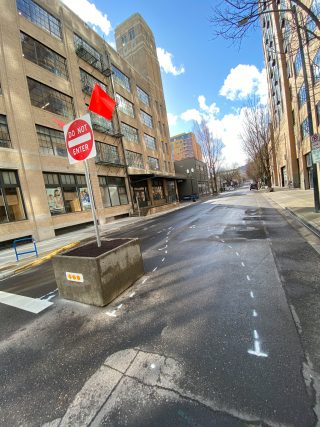 This diverter prevents drivers from turning left (west) off Flanders onto 10th.

In a simple yet powerful move, the transportation bureau has prohibited driving on Flanders between NW 8th and Park thanks to six large concrete planters. The aim of the diverters is to reduce the volume of auto traffic on Flanders, which is pegged as a street where people can walk and bike without the stress of cars and their drivers. Each planter is about two-feet high, two-feet deep, and four-feet wide. Signs placed in the middle of one of the planters inform people that only bicycle users are allowed through. They’re placed right outside the existing crosswalks that connect the North Park Blocks, meaning the diverters will not only reduce the volume of drivers on Flanders they will also create a safer, more protected environment for people walking and rolling in the park.

These diverters are part of PBOT’s plan to make NW Flanders a neighborhood greenway that will eventually connect Waterfront Park near the Steel Bridge to NW 24th. The lynchpin in this greenway is the Flanders Crossing Bridge which was installed in late January.

PBOT has also dropped a diverter at NW 10th to prevent people from turning right (west) onto Flanders. Once the greenway project is complete, PBOT will install diverters at eight additional locations (see map below).

(New signals and curb extensions at NW Flanders and 14th, just one block east of the new carfree bridge over I-405).

One block east of the new bridge at NW 14th, PBOT has added curb extension to the corners of NW Flanders. New signals at 14th are also being added to further improve biking and walking safety while limiting turning movements of car drivers. It’s all in the name of establishing Flanders as a major street for non-drivers, something that has been planned and promised for well over a decade.

According to PBOT Communications Coordinator Hannah Schafer, the greenway and the bridge should be open and ready to ride by this coming May!

Stay tuned for more updates on this project and special promotions designed to entice you to ride on Flanders. 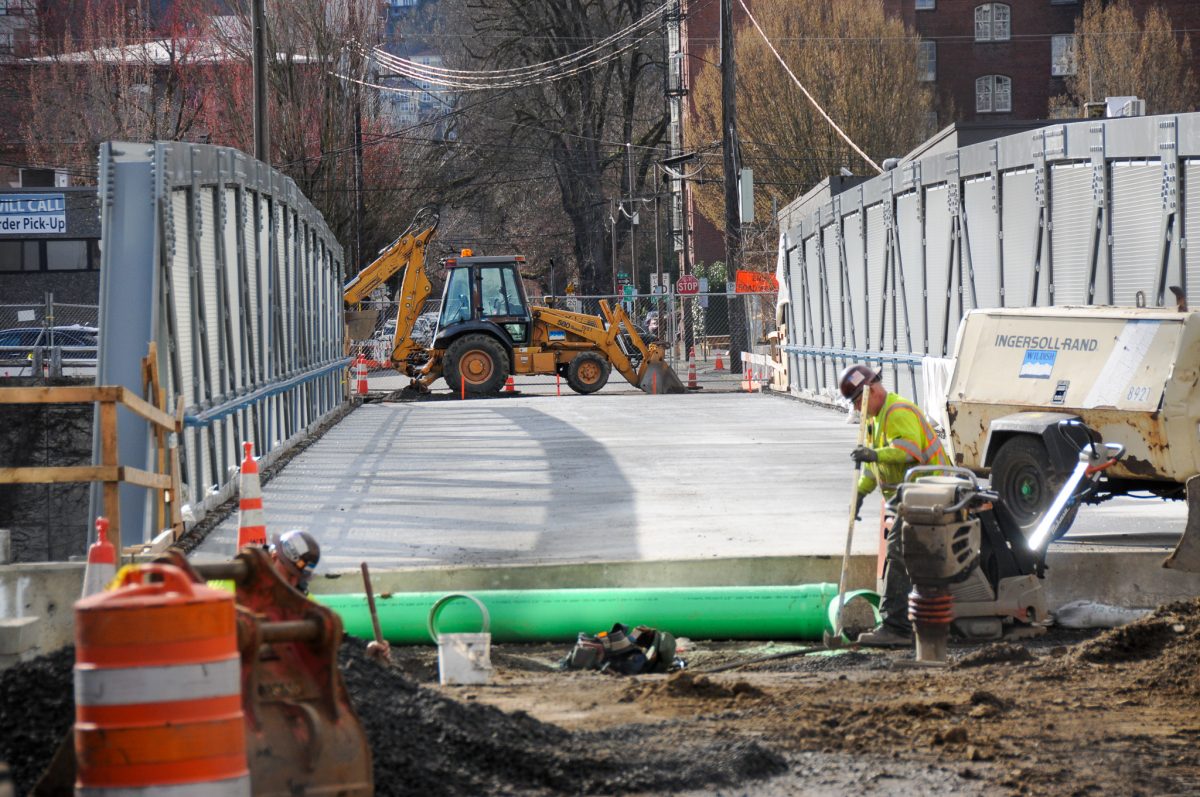 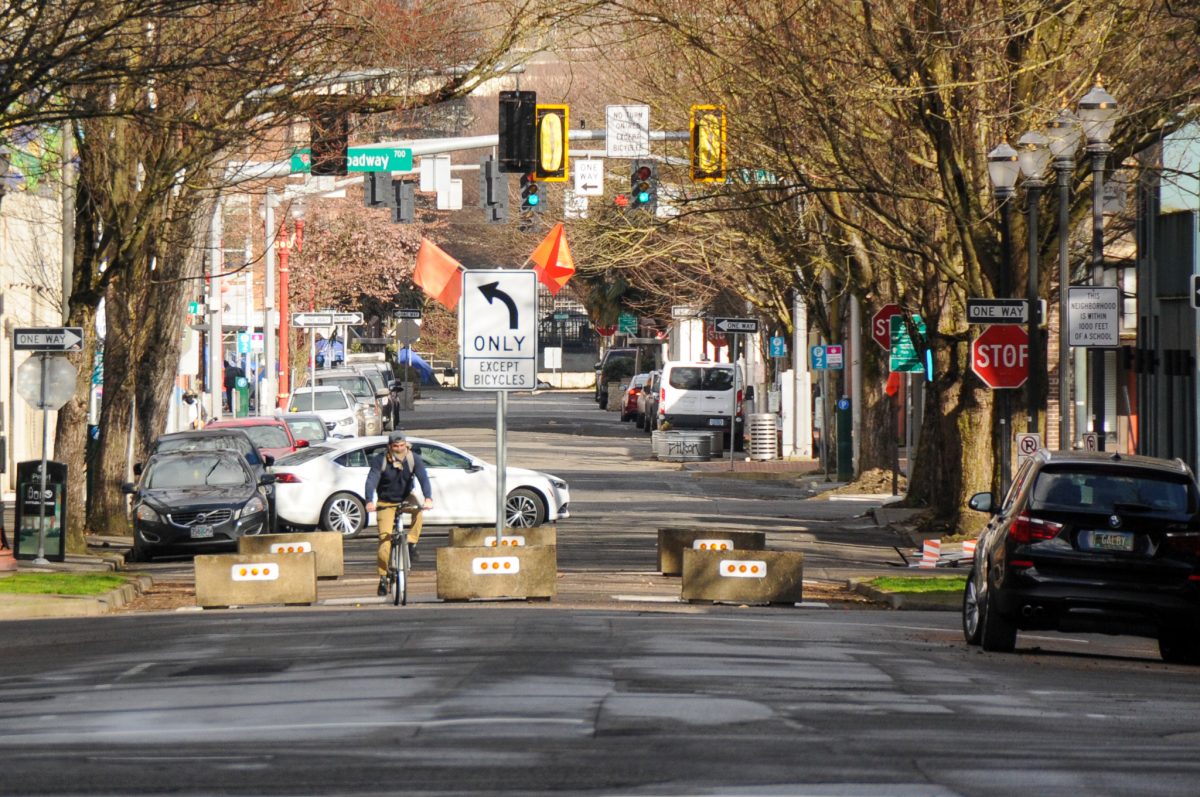 Woohoo! Now put in diverters on all the greenways, both planned and present.

Good stuff! Any word on when that “future Naito crossing” is going to happen? Connection to Steel Bridge is a key (selfishly, for me).

have asked. will update if I hear anything new.

As of October last year, PBOT said that the Naito crossing is in design and that they expected it to be in construction in 2022. The Davis/Couch couplet is a slightly awkward but usable alternative that lets people access the steel bridge until then.

How many people know that the character is named after the street?

So much joy has been stoked by this news. I hope PBOT sees that these relatively “simple yet powerful” (as you say) actions are a source of great hope engendering a spirit of community. Thank you, PBOT! Looking forward to seeing what else is in store in what will hopefully be a revolutionary year for active transportation in Portland.

Please follow up with the same diverters every 5-8 blocks on every greenway. They all need it. We have a systemics problem with too many cars on these roads and it requires a systemic, not piecemeal policy response.

Love it. Now, if I just had a destination to still ride to the north of the bridge. Here’s to hoping for successful vaccination saturation before the end of summer.

Oop. West of the bridge.

It looks like they didn’t leave enough space for cars to squeak through. Very glad to see that. Too many recent diverter installations have 7-8 foot gaps, making it way too easy for scofflaws to drive right through, such as the one at Clinton and 28th.

I think the design of this diverter is pretty ugly. I wish that PBOT would be aiming higher than just plopping some concrete planters in the middle of the road. But I’m just nitpicking and griping. The important thing is new diverters!!! How long has it been, 18 months since PBOT installed a new diverter on a greenway?!?! This is a big deal!!!

They can easily be painted and have flowers put in them 🙂

Thanks for not doing this east of Broadway!

Why? Also, these are coming east of Broadway, check the corridor map above.

In an ideal world, the PBOT Diverter Installation Team is constantly working all around the city, bringing diverters to all the greenways. And can we get a diverter that’s even bigger?! A Jersey barrier-sized diverter would be a good start. Those old planters are cute, but probably won’t work out all that well.

Please add some on the Lloyd to Woodlawn Greenway