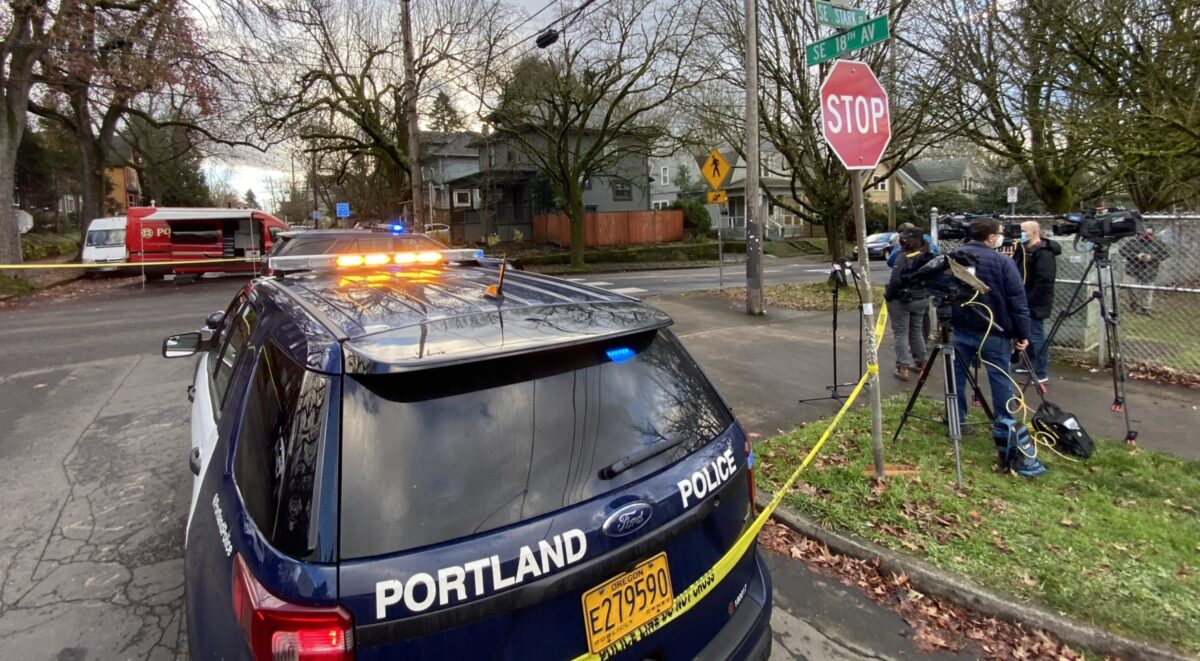 Police and media at SE 18th and Stark on Monday.
(Photo: Jonathan Maus/BikePortland)

“We are committed to a full investigation so that the person involved can be held accountable for these senseless acts of violence.”
— Chuck Lovell, Portland Police Chief

The statement says a total of nine people were injured and one was killed. Five victims were transported to a hospital via ambulance, one went by private vehicle. Two of them were on bicycles and seven were on foot at the moment they were hit. “One victim, due to head trauma, can’t recall if they were in or out of their vehicle when they were hit,” PPB said in an updated statement.

Fortunately most of the victims have minor injuries and are on the road to recovery.

The police now say the first call about “erratic driving” came in around 12:00 pm, one hour earlier than we reported yesterday. The first call was from someone at Southeast 26th and Stark who reported, “a vehicle traveling at a high rate of speed and narrowly missing a pedestrian.” Then another call came in about 1:00 pm that said, “the vehicle [is] driving recklessly in the area of Southeast 36th Avenue and Southeast Oak Street.” The first report of a collision between the driver and someone on the street came in at 1:02. It happened at SE 33rd and Pine, right at the western edge of Laurelhurst Park. PPB is still checking dispatch records for any other calls that might have been related to this incident. Other reports cited by the PPB say the driver was going about 55-60 mph through residential neighborhoods. 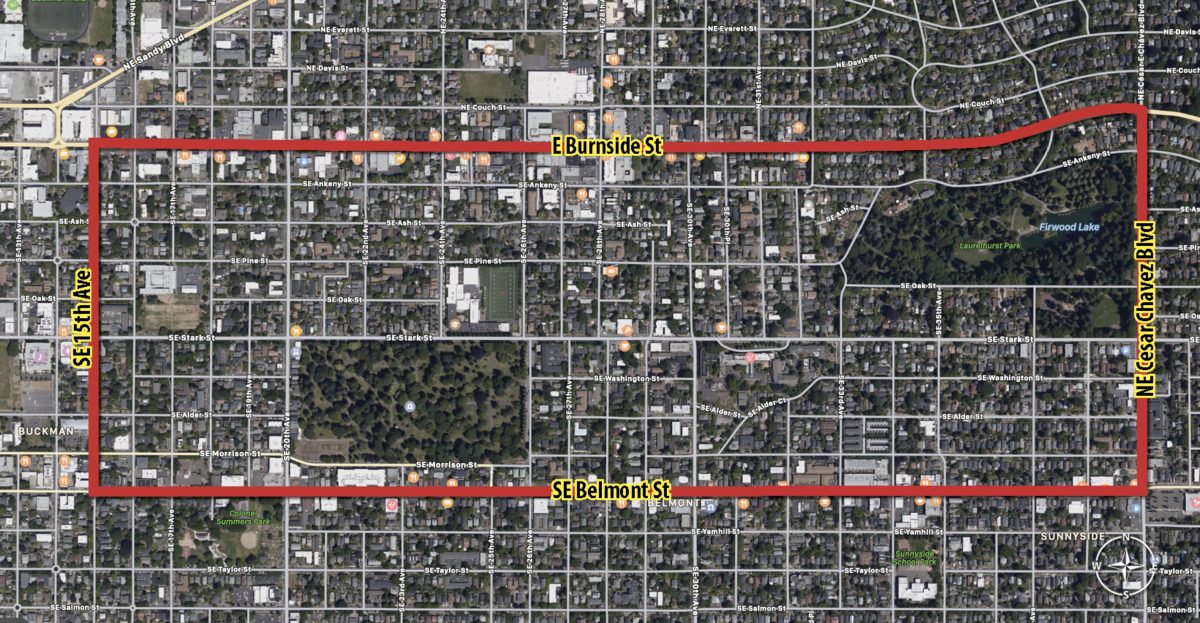 The suspect, who was corralled by community members and then forcefully tackled by PPB officers after he tried to escape on foot, is currently in a hospital. PPB says they have not found evidence that this was an act of terrorism. “Detectives did not find bias indicators, nor do they believe this is politically motivated,” the statement reveals. “Detectives say that the driver’s actions did show intent to hit and injure people.”

The driver’s blood is being tested for the presence of intoxicants. He has not yet been booked into jail. His identity will be revealed at that time.

“The multiple hit and run crashes by the same suspect yesterday were traumatic for our community. Thank you to the many community members who responded to assist victims and alerted police to the suspect. All of us at PPB send our sincere condolences to the loved ones of the person who was killed as well as our hopes for recovery to those injured. We are committed to a full investigation so that the person involved can be held accountable for these senseless acts of violence.”

Investigators working the case are still asking the public for help. If you saw anything, have video on your phone or business surveillance camera, or if you come across what might be evidence on the street, you are urged to contact Detective Joseph Corona at (503) 823-0508 or email joseph.corona@portlandoregon.gov and reference case #21-22752.

UPDATE, 3:00: PPB has released name of woman killed and a statement from her family:

“ The woman who died in yesterday’s hit and run incident has been identified as 77 year-old Jean Gerich of Portland. The Oregon State Medical Examiner determined she died of blunt force trauma and ruled her death a homicide.

Jean’s family has been notified. They provided the photos of Jean and the following statement:

“Jean Gerich was not a nameless victim. She was a loving mother of two. She was a proud grandmother of five, ages 4 to 16. She would have turned 78 in twelve days. She beat cancer five years ago. She received her first vaccination shot last week and was overjoyed to get out in the world again. She has lived in the city of Portland since 1972 and for those 48 years she has loved her community of friends, Forest Park, and the proximity to nature.”

May she rest in peace.

They probably didn’t respond because they were afraid of being accused of some kind of profiling or over-reaction to something that is not a priority i.e. traffic enforcement.

To a call of “erratic driving”? We would need a lot more cops if you wanted someone to respond to every one of those calls.

Or maybe a more efficient and responsive PD.

We active transportation safety advocates are often quick to move toward discussions, analysis, and opinions about what went wrong, who is to blame, and how this kind of thing can be prevented. That is important work. We also need to pause to honor the dead and offer comfort to their loved ones.

Additionally, when we honor and personalize the real people who died, and those they left behind, we honor ourselves for the advocacy work we do. When our work helps prevent a tragedy, we never know whose family and friends may have been spared this kind of grief. It could even be our own. We can think of Jean Gerich and her loved ones when we work to help improve bicycle and pedestrian safety.

Thank you for the brief description of Jean’s life and the sweet photos. My heart goes out to all who knew and loved her.

Multiple victims, including one dead and several sent to the hospital, but somehow I bet this won’t count in the statistics various organizations compile on mass shootings. Because even though I was taught in Drivers Ed (boy, wouldn’t it be neato if Oregon finally started requiring driver education like other states?) to treat a car as a deadly weapon, it isn’t thought of as such by most people.

It took multiple officers to hold this killer down. Yet nobody is talking about DRUGS.

The police did take some blood to analyze, we will know if drugs were involved. However, don’t discount plain old CRAZY as a possibility to require multiple police to corral, tackle, and hold him down.

How many social workers would that be?