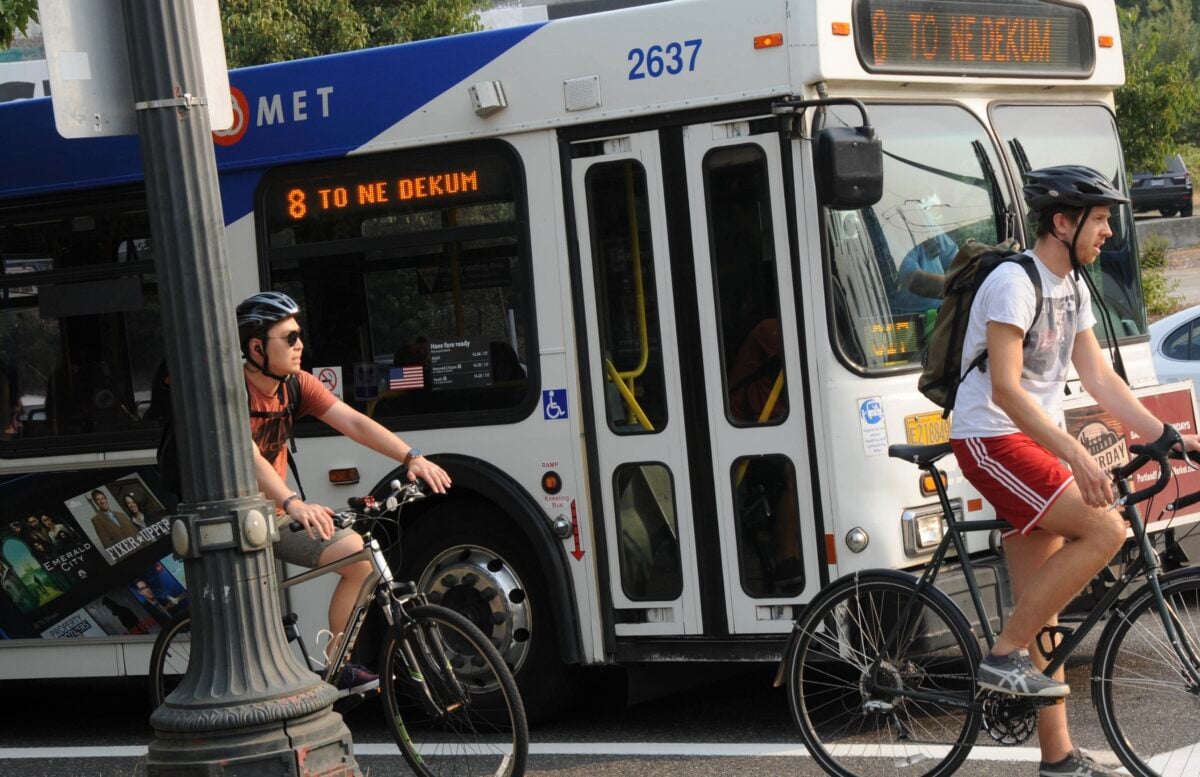 New leadership is a golden opportunity for TriMet — and for the entire Portland region.
(Photos: J. Maus/BikePortland) 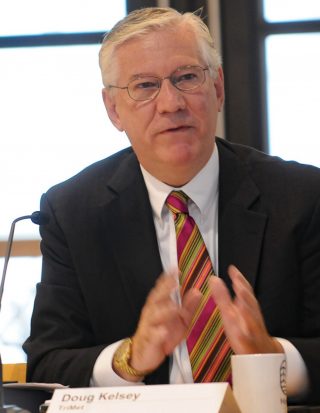 Outgoing TriMet GM Doug Kelsey at a meeting in 2018.

On December 17th, TriMet General Manager Doug Kelsey announced his retirement. Six days later a coalition of 25 environmental, social justice and transportation-oriented nonprofit advocacy groups (including Bike Loud PDX, Oregon Walks, The Street Trust, and the Portland-based Safe Routes to School Partnership) wrote TriMet a letter demanding a better GM selection process than the one that led to Kelsey back in 2018.

The Getting There Together coalition’s letter (PDF) was backed up by a similar letter (PDF) on December 24th signed by the entire Metro Council as well as dozens of elected officials from throughout the Portland region.

On December 28th, TriMet announced they would postpone a Board of Directors meeting (initially set for December 30th) where they planned to approve the general manager job description. According to an email from TriMet Public Affairs Manager Roberta Altstadt, the meeting was cancelled because board members wanted more time to hear public input.

For local transit activists, this must feel like deja vu.

Just two years ago TriMet faced strong criticism from many of these same groups for what they claimed was a rushed, secretive process. Kelsey was an existing TriMet executive prior to being chosen for the top job.

“Unfortunately, we feel we need to bring forward our concerns again, which have not changed despite great rhetoric from the agency,” reads the coalition’s letter. “We demand a more inclusive and transparent hiring process that engages directly impacted communities.”

This time around there’s an even greater sense of urgency around TriMet leadership due to the immense impacts on the transit system due to covid-19 and an unprecedented scrutiny on climate change and racial and social justice issues.

“If the summer of 2020 has taught us anything, we need leaders who think more broadly about how all of the tools of public service can benefit all Oregonians,” reads the letter from Metro Council and elected officials.

TriMet will also be urged to select someone who is willing to stand up to the Oregon Department of Transportation and the highway industrial complex. The agency’s previous GM Neil McFarlane was an advocate for freeway expansion projects as a reasonable compromise to fund transit infrastructure. For his part, Kelsey oversaw a Metro funding measure that many felt had too many driving-centric highway projects and didn’t go far enough to fight climate change.

TriMet’s next Board of Directors meeting is set for January 27th. They hope to have a new GM on board by spring.

Going to be difficult to find a GM that will “fight” Highway Industrial Complex when the current Chairman of the Board of TriMet is an ex-head of ODOT.

It also doesn’t help that they are appointed by the governor, the same person who wants to ram the highway expansions down Portland’s throat. As far as I can see, none of the board are even remotely transit-related. https://trimet.org/about/board.htm

Golden opportunity indeed – those with the gold will appoint the next GM.

What is the best means for community members to support this call for a more transparent hiring process? Writing a letter to Governor Brown? Writing a letter to the TriMet Board and putting it in the mail? I would love to see someone in this position who supports putting new MAX lines through town centers, rather than 100 ft parallel to the highways. Maybe then we could justify the huge cost of that infrastructure.

LOL good luck with that.

This is precisely the problem with the TriMet board; unaccountable, uninformed and unelected pawns who do whatever the ruling transit-intelligentsia within TriMet suggest. Occasionally one is swapped out as required by shifting virtue signaling priority.

Years of horrible oversight failures are resulting in a death spiral. But don’t worry I am sure the next GM will be a POC, so, all good, nothing to see here! And look for TriMet to be “fare free” so you can feel like you are saving the world with your payroll deduction for a service you will never use because it is so wretched.

I would love to see someone in this position who actually listen to public input when they ask for it. Probably won’t happen, but we can dream.