I’ve been walking a lot more lately and the other day I came across something in my neighborhood that shocked me. In a good way. In a wow-this-is-amazing-how-did-I-not-know-this-was-here kind of way. 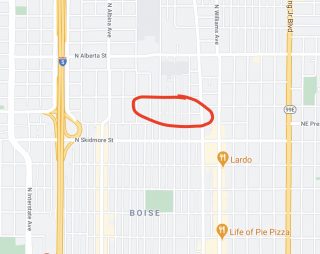 With a nagging knee injury that’s kept me from biking since October and a new dog who loves heading out with me, I’ve been walking through my part of north Portland more than ever. My boundaries are usually Lombard to the north, Martin Luther King Jr Blvd to the east, the Willamette bluffs to the west and the Humboldt/Boise neighborhoods to the south.

I like to think I’m familiar with these neighborhoods since I’ve lived in them for nearly 17 years now. But both biking and driving tend to give us a very limited view of a place. That’s one reason I love walking. I find myself on blocks of streets I’ve never been before.

A few days ago my son and I were weaving our way east from the Piedmont neighborhood to find food on lower Williams Avenue. After walking past Jefferson High we found ourselves on North Commercial Ave. About a half-block south of Blandena we came to an unfamiliar section of a familiar street. It was North Going Street like I’d never seen it before.

Further east and west I know Going Street well as Portland’s marquee neighborhood greenway and the main vein into Swan Island respectively. But in the 10 blocks between I-5 and N Vancouver Ave, Going Street is something very different. In fact in half of those blocks Going Street doesn’t exist at all.

For three blissful blocks between Congress and Gantenbein, Going is a carfree path. And on one section there’s a wonderful new, large-scale mural by Portland artist Daren Todd (@TheDailyDaren on Instagram). It has several panels that recount the past and present racism and struggle for civil rights in the neighborhood.

You’ll notice in the photos that there are no curb ramps, so this isn’t a great, through bike route. But for folks in the neighborhood (especially kids!), this must be a great place to walk and roll.

I’ve lived in this area for 17 years and somehow I had never been privy to this fun piece of hidden Portland (seriously, how come none of you told me about it?!). Next time you’re in the area, I highly recommend checking it out. When you do, keep in mind that the path crosses two alleyways (which are open to car users) and when you cross streets you’ll be mid-block and other people won’t be expect you to be there.

I love it when you report your finds. I didn’t know about this section either, but will check it out. I think my fave report you did was a ride with your kids to parks. I tweaked it a bit and led it as a club ride several times. Thanks, Jonathan!

We’re so glad that you enjoyed discovering the mural – and hopefully learned more about the history of Black Portlander’s resistance and resilience! It was just completed in September and was funded primarily by neighbors, friends and local businesses.

One
Reply to  Jeana Frazzini

I love that mural too. And I’m grateful for Portland’s Black Resistance (today and of decades past)

I walk through this section a couple times a week. Mixed with alleys north and south, it makes for some interesting neighborhood loops. I believe the artist of the mural above is the same artist who OHS commissioned to add pieces to plywood boards covering smashed OHS windows?

One of the best things I’ve done with my kids since they were little are “epic walks.” When they were babies we would load up the stroller and walk from Alberta where we lived at the time to downtown, then take the bus home. Now that they are middle schoolers, and we live in inner SE we walk to Mt. Tabor, downtown (not lately), and the Alameda steps. This is a great city to walk in although I wish the city would do a better job of keeping sidewalks clear and safe. I know I’m jaded these days because I look at that green, and think: in my neighborhood, that green would be covered in garbage, and other detritus.

It’s great how these (OLD) pedestrian/bike only cross streets/alleys are the best diverters. I think it’d be great to see a lot more cross streets & intersections turned into pocket parks and dead ends for cars. It ALREADY IS a great item in the PBOT playbook to turn intersections into neighborhood parks. I lived on NE 13th near the Holman pocket park from 2012-16 and all the neighbors told me how much better the street was post-park. C’mon PBOT!

Very typically in Portland, the ends of blocks don’t have any houses that front on them–they just have the sides of the houses at the ends of the block. So there must be hundreds of locations where the streets at the ends of blocks could be turned into parks/neighborhood play areas/greenspaces, without interfering with access to houses. Hundreds of acres of paving could be removed, thousands of trees planted, etc.

And quite cheaply for an interim safety fix.

Hope you have health insurance and can get physical therapy on your knee. Three months is a long time to be off the road! PT has helped me greatly with all of my aging-male (a group you are joining) sports-related injuries. OHSU is good but I think West Portland PT is better.

Anyway, the shared paths, trails, and stairs are the best things about Portland.

How on earth this has not been turned into a campsite / chop shop is beyond me.