Crews working at the Federal Courthouse in downtown Portland have moved a concrete wall and fence that has illegally blocked two downtown streets for three months. The move comes as a lawsuit filed Wednesday by the City of Portland and City of Oakland against the U.S. Department of Homeland Security calls out the fence as an illegal incursion of our public right-of-way.

The fence on Southwest Main (between 2nd and 3rd) and on 3rd (between Salmon and Main) was erected by contractors working for Federal Protective Services on July 18th after weeks of nightly protests. U.S. Attorney Billy Williams said it was installed, “To de-escalate tensions between protesters and federal law enforcement officers, and to allow much-needed building repairs to begin.”

But the federal government never got permission to erect the fence and has refused to remove it despite City of Portland demands. Feds claim they have a right to protect federal property based on United States Code section 40.

The fence completely blocked a travel lane and has forced bicycle and car users to merge into each other and goes against City of Portland safety guidelines. Not only did the fence create a safety hazard, it was also placed in the public right-of-way without a permit. On July 23rd the City of Portland sent a cease and desist letter the regional leader of the U.S. General Services Administration (the agency in charge of the courthouse).

“The structure completely obstructs the bike lane and needs to be removed promptly,” transportation bureau Director Chris Warner wrote, adding that it would be subject to fines and legal action. 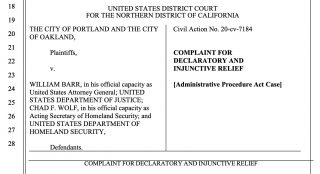 On July 28th, PBOT Commissioner Chloe Eudaly said the agency would fine the federal government $500 for every 15 minutes. According to FenceFine.com, the bill owed to Portland is around $4 million.

At a Portland Bureau of Transportation Budget Advisory Committee meeting last night, PBOT Director Chris Warner was asked if the feds had paid their fine. “I wish they would,” Warner answered, “They’ve been clear they won’t pay.” Warner added that PBOT is talking with the City Attorney’s office whether or not the City should take further legal action to enforce the fine.

On Wednesday (10/14) the City of Portland signed onto a lawsuit with the City of Oakland against U.S. Attorney General William Barr and Acting Secretary of Homeland Security Chad Wolf. As reported by Bloomberg News yesterday, a spokesman for Portland Mayor Ted Wheeler said, “The case challenges the starkest example of the federal government illegally imposing its over-reaching policies onto the streets of Portland in violation of local community values and needs.”

The fence is named in the lawsuit as part of a list of unauthorized actions taken by the federal government in Portland:

The lawsuit (PDF or embedded below) also states that on October 7, 2020 the FPS emailed the City of Portland that its contractor had moved the fence to allow access to a storm drain and expected to move the fence back from the bike lane “in the next few weeks.”

Relations between Portland and the federal government remain tense as the election nears and President Trump threatens to exert his power over cities run by Democrats.

We’ve reached out to Commissioner Eudaly and Mayor Wheeler’s office for updates and will share more when we hear back.

The fence is still blocking the bike lane, it’s just moved a bit.

When I went by this morning and took the photo above they were actively moving it out of the bike lane.

Was the fencing contractor ever identified? Why would they not send the fine to the contractor who put up the fence?

The fence doesn’t appear until page 26 of the lawsuit document, for about 2 pages. It’s mostly about how the feds violated other city policies, including Oakland’s.

I wonder if they got a permit to remove the fence (street use permit).