A photo gallery of Portland’s new plazas and parklets

(A sampling of Portland’s new, on-street dining options. Click for captions, scroll down for many more. All photos by Jonathan Maus/BikePortland)

I’m a big fan of anything that forces people to think about the impacts driving has on our lives — especially when it comes to how much of our streets and public spaces are dominated by cars. That’s why I’m a huge supporter of the Portland Bureau of Transportation’s Healthy Business permit program.

On a recent sunny Saturday I rode around town and was amazed to see just how successful this program has become. On street after street, I saw dining tables, chairs, umbrellas, and lounging spaces on what used to be parking spots and traffic lanes. These were serene sights in a city many believed was “under siege” in a war between “violent anarchist mobs” and police.

Since it was launched in May, PBOT staff have worked furiously to keep up with demand. So far they’ve issued a jaw-dropping 657 permits.

Similar to their sidewalk cafe permit, PBOT (and their partners at the Bureau of Development Services, who oversees parking lots) is giving business owners relatively free rein to use parking spots, parking lots, and streets to seat customers. In response, opportunistic Portlanders are creating new commercial spaces with a wide array of materials. Some are framing-in sturdy structures with foundations and roofs, others are simply placing a few chairs and some rope in the street.

The program has so far managed to avoid major controversy, but it’s not without critics.

Dr. Marisa Zapata is director of the Portland State University Homelessness Research & Action Collaborative and a member of Oregon Governor Kate Brown’s new Racial Justice Council. Last week she expressed concerns about the program on Twitter. “Looks like a lot of formerly public land now being used privately,” she wrote. “Do I get to sit there if I buy nothing? What other public uses could have been done here instead? Maybe expanded sidewalk for walking or micro mobility or hand washing stations or?”

PBOT says the program is no different than their sidewalk cafe permit and that business owners have the right to manage the space however they see fit, as long as it meets permit requirements for public access, pass-through traffic, and so on.

From what I’ve seen, most of the spaces use the curbside lane formerly occupied by parked cars. There are a few street-wide plazas, but those are the exception rather than the norm.

It’s great when several businesses link the spaces together, like this example on N Mississippi Ave: 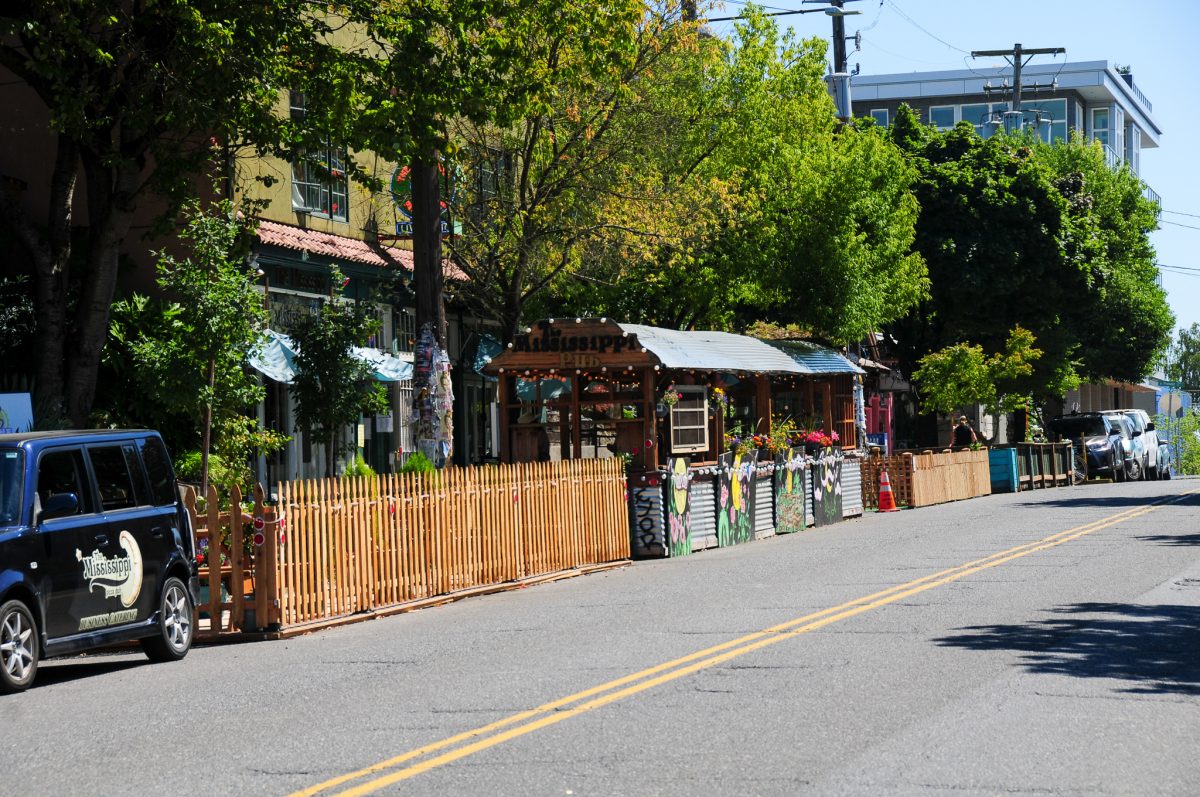 Another double on NW 13th at Hoyt: 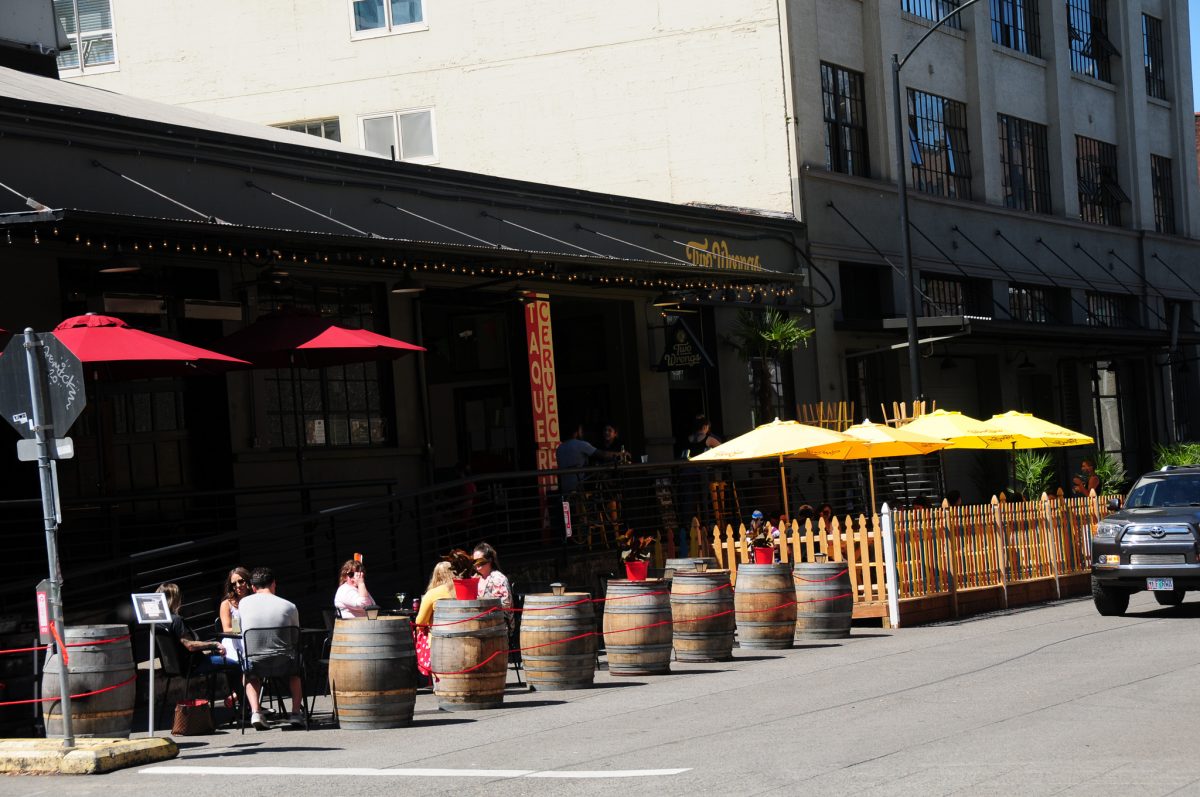 Many of us feel NW 13th should be a carfree promenade and this permit program has helped validate that vision: 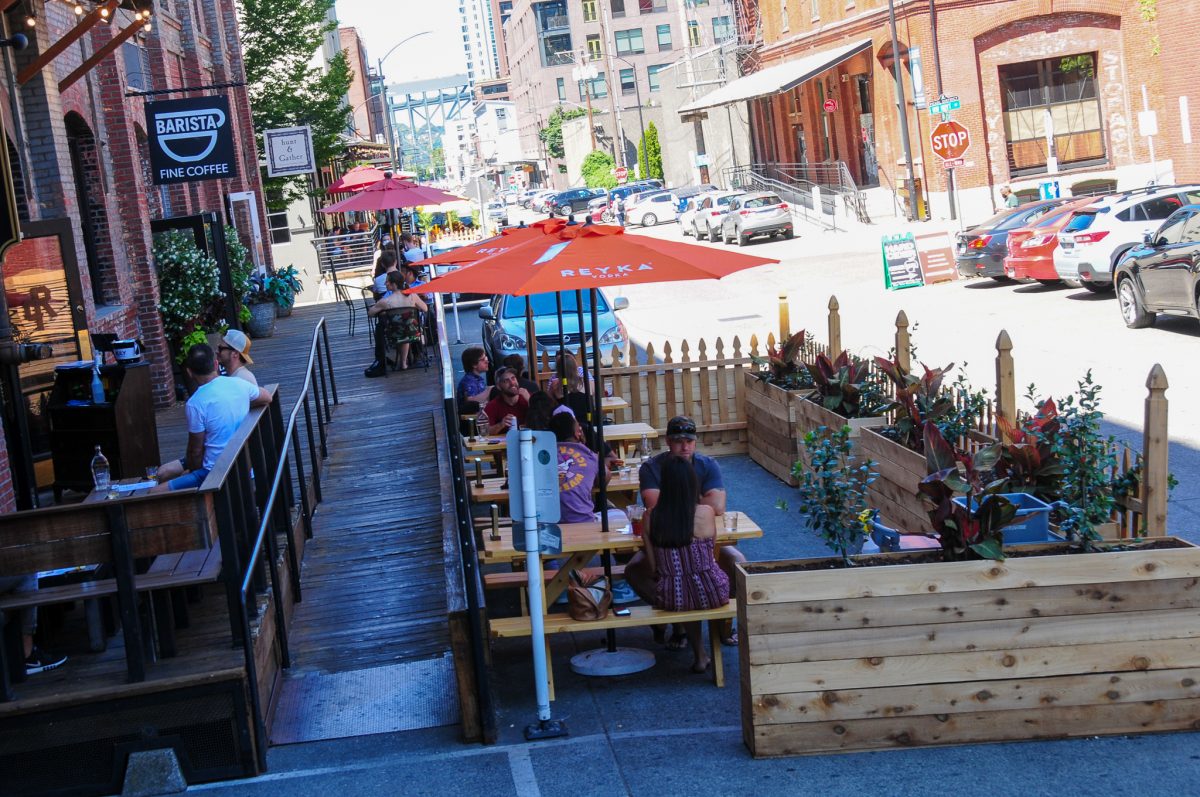 Rogue Brewing on NW Flanders has a simple but effective design, giving each party their own, physically-distanced deck: 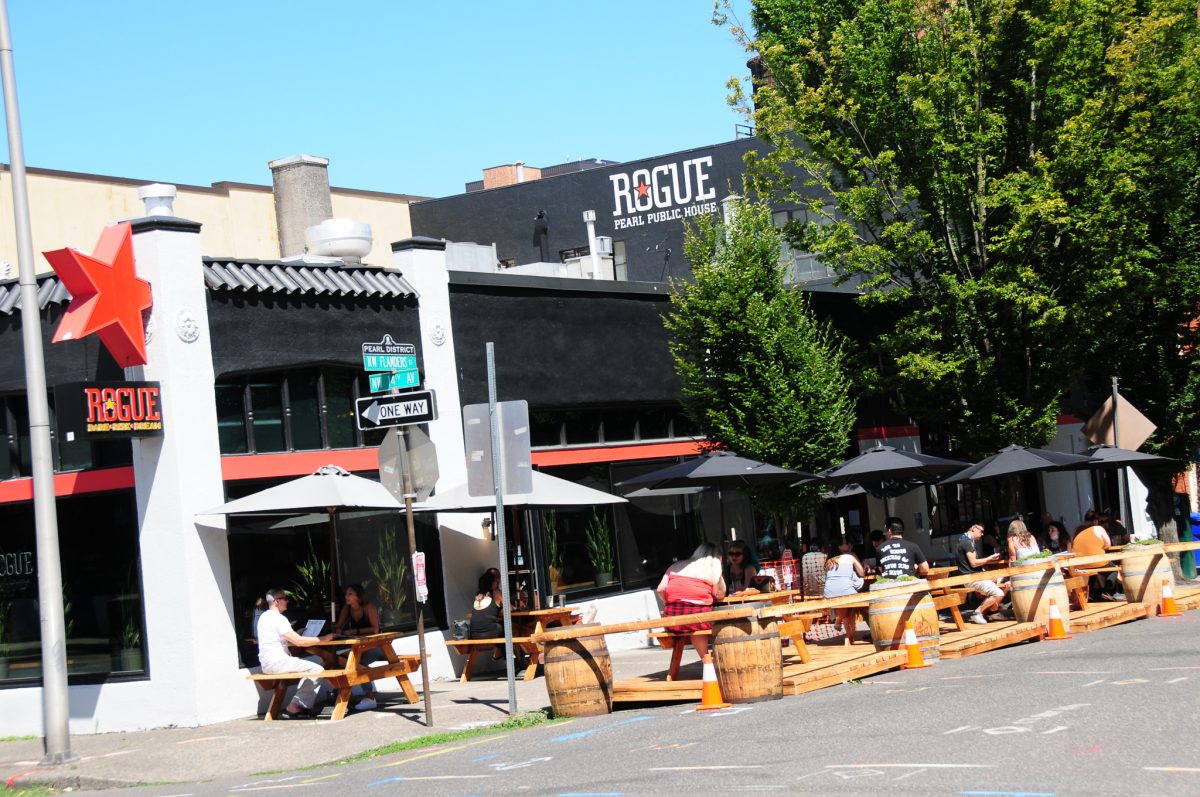 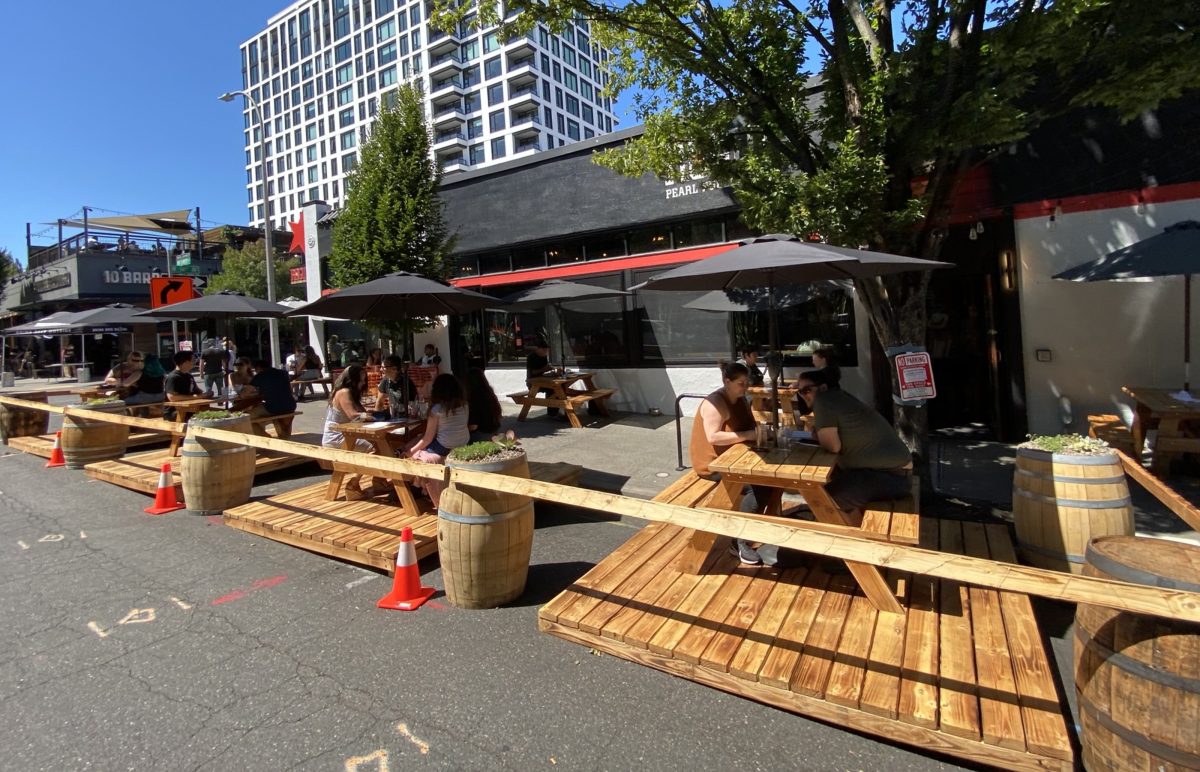 This one in front of Cafe Mingo isn’t that nice to look at but it gets the job done: 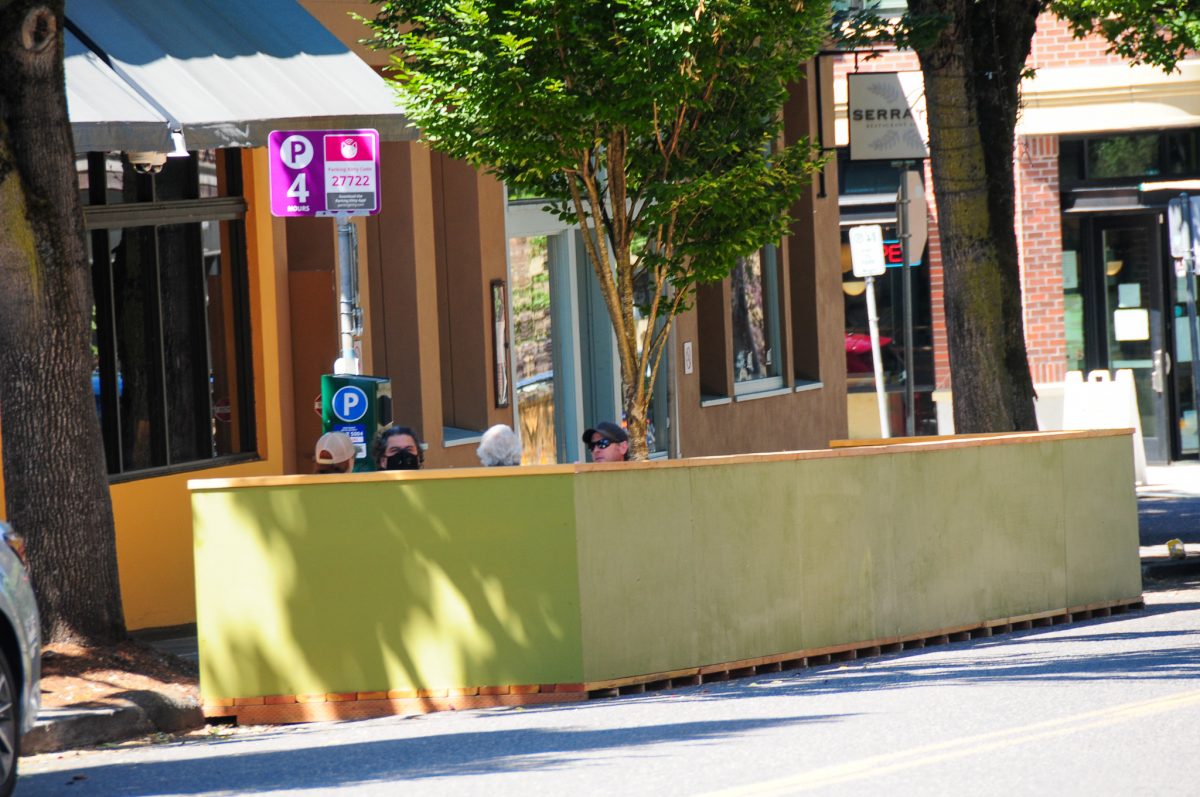 At NW Glisan and 21st there’s outdoor dining on both sides of the street!

The plaza on SW Harvey Milk between 12th and 13th is a sight to behold: 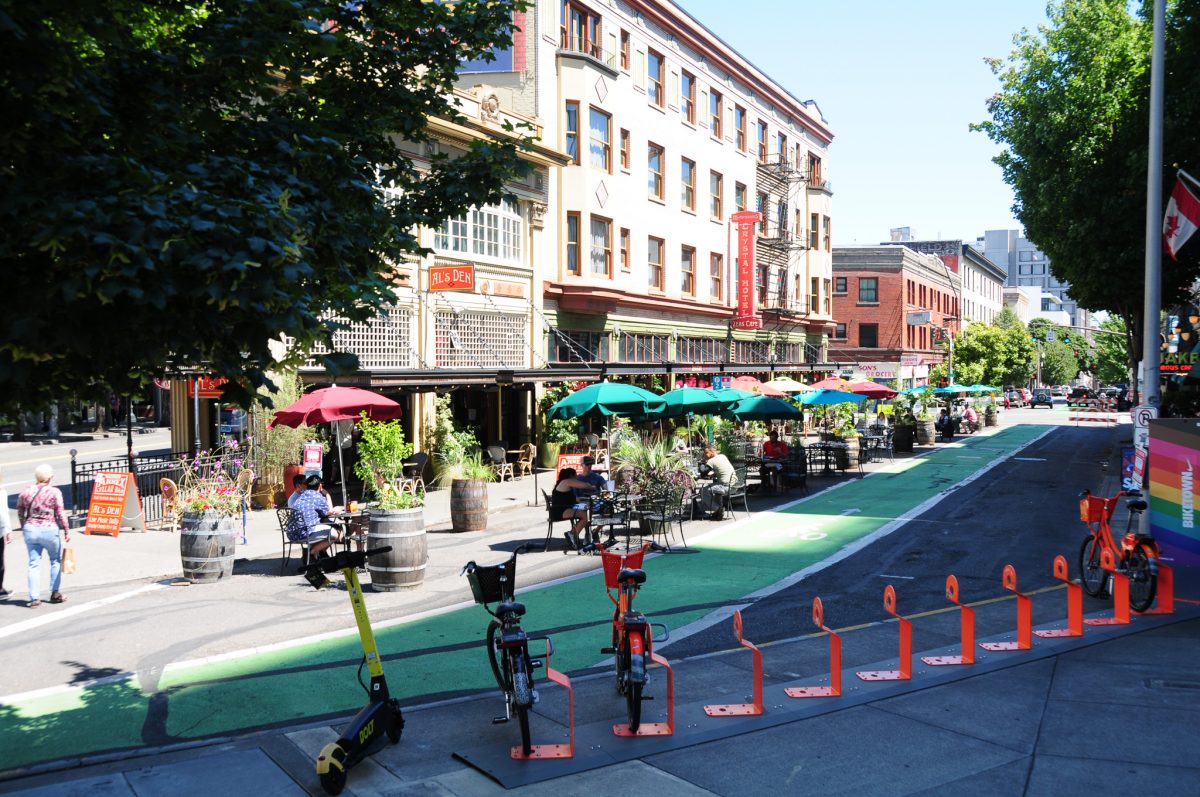 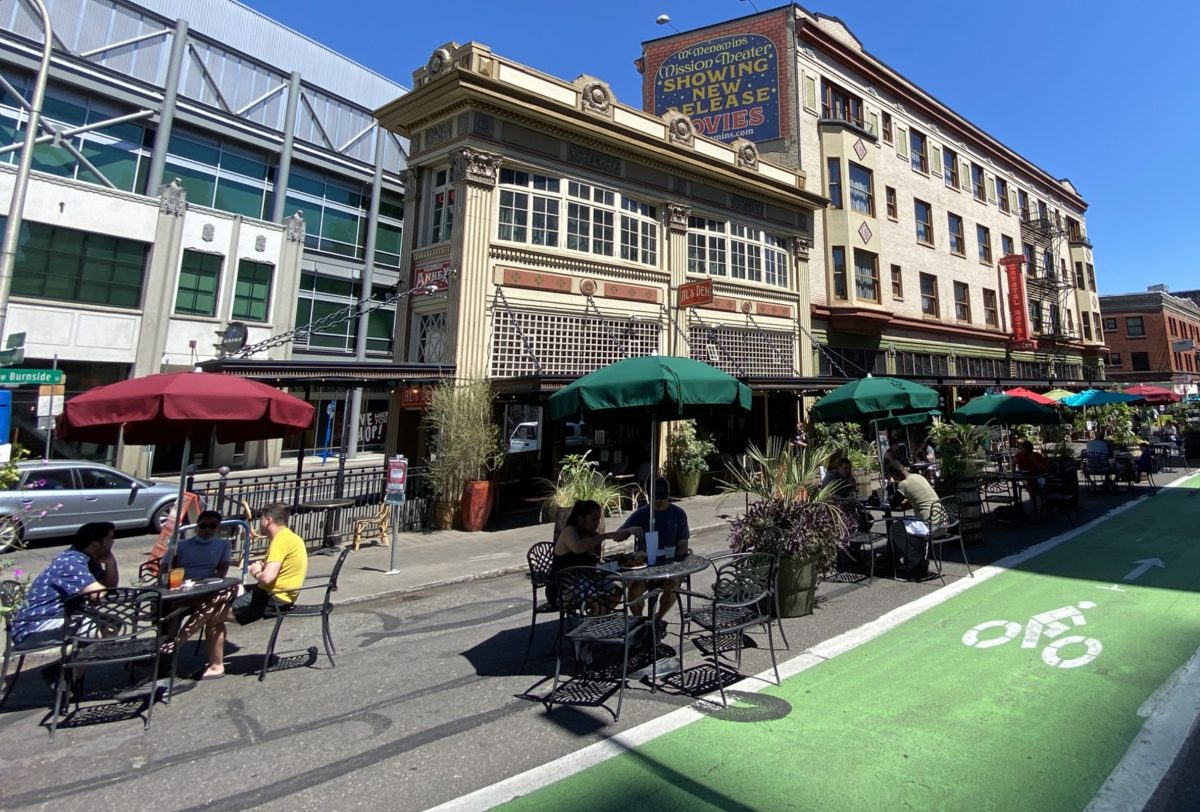 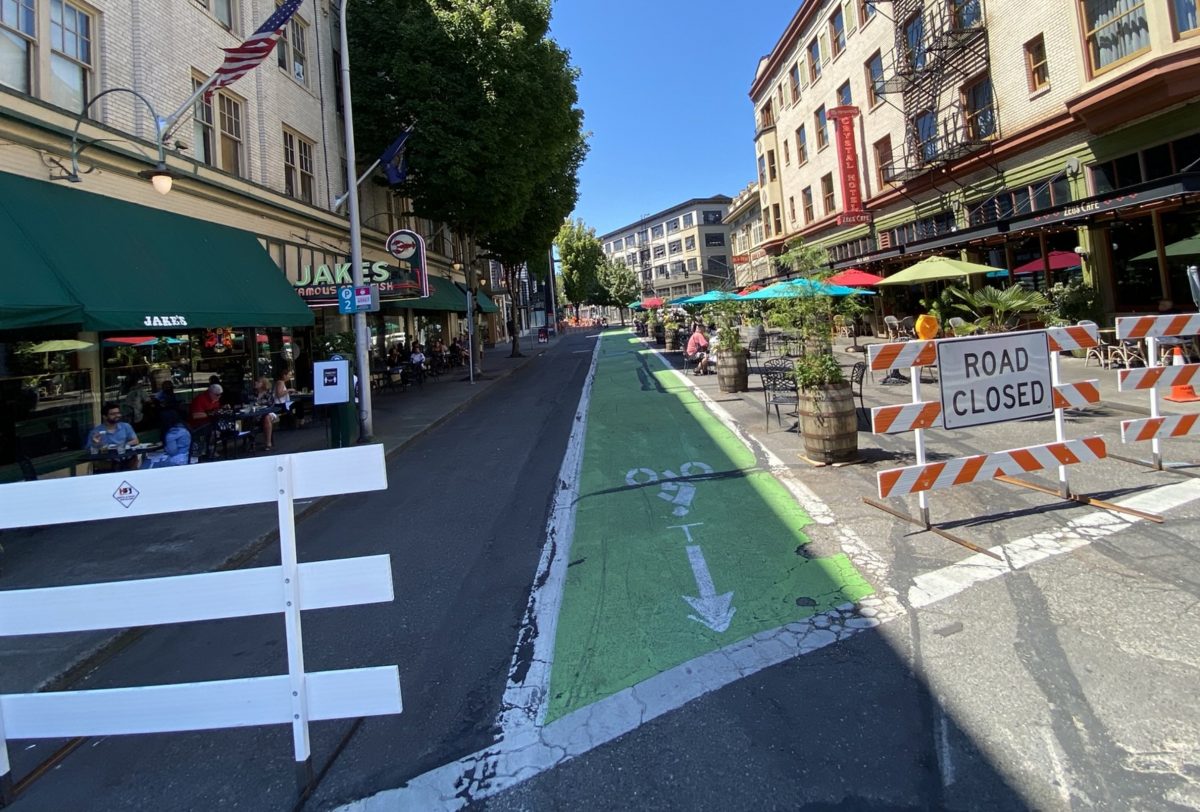 While these all look a bit different, they have something in common: They remind us that streets can have a much higher purpose than simply moving around and storing large, toxic, loud, dangerous private vehicles.

It will be sad to see them all torn down at the end of September. Hopefully we can find a way to keep them up and/or make this an annual program — Covid or no Covid.

(For more plaza goodness, don’t miss our previous coverage of the “Rainbow Road” plaza on SE Ankeny at 28th.)

Great work documenting these. It would be an interesting study in design, cost, use, etc to see how all of these hold up. I saw a street closed at 80th & Stark, but when I rode through the other day the barricades had been moved. They were still on the street at the curb, but I’m not sure if someone took them out of the road, or if the permit only allowed it for certain times? I’m sure some neighbors love/hate these things, and it’s hard to keep those road closed signs in the road forever.

I’m all for anything that takes back space from private cars, even if it’s associated with (and funded by) a nearby business. To me, these spaces look like a lot of formerly public land that was once taken over by private cars, and is now once again being used publicly. It would be an improvement if the city required a “public” space be funded & built per so many of these, with a handwash station, porta potty, mask dispenser, etc.

This reminds me of inviting European streets and sidewalk cafes. Love it!

Drinking in public places should be legalized everywhere if these public spaces are being used for private entities to sell and serve booze. We criminalize folks who purchase it themselves for drinking it outside. If we want people to stay outdoors to socialize, drinking outside should be legal!

Are there any conversations about how businesses and the city will approach this situation during the cold, rainy months?

The permits are currently set to expire at the end of September, so these are likely going to be removed at that time.

Unless of course PBOT extends the program. Then all it would take to keep these going through winter are some tents, heaters, and warm blankets.

Yes. Good point Chris I. Maybe we’ll figure out some sort of technology for heating that isn’t so bad for the environment. Or maybe not. I have no idea how people will survive socially if Covid is going strong this winter when it’s dark and cold and hard to be outside. Maybe folks will just bundle up in sleeping bags and gloves and hats!

Bicycle-powered personal space heaters. Sit at a table and pedal for heat.

Good to know that those relatively minor measures would be protective enough against the cold and rain. Like I mentioned before, I will be moving to Portland around end of October/beginning of November and have been thinking about how businesses will deal with having only indoor space in “covid times”.

I am definitely in favor of making European-style public plazas permanent. I hope PBOT will consider this.

Call me paranoid, but I would not trust my fellow hoomans not to be distracted by their phones while driving a 3 ton SUV and not crash into one of these plazas. Or drive into one on purpose (it has happened before). It’s also a huge liability for those businesses and the city that approved them (lawyer friends & insurance worldview). No thanks, I will not eat my burger in the middle of the street, 6 inches away from bumpers and exhaust pipes…

To be fair, some paint and all-too-delicate glass is all that separates you from those SUVs inside the building, too. As you bike or walk, you get the paint, not even the glass. (Maybe that’s better?) A distracted or malicious driver can easily injure anybody inside near the wall, and I’m sure you can find example footage of such crashes if you search. Point being, it’s not much different than before.

And most of these street seats are on streets with lower traffic speeds. Businesses with parking oriented directly towards the structure, and adjacent to high-speed roads are at much greater risk.
https://usa.streetsblog.org/2020/02/19/you-arent-even-safe-from-a-car-inside-a-building/

Maybe PBOT can have local artists & kids paint concrete jersey barriers and then install those at higher-risk spots? The corner shown @ NW Glisan & 21st seems like it could use some more protection.

If a Multnomah Co. DA grew some fortitude we wouldn’t need more concrete all over the place.

Better wall these off with concrete blockades before we have another NYC.

Vote Up2Vote Down  Reply
« What should PBOT do with old Biketown bikes?
Trump owes us $542,000 (and counting) for illegal courthouse wall »