At first glance, the just-finished mural in a prominent location in the Central Eastside evokes the carefree spirit of Portland’s fun cycling culture. But the artist who created it hopes viewers take away something deeper.

Portland-based illustrator Cloe Ashton (who you might recall created art for a BikePortland story last year) completed the project on Tuesday with support from Portland Street Art Alliance, a nonprofit that supports street artists.

The piece features six large figures cycling across a wall. While their outfits, bikes, and colorful aesthetic might make you smile, a closer look reveals a more serious intention. The riders are not smiling or showing any signs of joy. And their leader is a skeleton with “R.I.P.” on its head badge. (Update: Ashton says the skeleton rider also glows in the dark, so you might want to swing by at night!)

Asked to share a statement about the work, Ashton said she was inspired by the jarring juxtaposition of Portland summers marked by the fun group bike rides of Pedalpalooza and the onset of the Covid-19 pandemic that has ravaged our community in numerous ways and still prevents us from riding together:

“Activism can take many forms and can even be a celebration, but it is important to remember that the origins of those festivities are often dark events and that so many parties are actually memorials. Massive bike rides normally occur throughout the month of June in Portland during a festival called Pedalpalooza, but with the advent of covid we have an opportunity to take time to reflect on why we gather, what it means, and how we can make the streets safer. The ride leader is a skeleton on a ghost bike, to remind us that we’re working to make public spaces safer for everyone.”

The mural faces a parking lot on the northeast corner of Southeast Water Avenue and Hawthorne Boulevard. The bike lanes on Water Ave are relatively busy so the mural is sure to be seen by many people on bikes.

It’s important to note that Ashton submitted her proposal and statement for this mural before the murder of George Floyd in Minneapolis that has sparked ongoing protests. “But I think the sentiment still applies,” Ashton shared. “And I wish people willing to fill the streets to protest Big Oil at WNBR [World Naked Bike Ride] every year would do the same for the victims of police brutality.”

Ashton left further evidence of her motivations with a statement on the mural you can read in small letters under her signature on the lower right. It reads, “Fléctere si néqueo súperos Acheronta movebo.” That’s a quote by Virgil taken from The Aeneid that translates to, “If I cannot move heaven, I will raise hell.”

UPDATE: Ashton says the skeleton figure glows in the dark, so you might want to swing by at night too! 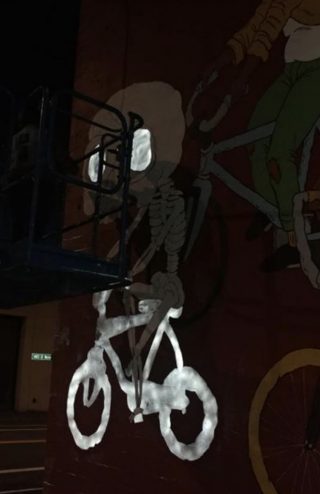 Clever, inclusive and thought provoking. I give it one week before it is vandalized by graffiti.

Talk about a “Ghost Bike”

I really appreciate the thought the artist put into her mural, and also the reporting of it here. I’m also glad you mentioned Portland Street Art Alliance.

For anyone who hasn’t walked or rode through the Central Eastside lately, the new murals there make it an incredible experience. If you spend a bit of time on Instagram or other social media, you can find all sorts of info about the murals and artists. Vehicle traffic is low on weekends. The rough, industrial old and the artistic new contrast, but also complement each other.