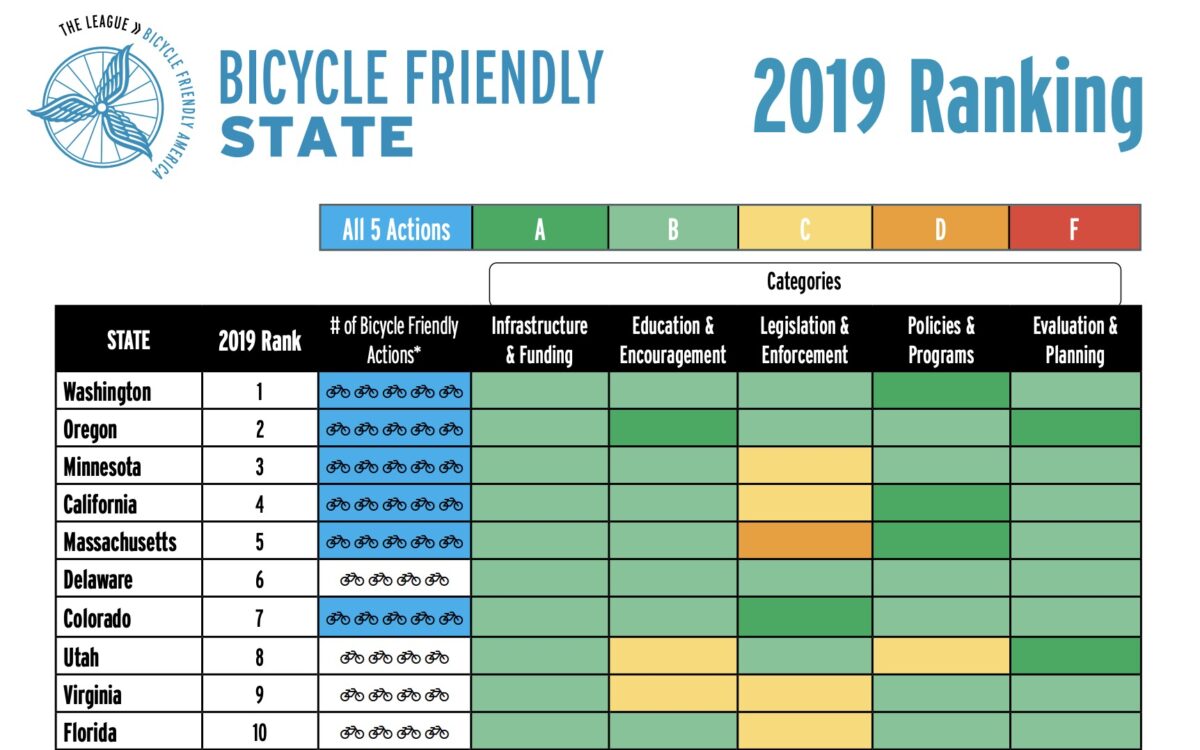 Oregon is in a breakaway in the race for America’s most cycling friendly state.

That’s according to the national nonprofit League of American Bicyclists who released their Bicycle Friendly State rankings last week.

Oregon’s second place is its highest ever finish since the League began their rankings in 2008. We’ve been as low as eighth in 2011 and finished fifth the last time rankings were released in 2017. With an overall score of 71.8, we narrowly lost to Washington who finished with 71.9 and once again took the top spot which they’ve held every year.

States were given grades and numerical scores in five categories that included: completion of bicycle friendly actions; infrastructure and funding; education and encouragement, legislation and enforcement, policies and programs, evaluations and enforcement. Oregon was one of eight states that completed all five of the “bicycle friendly actions” (which include a safe passing law, a complete streets project, an emphasis on bicycle safety, a statewide bike plan, and a minimum level of federal funds spent on biking) and received Bs and As in all categories.

Despite those stellar grades and a 2.4% bicycle commuting rate that’s the highest in the nation, the League’s Oregon Report Card offers several ways to boost our ranking. They say we should repeal our “mandatory sidepath law” which requires bicycle riders to use a path or bike lane when one is available. (There are exceptions built into the law and it’s rarely enforced, but ORS 814.420 still exists.) They also urge Governor Kate Brown to “consider how bicycle and pedestrian infrastructure can alleviate traffic demands caused by denser development”.

You might know the League as the organization that gave Portland our once-coveted, now-controversial “Platinum” ranking. The state rankings are the League’s effort to focus on state transportation departments who they say are, “crucial actors for the safety of people biking and walking.” According to League analysis, 22% of all U.S. roadways are state-owned, yet they are where 45% of all fatal cycling crashes occur.

“Governors can provide leadership to state agencies, promote tourism or economic development around bicycling, or champion legislation that addresses safety funding and other needs,” the League’s report reads, “Making roadways safer for people on bikes isn’t a platitude, it requires action.”

These rankings are far from perfect, but the League does an admirable job of collecting data and comparing states on apples-to-apples metrics. Learn more and view all 50 state report cards here.

Seems weird to ding Oregon for the sidepath rule but ignore Washington’s compulsory helmet law, or should I say *laws*: there’s nothing on the state books, but most of its population centers have one.

I bet the “sidepath” law is enforced more than the passing distance law, which almost no one knows about and even fewer understand.

Great point. That’s one of the many problems with such a high-level analysis. It’d be more interesting to look at the most populated MSAs (say top 50 to keep the scope similar). Then you could account for local and state policies.

Note: As a transportation planer, I have been scratching my head [for >15 years] as to how King County Board of Health was able to “impose” a law onto the travelling public (and state and local DOTs) requiring all bicyclists to wear a helmet in 1993 [King County Title 9]. On the other hand, this may be a good process as to implement roadway safety laws on motor vehicle operators to protect vulnerable roadway users?! [Have any Seattle planners/ lawyers looked into this?]
https://www.kingcounty.gov/depts/health/violence-injury-prevention/traffic-safety/~/media/depts/health/board-of-health/documents/code/BOH-Code-Title-9.ashx

This is technically correct in that the Washington State does not mandate all-ages helmet use, but leaves out the fact that just under HALF of the state’s population lives in a jurisdiction with an all-ages helmet law. Just to put this in perspective, Washington’s six largest cities all require helmets. The largest city without such a law is Everett. The next largest in Western Washington is Bellingham.

The Bicycle Helmet Safety Institute recognizes that Washington State is alone in the US for its unique preponderance of all-ages helmet laws. The only other state with more than a small handful of such municipal ordinances is Missouri, all of which are in St Louis County alone.

Luckily, Olympia’s BPAC has prepared a fairly succinct 3-page paper on the complicated and conflicted history and efficacy of mandatory helmet laws and encouragement campaigns:

I think Oregon’s enforcement score should be a “D.” A few examples: Motorists need merely claim “I didn’t see him” to get a pass. Traffic enforcement in Oregon’s largest city is almost non-existent. A bicyclist in Ashland was cited for and convicted of leaving the bike lane to avoid a hazard.

To be fair, that’s not at all unique to Oregon.

How bad must things be nationwide, or how out of touch is LAB’s scorecard, when all of the leading bicycle use cities in Oregon are seeing declines but LAB elevates it to number 2.

I think it’s time to rethink LAB’s entire Bicycle Friendly program. It was initially put in place to generate enthusiasm for action, but has become a bureaucratic checklist tool that ignores whether conditions on the ground are improving.

Obviously graded on a curve.

Does the curve have dangerous potholes and drainage grates, annoying speed bumps and six different kinds of ‘experimental’ infrastructure installed?