“The changes respect the lives of children and adults.”
— Shawn Garnett, principal of Markham School

We get the feeling around here that public opinion around street design is shifting in Portland. A statement from a local school principal released by the City of Portland this week validates that feeling.

The rate at which the City of Portland is redistributing street space throughout the city (and the confidence they’re doing it with) seems to have normalized what used to be a controversial thing. From the bus lane on SW Madison to the changes in Gateway and East Glisan, our transportation bureau is slowly but surely reducing driving space in order to make streets work better for everyone. 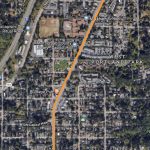 The latest location of major road striping changes is in the West Portland Park neighborhood. With a $275,000 budget, PBOT has made changes to a one-mile stretch of SW Capitol Hwy between I-5 and Portland Community College Sylvania. The aim of the project is to tame drivers on Capitol Hwy so that it’s easier to cross and reach transit stops. Other goals are to reduce speeds and crashes and improve the existing bike lanes. To do this, PBOT has reduced the number of driving lanes from four to three (including a center turn lane), has created wider bike lanes protected by a painted buffer and plastic bollards, reduced the speed limit from 35 to 30 mph, and plans to install median islands and extensions, adjust signal timing, and add a new marked crosswalk.

This week the agency released a statement from Shawn Garnett, the principal of Markham Elementary School (which is located directly adjacent to the newly restriped lanes). Here’s what she said:

“I had some reservations at first thinking it could end up being a traffic jam nightmare in the mornings and afternoons with all the school buses, pedestrians and cars.

The changes made in front of Markham are the best ever for students and everyone else’s safety. This has been a long time coming, but it has finally come. The changes respect the lives of children and adults. The reduction to two lanes on Capitol Hwy in just that small stretch emphasizes the importance of people’s safety, especially in front of a school. This makes it so much easier for our safety patrol students to do their jobs and helping me to breathe easier.

I could not be happier with the new configuration.

What I’ve also noticed is that PBOT is pushing through on these projects, without allowing them to be derailed by opposing voices. I asked PBOT Spokesperson Hannah Schafer about opposition to the road diet on East Glisan and I appreciated her matter-of-fact response. “Some people are struggling with the change,” she said. “But we are committed. We have a responsibility for safety in our city. That’s our job as the transportation bureau, to make sure our streets are safe. So we’re going to do that to the best of our ability.”

— Jonathan Maus: (503) 706-8804, @jonathan_maus on Twitter or jonathan@bikeportland.org.
— Get our headlines delivered to your inbox.
— Please support this independent community media outlet with a one-time contribution or monthly subscription. 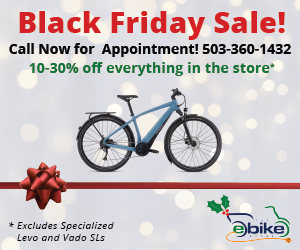 Used to live right there.

Could have used this long ago.

I find the perception that a 15% drop in speed limit would result in a huge increase in congestion fascinating. Especially when that limit is not necessarily related to the actual speed people are traveling.

This stretch is on my commute home and it’s fantastic!

I find it bizarre that the road was ever 4 lanes, since it’s a 2 lane on Kerr Pkwy and a 2 lane on Capitol hwy north of I-5, so why bother to balloon out to 4 lanes, through a neighborhood?

Capitol Hwy, Glisan, and 102nd seem more like they’ve been “right-sized”. Outside of a very limited window of time, two travel lanes in each direction was way too much capacity to move car traffic effectively. Building road capacity to serve rush hour seems a bit wasteful IMO.

Glad that PBOT has in fact shown some backbone by completing these projects regardless of neighborhood and driver pushback…. there still needs to be more enforcement…

Thanks, Jonathan, for writing this story. What a huge improvement! The drivers who used to race to get around slow-poke drivers (ones obeying the speed limit) now have to obey the speed limit, and it all feels much safer – though I’ve heard a few reports of drivers using the center turn-lane as a passing lane. More enforcement is still needed, though the stats showed that around 60% of drivers exceeded the speed limit in the old four-lane configuration. I’ll bet it’s maybe 25% now.

What I don’t get is why they make the biking portion artificially small. You already blocked off the road, why not make it available, the whole thing, to bikes?

Vote Up0Vote Down  Reply
« Should we build it? Decision time nears for Oak Grove – Lake Oswego bridge project
City task force will explore how to make drivers pay true cost of road use »