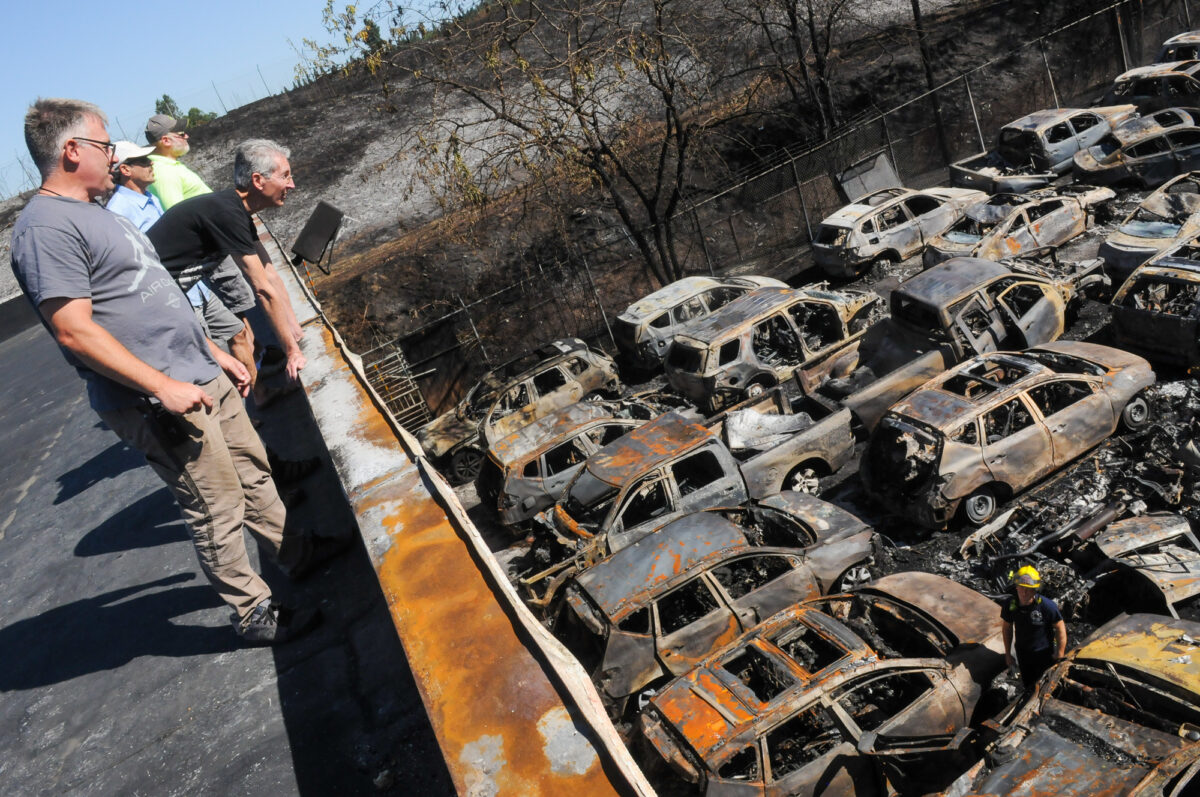 Lumberyard co-owner Will Heiberg and employee Chris Rotvik are on the roof of their building. This is how close they were to disaster.
(Photos: J. Maus/BikePortland)

“We’re incredibly lucky,” Lumberyard co-owner Will Heiberg said this morning from the roof of his building on Northeast 82nd just south of Siskiyou. “If you would have talked to me last night at about 6:30 I would have said it was all gone.”

“If you would have talked to me last night at about 6:30 I would have said it was all gone.”
— Will Heiberg, Lumberyard co-owner

Heiberg and his business partner Michael Whitesel opened the Lumberyard in 2012 and are just putting the wraps on their best summer season ever.

On Monday evening they were working the front counter when a man rushed in and said, “There’s a fire on the hill!” The way Heiberg tells it, their manager went up on the roof to check it out. Heiberg told everyone inside to be prepared. “I said there’s a fire out back but it probably won’t be a big deal.”

A few minutes later Heiberg grabbed a fire extinguisher and climbed up to the roof to see for himself. “Then Mike [the manager] came running toward me and was like, ‘Get the f*** out now!'”

What seems to have started as a small fire in a vacant grassy field north of their building, quickly escalated into a major fire. Today I saw the remains of several destroyed homes and structures and dozens of cars in a lot adjacent to the Lumberyard. (Note: The source of the fire remains unknown. The cars in the parking lot are believed to be part of an auction and were not in active use.) 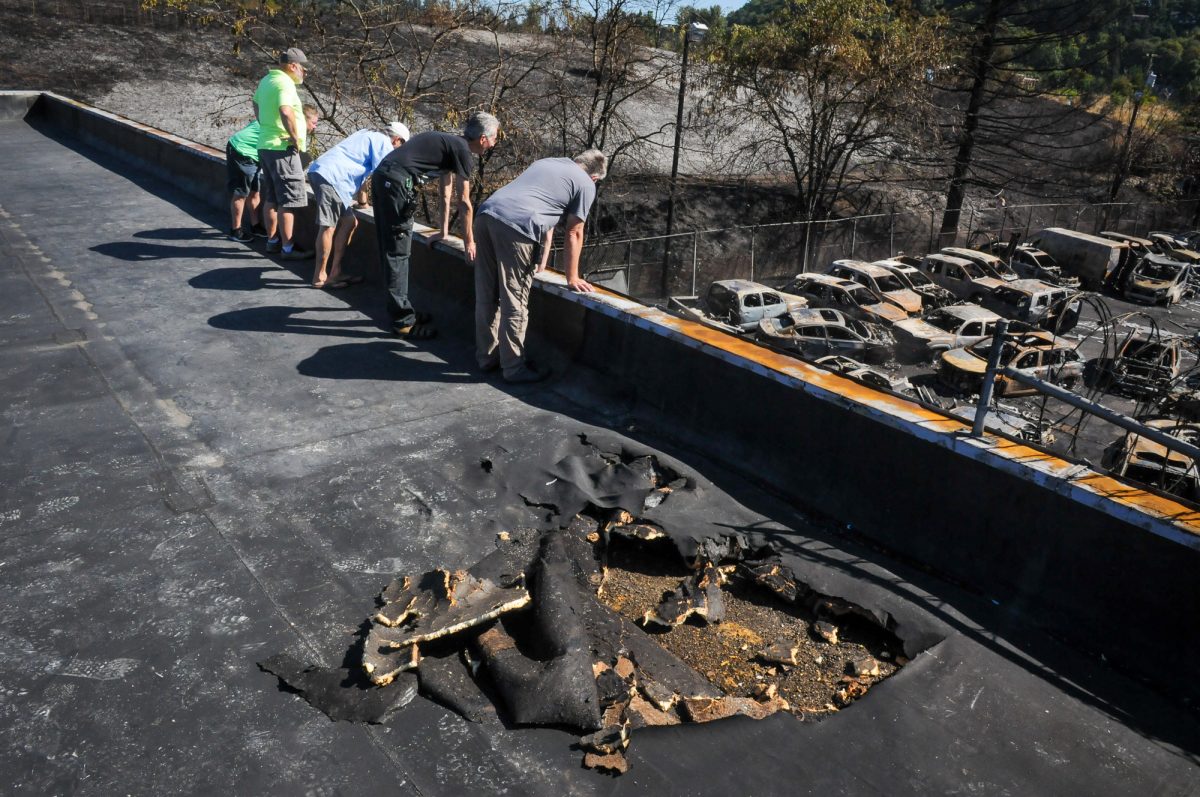 Flames reached their roof and there is minor exterior damage. 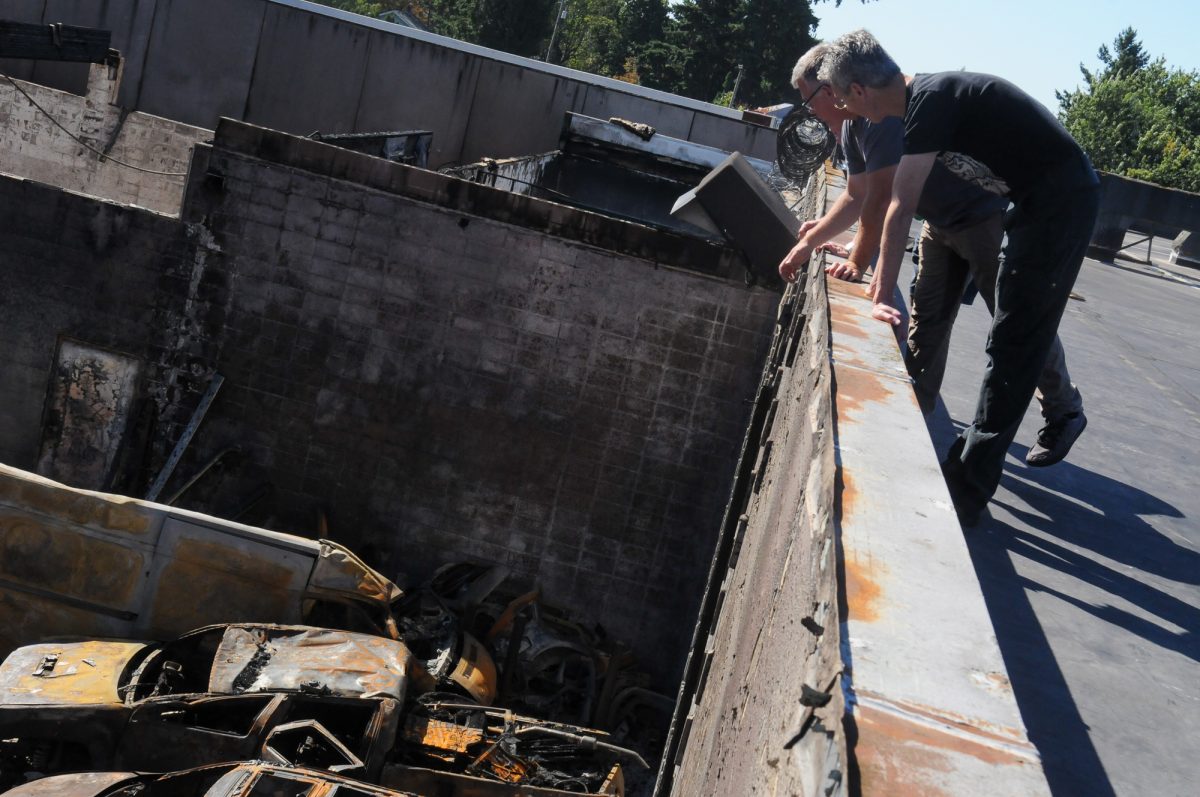 I’ve biked on the other side of this wall. 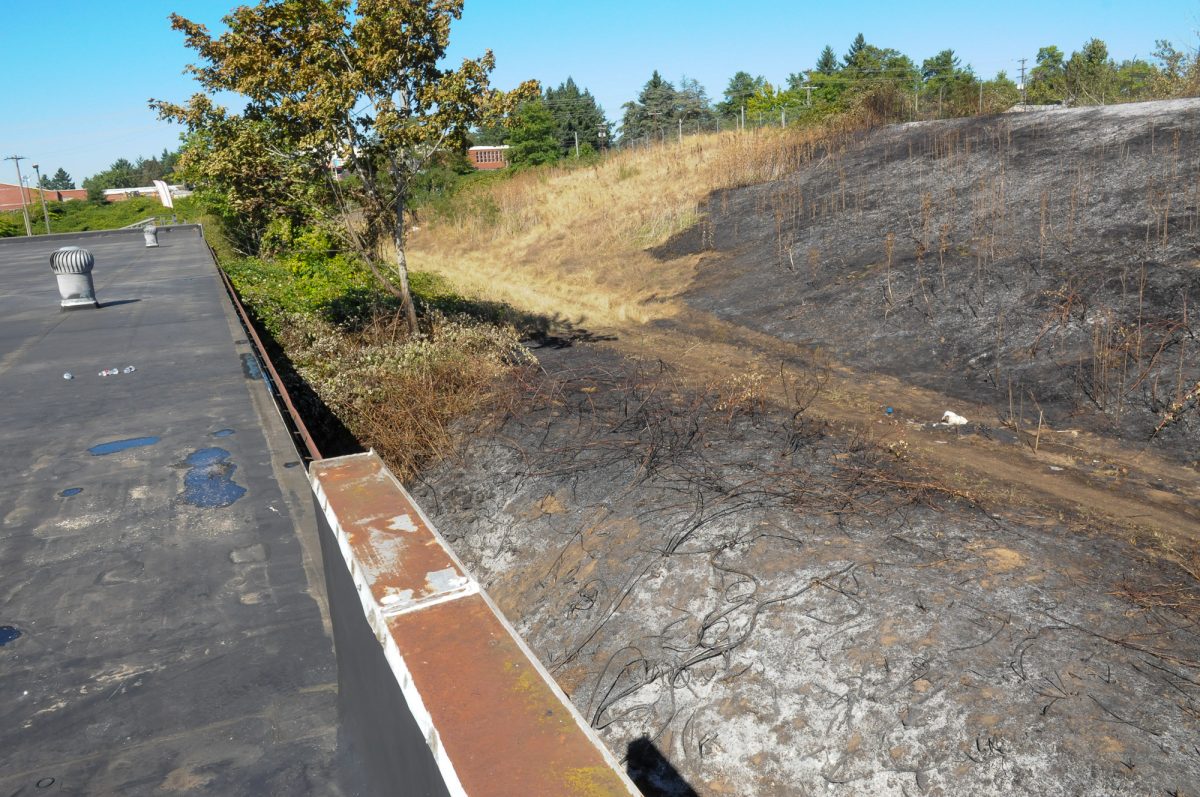 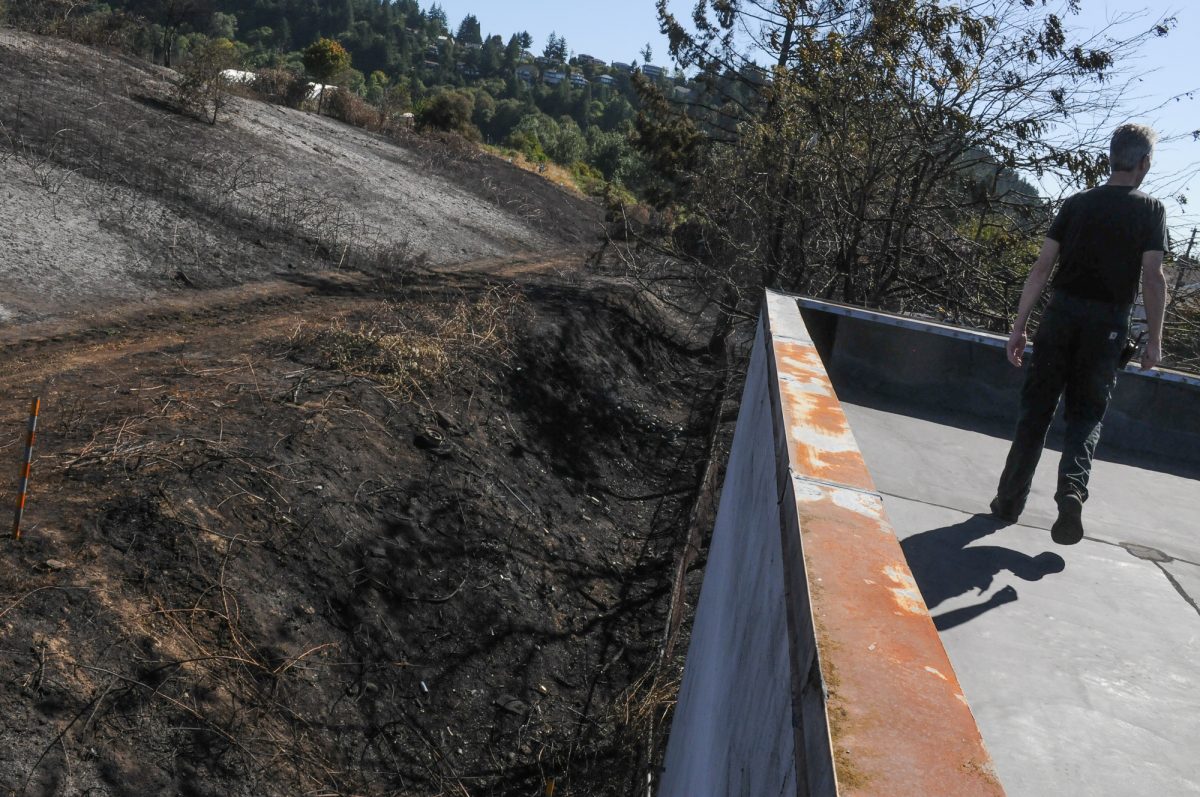 View of the lot behind the Lumberyard. 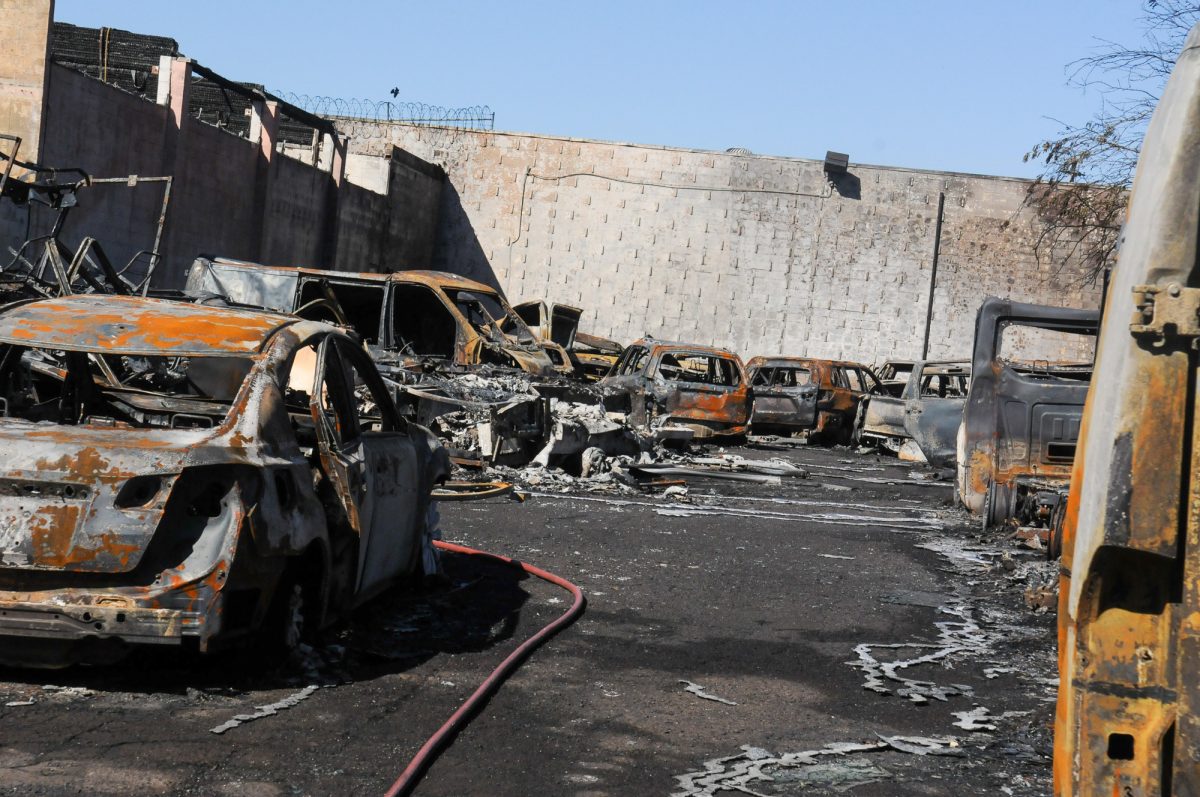 Looking west toward 82nd Avenue. That wall in the background is the Lumberyard. That’s the roof we’re standing on in the photos above. 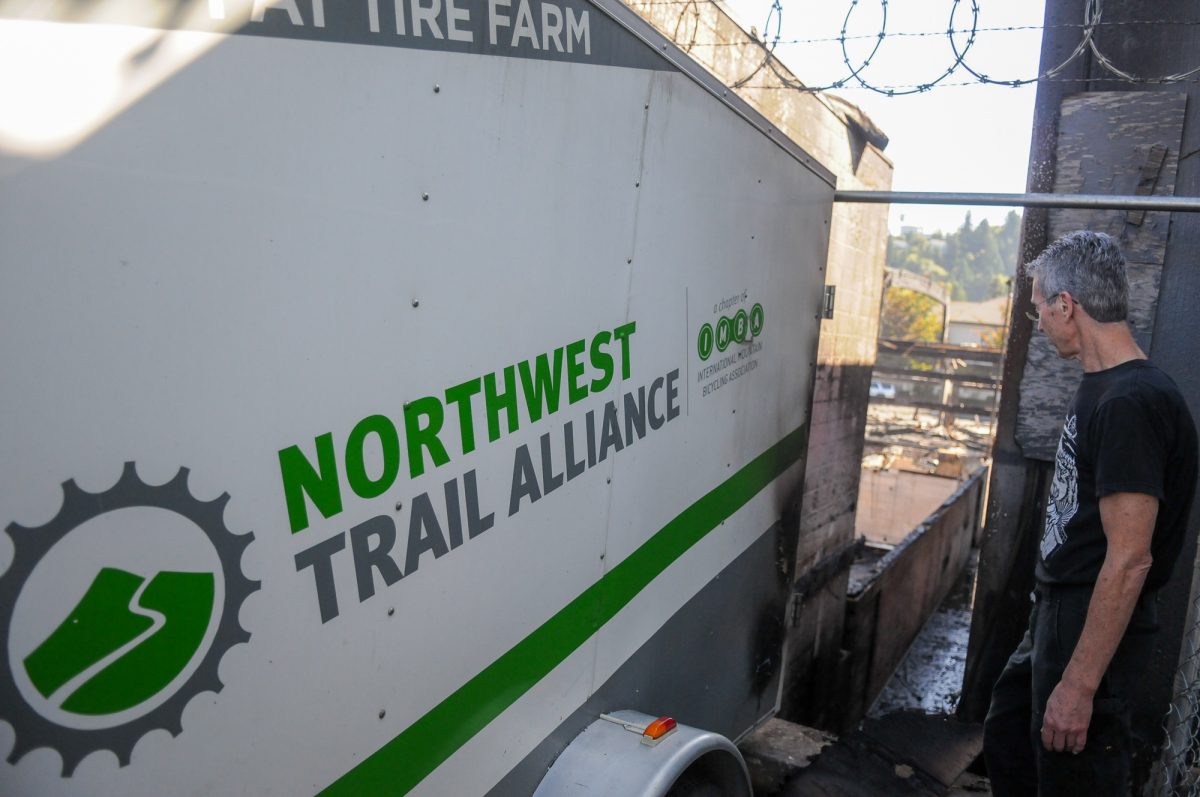 A cargo trailer parked outside sustained damage from flames. 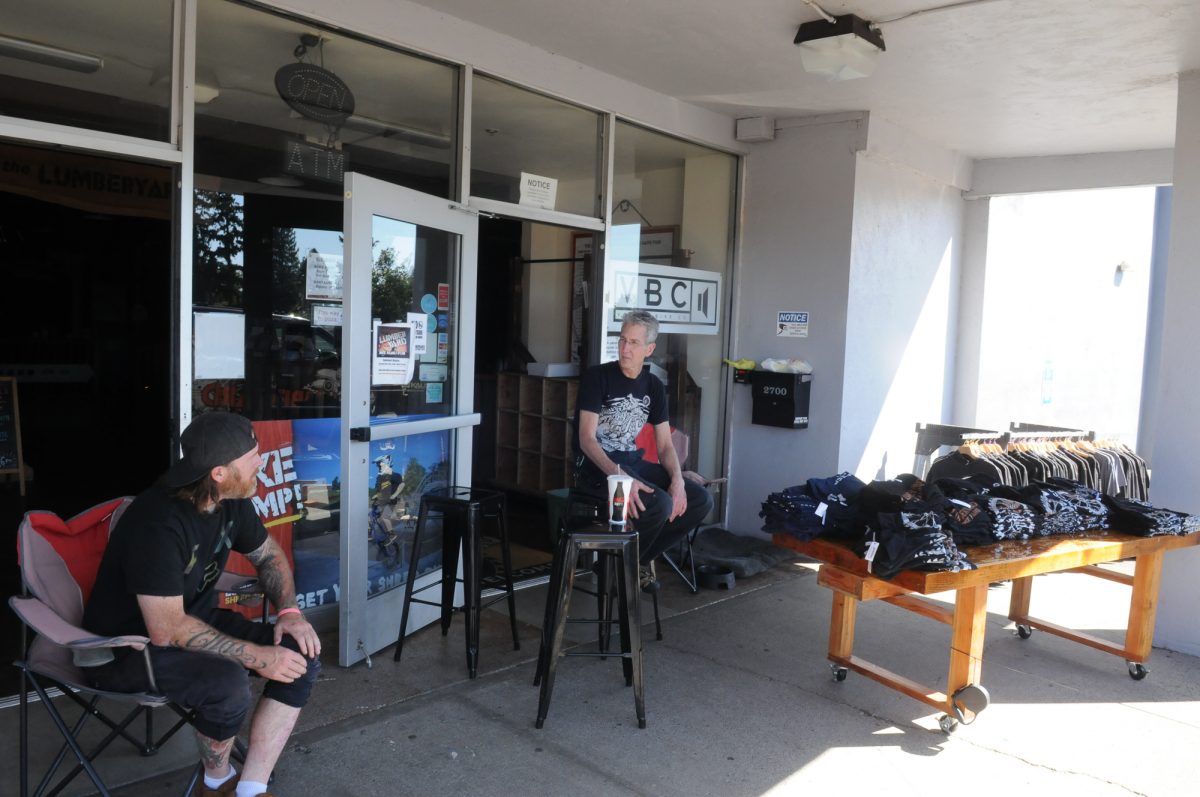 Without power inside, they’ve moved the retail shop outside for today.

It’s a miracle that the Lumberyard didn’t sustain more damage. The back and side wall of his building are charred from flames and smoke. On the other side of a cinder block wall just inches from where I’ve biked with my eight-year-old there are cars flattened and melted from the fire.

Heiberg credits the quick and decisive actions of fire fighters for saving his business.

They didn’t escape scot-free. There’s water damage in their basement. A cargo trailer parked outside is heavily damaged. Their roof has minor exterior damage from a few flames that managed to jump across. Paint flecks that peeled off due to heat on the ceiling litter the floor in a few spots. They’re still without power and a full building inspection hasn’t been completed, so they can’t make a final assessment of the damage.

That being said, all signs point to a relatively quick and full recovery for this bike community institution that we all know and love. They lost a week of summer camp revenue (this was supposed to be the final week); but Heiberg says he hopes to re-open by this weekend.

Since last night, an outpouring of support has come in. Heiberg and Whitesel say they appreciate that but they want to re-direct it toward their neighbors. “They lost their homes and they have nothing. It’s only because 150 firefighters that I still have my business.”

Stay tuned for details on a possible fundraiser and/or gathering in the coming days.

At least one home has been lost, one possibly still had an attic fire this morning. The neighborhood group Rocky Butte Farmer’s Market has started a fundraiser through Central Northeast Neighbors for displaced families. https://www.facebook.com/RockyButteFM/posts/468393987346628?hc_location=ufi

Are those regular cars that burned up or is that a wrecking yard?

some sort of auction lot. not a regular parking lot for customers or anything.

I was following the story last night on Oregonlive and its a testament to Will’s character that he complimented the fire fighters and expressed his concern for his neighbors rather than express worry about his own business.
It’s hard to find a bright spot in this situation, but if there is one, I think this shows the support for this institution in our community. My son almost cried this morning when I told him the yard might be gone. He’ll have something to smile about when I give him an update this afternoon.

That “auction lot” does not show up on Google as a identified business listing (the lot was car free in last satellite aerial)…again – remembering back to the large tire fires and junked car conflagrations – it would be a good code provision to have a set back of car / car parts from zero lot line neighbours.

And if I remember right – did not the City (or Metro) purchase the old golf course next door where the fire may have started? Perhaps the owner needs to do some field mowing etc.

Any chance for a background story on the lot, 2800 NE 82nd Ave, north of the Lumberyard? The land is zoned EG2h and despite having a frequent-service bus line that connects to the 82nd Ave MAX Station it sits relatively empty full of overgrown brush. With annual property taxes at $25,343.00, it makes you wonder why someone is paying over $100,000 every four years for the privilege to store cars that aren’t being used.

Correction: The lot with the cars is east of the Lumberyard. Nonetheless, what is the story behind 2800 NE 82nd Ave?

matchupancakes
Any chance for a background story on the lot, 2800 NE 82nd Ave, north of the Lumberyard? The land is zoned EG2h and despite having a frequent-service bus line that connects to the 82nd Ave MAX Station it sits relatively empty full of overgrown brush. With annual property taxes at $25,343.00, it makes you wonder why someone is paying over $100,000 every four years for the privilege to store cars that aren’t being used.Recommended 0

If I’m not mistaken earlier in the decade that exact burn area was almost a Walmart. I believe stiff neighbor protests sunk it tho

Sanji, you are are correct. A Walmart store was planned for this location and was halted due to strong neighborhood opposition. Due to ground contamination issues, this parcel is one of the toughest ones in Portland to redevelop. This site was formerly a rock quarry and was then filled in through years of use as a garbage dump. Any new building at this location would require an elaborate air collection and monitoring system to ensure that flammable gas does not build-up and pose a safety issue. The building would also need to be built on piles to prevent ground settling. Even in this economic boom time, the real estate market in this neighborhood just isn’t strong enough to support a development of this scale.

A GoFundMe page has been set up to aid those affected by the fire:
gofundme.com/ForMadisonSouth