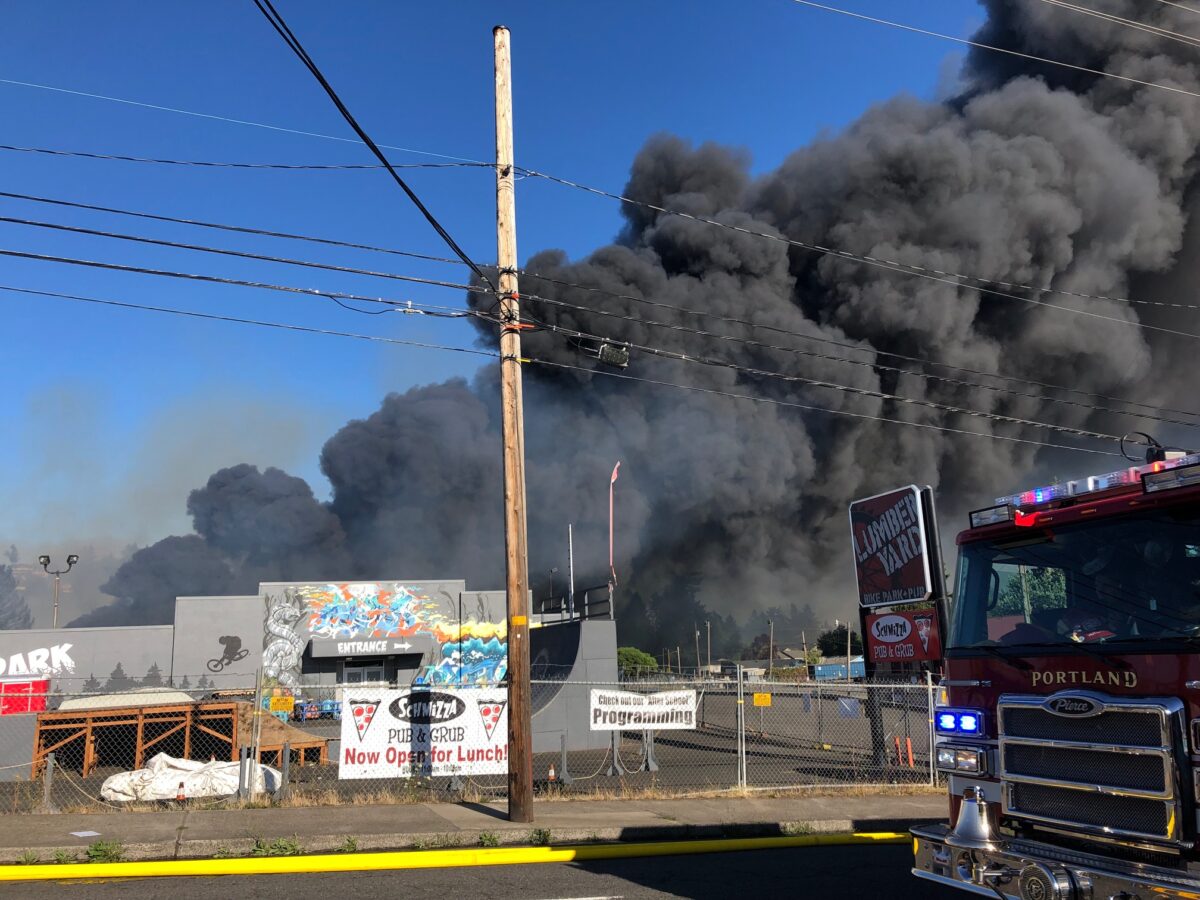 Smoke billows from the eastern part of The Lumberyard in this photo taken from NE 82nd Avenue.
(Photo: Michael Whitesel/The Lumberyard)

**READ THIS UPDATE WITH NEW PHOTOS FROM THE SCENE**

A large brush fire that became a major fire at about 6:30 pm this evening has caused damage to the Lumberyard Bike Park. 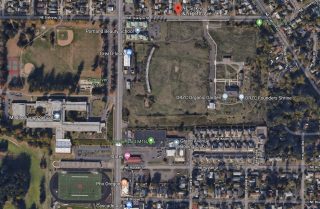 The fire appears to have started in the large grass field in the center of this image.

According to news reports, the fire started in a large field just south of NE Siskiyou near 84th. The Lumberyard is adjacent to that field. It was open when the fire broke out.

Live aerial footage from local news stations appears to show that the eastern portion of The Lumberyard’s building was damaged by the flames. According to messages posted by Lumberyard staff on their Facebook page, all employees and customers were evacuated safely.

Co-owner Michael Whitesel shared with us via email that they’re waiting news about the extent of the damage. Employee Chris Rotvik shared via Facebook that, “At the moment it appears the ‘Yard was spared major damage. Join us in sending prayers of compassion and love into the surrounding neighborhood, where others were not so fortunate.”

Here’s the official statement posted to the Lumberyard’s Facebook page:

Our hearts go out in support to all those experiencing loss as a result of tonight’s fire. We have immense gratitude for Portland’s fire, police, and emergency services; without their skill and courage, the toll would certainly have been worse. We will not know the full extent of the damage for some number of days and will provide updates as possible.

We’ll update this post when we hear more. Keep your fingers crossed and please think good thoughts for this cherished local business!

In my 18 years of living in Portland, I was always surprised that such fires were so rare as they are, given the local 2-season climate with no rain during the summer and all the grass turning brown if not watered. Given so much dry combustionable material, I wonder what the trigger cause was? Fireworks? A camp fire? Lightening? Spontaneous combustion?

Glad to know the Lumberyard bike space is still intact and operating.

Well, we can look at the photos and pretty quickly rule out lightning.

This fire was incredibly scary. I rode by on Tillamook around 5:30 as it was starting. At that point, the column of smoke was about 50ft wide, and was blotting out the sun for the neighborhood just south of that field.

I’m hoping this incident drives development on this lot. The city really needs to partner with someone to build affordable housing out here. The open field has always been a scar on the neighborhood, and attracts a lot of crime.

That lot is actually an old landfill, used up into the 1980s. I’m not sure any housing could go on top of that.

It can be done. It could also be a site for solar.

I maintained a soil vapor extraction system at a major retailer built on an old landfill in the area for several years. Based on that experience, I can assure you housing would not be built on such a site. The article you link is about commercial development, not housing development.

Live 5 blocks away and glad the Lumberyard is hopefully spared (although some folks out work temporarily at best….) along with the shrine which is such a great neighbor with what they did with that area. The field that caught fire actually covers and old city dump that we used to go to in the 70’s that was repurposed as a driving range after closing and glad there were no residual gases that could’ve made the situation even worse.

Have posted a new story with photos from the scene after a visit to the site and chat with owners this morning https://bikeportland.org/2019/08/27/inches-from-disaster-the-lumberyard-avoided-major-damage-from-last-nights-fire-303984

Fire was intentionally set and the “campers” responsible will never be found. Typical.