Today Westfir is as quiet as it was 100 years ago. The loudest thing is the roar of water over rocks in the nearby river. But it wasn’t always such a sleepy place.


Around 300 people call Westfir home today — far less than half the number employed by the Hines Lumber Company at its peak in the 1950s.

I recently spent a few days in Westfir and learned about its history and future through the eyes of a young business owner who wants to make it a destination for cycling and other outdoor pursuits. Often lost in the shadow cast by the legendary mountain biking reputation of its larger sister-city Oakridge, Westfir has a charm all its own. And now, thanks in large part to new owners of the Westfir Lodge and Mountain Market, the former sawmill town offers an excellent base camp to explore the quintessential Oregon landscape right outside its doors.

The place known today as Westfir has sustained human life for hundreds of years. Rich with clean water, healthy soil and vibrant forest life, its valleys and riverbanks were home to native tribes long before white people settled in the early 20th century.

In her wonderful book of poetry and narrative non-fiction, Window to Westfir (2006, Many Names Press), former resident Margarite Tuchardt writes: “There were deer and the soft rustle of bird wing in maple leaves. The valley gave shelter to Indians as they sat chiseling black arrow heads… Steelhead and salmon made their way up the swift currents and over rapids. The forest was carpeted with shite trilliums and sour grass… The is what greeted the first settlers of this magical valley.”

The town of Westfir didn’t exist until the 1920s when it was built as a home for sawmill employees. It took about twenty years for the lumber economy to finally get rolling. In 1945 Edward Hines bought the mill for $2,000,000 and Westfir hit its stride. Ms. Tuchardt was seven at that time. She lived in a small house along the North Fork of Middle Fork of the Willamette River. In her book, she recalls a “boom time” for the idyllic town with a butcher shop, dance hall, high school, post office, market, and doctor’s office where a benevolent man known as Dr. Varney would do everything from remove tonsils to deliver babies. 750 people lived in Westfir at its peak.

(Old photos of sawmill hanging on the wall of Westfir City Hall.)

Westfir was a classic Oregon timber town: Built with trees, with money made from trees, for people who worked with trees. But when the tree-conomy went away, most of the town did too. During my visit I walked on the old mill site (below). After learning about how immense and busy it once was, it was surreal to see nothing but a few paved roads and footprints of buildings where hundreds of men and women worked and massive industrial machinery once whirred and clanked all hours of the day. 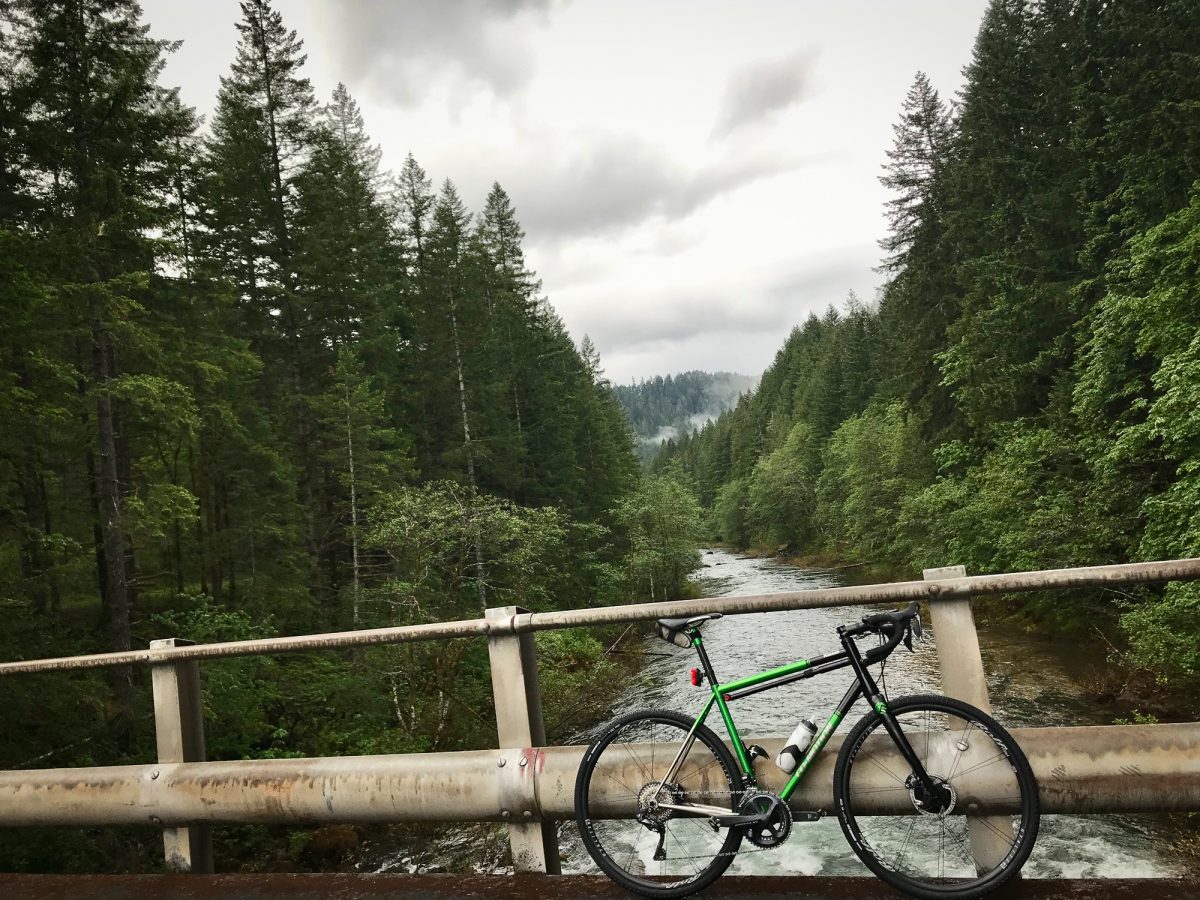 While the sawmill is gone, trees are still the center of Westfir’s economy. Today people don’t cut and process logs; they ride around and over them and they stare at them as they drive, drift, and pedal by.

The Westfir Lodge where I stayed for a few nights last month while I took part in the Sasquatch Duro gravel race, is the same building that housed the office and headquarters of Hines Lumber Company. Westfir is no stranger to cycling enthusiasts. It sits at the base of one of Oregon’s best singletrack runs: the Alpine Trail.

Trails are what brought Noah and Tracey Sunflower to Westfir. The Pennsylvania natives and former residents of Anchorage, Alaska bought the lodge last summer and have worked all winter on renovations. They plan to turn it into a destination for outdoor adventure. Just last week Tracey became an official guide with permits to lead hiking, snowshoeing and mountain biking trips in the Willamette National Forest. She’s the first and only guide in the area to have such privileges.

A 29-year-old Pennsylvanian running a lodge in rural Oregon might seem like a stretch; but the more I learned about Tracey and the longer I stayed at her lodge, it all seemed completely natural. Tracey and Noah have been river kayaking guides for many years. Before living in Alaska they spent summers leading river trips in Chile. Years later they settled down and got 9-5 jobs. Noah, 34, worked for a non-profit and Tracey worked at a major hotel where she learned the ropes of the hospitality business.

(Breakfast of organic eggs from nearby hens and sourdough baked in the lodge’s kitchen. Scenes from inside the lodge.)

When they were ready to venture out, Tracey and Noah scoured real estate listings throughout the pacific northwest. Tracey said they’d never even heard of the Oakridge area before a visit last May. “We looked at many other spots; but we kept coming back to this one. It has everything… And all these resources are much closer than they were in Alaska.”

Tracey wants to make Westfir a destination for all types of adventurers. “There are many more things to do here than just mountain biking. People can bring their families. There’s tons of hiking; people don’t realize we have 50 different named trails nearby. We have a yoga studio in town. There are waterfall hikes and overlooks, and in winter there’s skiing and snow-shoeing.” Salt Creek Falls, second largest in Oregon after Multnomah Falls, is just a 30-minute drive away.

Tracey and Noah have been busy renovating the lodge. They’ve also created a cozy market that serves small bites, draft beer, good wine, travel essentials and souvenirs. From the front door of the market you can walk across the street and be on legendary Aufderheide Drive Scenic Byway — a 60-mile, paved riverside road shrouded by a lush tree canopy.

I highly recommend checking it out while the river and the wind are the loudest sounds in town. When you get to the lodge, tell Tracey and Noah I said hi. WestfirLodge.com.

Thanks for the thoughtful writeup Jonathan! I’ve been riding in Westfir since the early 90’s and this fills in a lot of gaps for me about the area’s history. I’m glad the Westfir Lodge is stepping up, and I wish Tracey and Noah the best of luck.

If you don’t mind a shameless plug, one great way to experience the best mountain bike trails around Westfir and Oakridge is Mountain Bike Oregon, coming up in a few weeks. I’ve been volunteering for MBO for several years, and it’s always a great time. It’s based in the old mill site and covered bridge in Westfir, and includes shuttled guided rides, food trucks, “adult beverage garden”, demo bikes, camping, and all kinds of shenanigans with a few hundred other bike geeks.

Just a heads up, the Aufderheide Road is closed due to landslide (second slide in 2 years!). I paid the price of not doing my homework and rode from Eugene to Westfir only to find out I couldn’t ride north back to Portland. Had to ride back to Eugene and up the Will. Valley instead. Wouldn’t have minded except height of grass pollen season, which I was trying to avoid. But it was good exercise!

Love the CoMotion build. Noticed it at CO Gravel and was wondering who owned it.