Portland Parks & Recreation is teeing up two projects that will lead to closures of separate sections of the Springwater Corridor path starting in the middle of May.

The closures will be between SE 45th and 55th and between Circle Avenue and 174th.

Below is the information on each project and the official detour map. 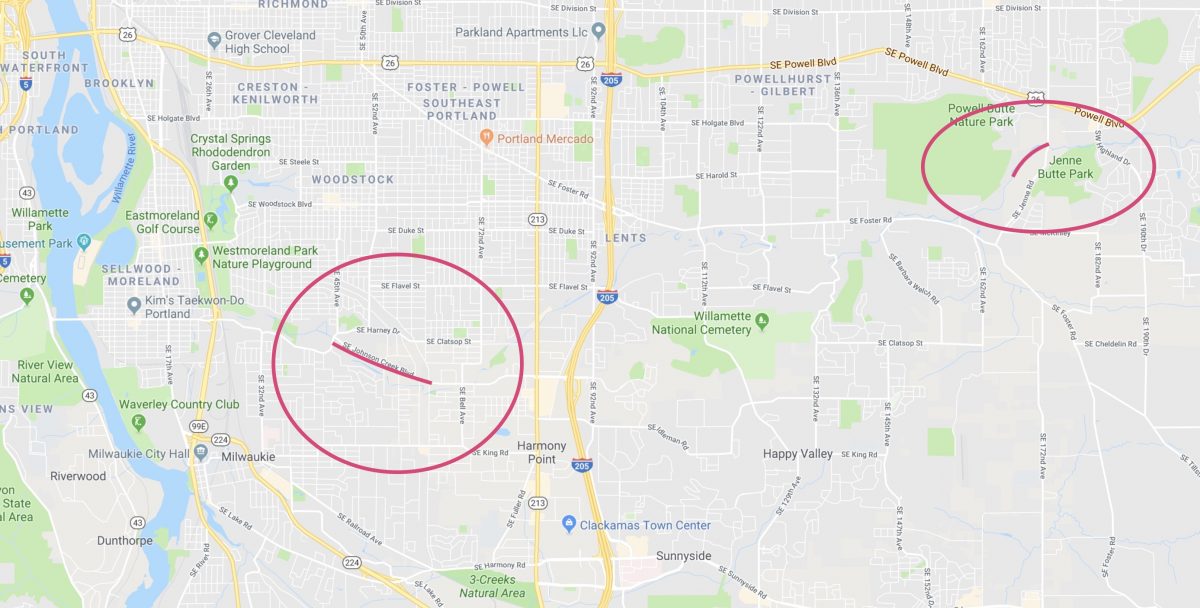 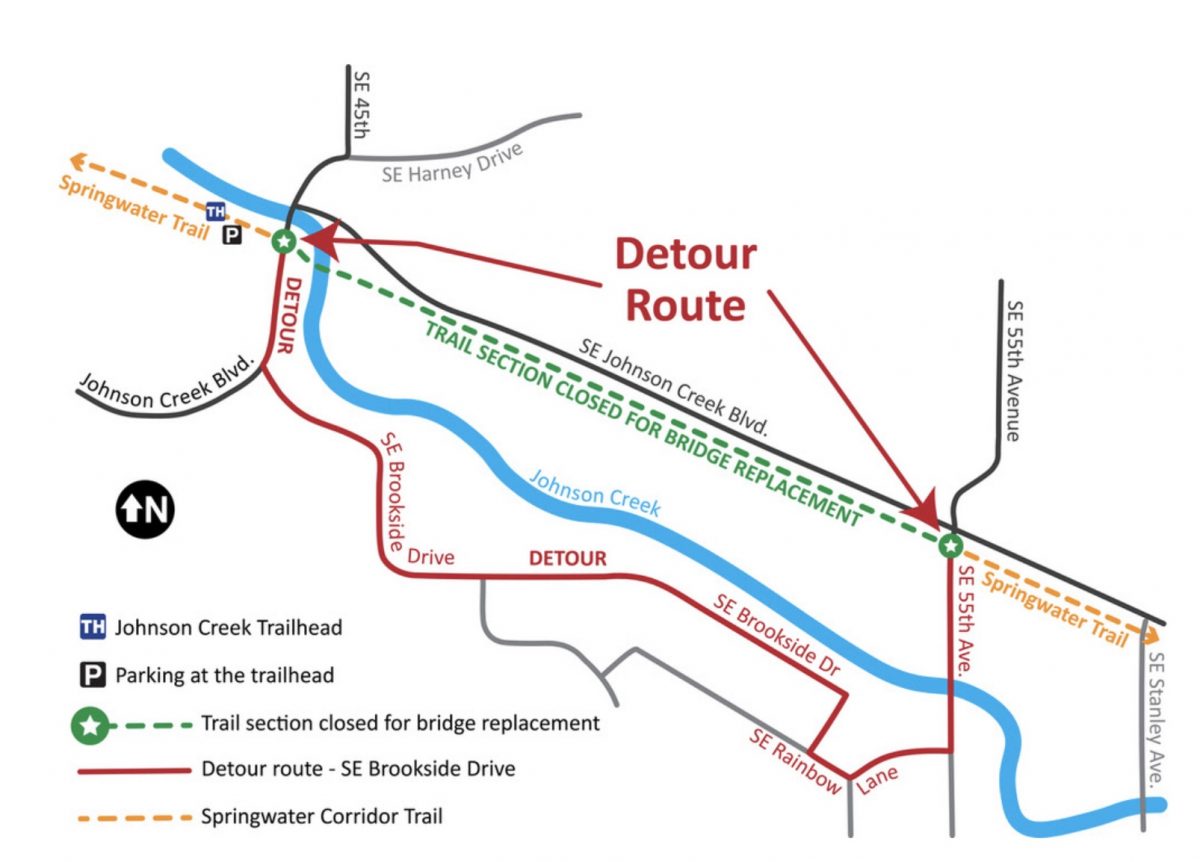 Bridge #48 located near the Johnson Creek Boulevard trailhead at SE 45th Avenue and Johnson Creek Boulevard will be replaced. It is the original wooden trestle bridge from the Springwater Division Line rail developed in the early 1900s with footings in Johnson Creek. The new bridge will be constructed with steel and concrete, and its footings will allow for clearer passage of Johnson Creek, which will improve fish habitat and reduce debris accumulation. Construction is expected to start in mid-May 2019, with completion in November 2019. 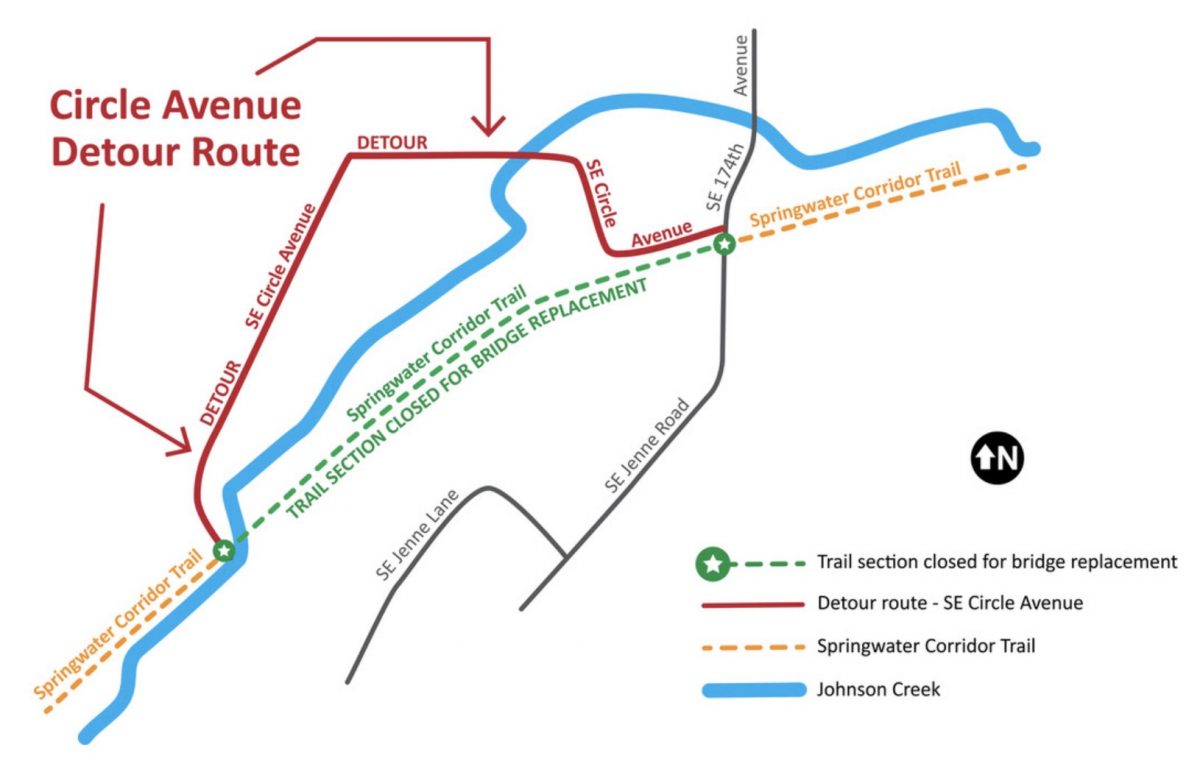 Bridge #140 spans 114 feet and crosses Johnson Creek near Circle Avenue. The western half of the bridge’s structure was replaced with steel in 2006 due to deterioration, and the timber decking was salvaged and reused. The decking has now reached the end of its service life and is presenting a hazardous condition to trail users. It is slippery, uneven, and has large gaps. The decking will be removed and replaced with asphalt. The handrail will be salvaged and reinstalled by the contractor. Construction is expected to start in mid-May 2019, with completion in six to eight weeks.

In other route news… Multnomah County has officially re-opened NW Newberry Road to all users following the repair of a 2017 landslide. The County has also re-opened NW Rocky Point Road after it was closed by landslides in recent storms. Track all our advisories here.

Why the Rube Goldberg detour on Brookside when you can just jump on Johnson Creek for less than a mile?

I thought the same thing, but there’s only a few inches of shoulder and people are always speeding.

However, will the entire length of that segment be closed? The bridge is right at the end of the closure, so you can probably ride some of that part of the trail and then exit at a driveway and only ride on Johnson Creek for a short distance (1000′).

That detour looks like it might actually be pleasant (maybe the intent is to keep it 8-80). But it sure does seem excessive. I wonder if this would work, for those who don’t mind 0.17 of a mile on a busier road: http://www.gmap-pedometer.com/?r=7363487
Close

Odd that the default Google Maps view is used to show path closures floating out where there are no visible paths. Would have been much easier to visualize for path users if the Bicycling view that actually shows the Springwater Trail was used instead.

That wasn’t supposed to be a reply in this thread, but with the comment system crippled it’s hard to tell if you’re still in a comment thread without going back to the base page again.

Odd that the default Google Maps view is used to show path closures floating out where there are no visible paths. Would have been much easier to visualize for path users if the Bicycling view that actually shows the Springwater Trail was used instead.

I’m really excited that these bridges will have a concrete deck. The wood planks are horrible on a skateboard. But I’m really sad to see another summer without the springwater trail. It’s not like we have that many car free options here.

Whoever is the project manager for this work has a very generous definition of “Mid-May” since as of this morning (May 24th) both bridges are still open. There’s been no sign of any prep work other than a few signs that were placed around both bridges and have been moved. Are they just waiting for the height of summer when there will be even more folks out riding on the Springwater?