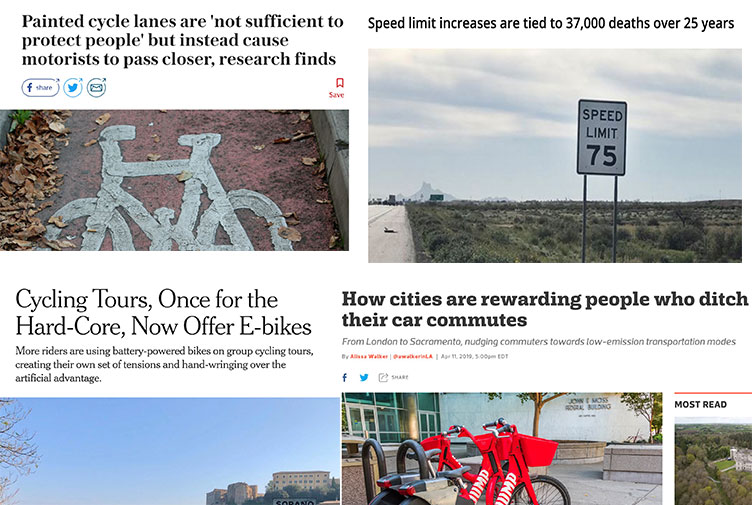 This week’s Monday Roundup is sponsored by Ride Like a Girl Cycling, who invites you to their ‘Coastal Delight’, all-inclusive training camp for beginner riders: May 20-22 in Pacific City on the Oregon Coast.

Welcome to the week!

Here are the most noteworthy items we came across in the past seven days.


Where protection is the law: Big news from Massachusetts where the city of Cambridge passed a city council ordinance that mandates physical protection for bike lanes. City Lab says the law makes new bikeways “bikelash proof”.

Paint not enough: Why did Cambridge take such a drastic step to ensure physical protection? Easy: Because paint-only bikeways — like the ones the City of Portland has deemed sufficient for much of our network — are woefully inadequate.

Walmart to sell high-end bikes: We are watching very closely as news of Walmart’s high-quality carbon MTB and gravel “Viathon” bikes ripple through the bike industry.

Time to pay up: The reason so many people feel entitled to using public roads for free is because government has always subsidized it. That is finally changing as congestion pricing moves to the forefront.

Death of Kelly Catlin: The NY Times takes a closer look at why an aspiring, Olympic-level track racer enrolled at Stanford University killed herself?

Mayor Pederson? Multnomah County Commissioner Jessica Vega Pederson has started to make a name for herself as a transportation reformer. Now she’s reportedly interested in being Portland’s mayor.

E-bikes on tour: Another facet of the impending shift toward e-bike acceptance is multi-day tours. Imagine being able to travel almost anywhere by bike, for several days, without having to worry about your fitness!

Moving the needle: Writing in Curbed, Alissa Walker updates us on new policies from London, Sacramento, New York City, and Cambridge (more on that later) intended to discourage people from driving.

High speeds kill: New research from the Insurance Institute for Highway Safety found that a 5 mph increase in the maximum speed limit was associated with an 8 percent increase in the fatality rate on interstates and freeways and that about 10,000 people die in the U.S. every year due to driving too fast.

Specialized recall: If you have a new Roubaix, Roubaix, Ruby, Diverge, or Sirrus model bicycle, it might be susceptible to cracks in the steerer tube according to a safety recall notice.

Bike Lanes: It’s nice to know officially what we’ve always known on the street, bike lanes don’t protect cyclists unless there’s a meaningful barrier. And we’ve always suspected that drivers actually drive closer to us, but now it’s been proven they do in fact do so when they see a bike lane. And as an article here a few months ago pointed out, bike lanes are for cars, to get them to drive within their lanes, as a sort-of traffic calming device. But they were never designed for the majority of cyclists, fearful of getting hit from behind or sideswiped by cars and trucks.

But the problem of mandating any sort of facility designed to help a vulnerable user, such as the protected bike lane policy in Cambridge MA, is that the people doing the implementation are themselves by-and-large 100% car drivers. So naturally I expect to see poorly thought-out protected bike facilities get implemented on a massive scale, with crossings done just-so-wrong and totally unprotected intersections put in with reckless abandon, like they do out here in North Carolina. If car-driving highway engineers can cut corners, they always will.

B. Carfree
Reply to  David Hampsten

The Australian passing study apparently compared door-zone bike lanes to streets lacking on-street parking and bike lanes. Since dzbl’s are generally shoe-horned into overly narrow spaces so that transportation departments can pretend to be bikey without interfering with any services offered to motorists like free parking, it’s not really a surprise that they don’t work. Bottom line is that no one should ever ride in a dzbl.

It’s a gross overstatement to conclude that motorists pass overly close when a standard 6-7 foot bike lane is placed on a street clear of the door zone. Poor infrastructure is poor infrastructure, but standard bike lanes are fine and in many cases vastly superior to what is being implemented in the name of “protection” (mid-block protection only, and even then only in the absence of driveways). (Caveat: even standard bike lanes can be done poorly, especially when the street is severely crowned and speed limits are silly-high.)

I remember just a few years ago many advocates defended dzbl’s because it was found that new cyclists would ride a few inches further from the parked cars in them. However, since they were still riding well into the door zone, that argument never made sense.

David Hampsten
Reply to  B. Carfree

The current federal standard is 6 ft, but it was 5 ft for several decades. Not that it matters much, as most cities (Portland included) the outer limits of the stripes are counted within that width, making most bike lanes sub-par. Fortunately most aren’t as bad as the one I used in Durham NC that was 1 ft wide, complete with street symbols and signage, or the super-narrow ones I saw in Britain.

The main point is the behavioral reaction of car and truck drivers who routinely cross the lines, especially on outer Powell Boulevard, 122nd, outer Division, etc., indeed most of the rest of the USA, as they drive 11-20 mph over the speed limit. It’s only in places where an overwhelming majority of drivers go under 25 mph that bike lanes make any sort of sense – which ironically is reflected in the Copenhagen bicycle chart. http://www.copenhagenize.com/2013/04/the-copenhagenize-bicycle-planning-guide.html

GlowBoy
Reply to  B. Carfree

Sorry, but the conclusion that bike lanes cause motorists to give cyclists *less* room does not pass the sniff test.

I read the median passing distance of a cyclist in a bike lane was 5.6 feet. That’s a bike lane distance in most of the US.
I’m not sure what the point of the story is other than what has always been true, more can always be done.
I think having bike lanes is better than not having bike lanes.
Buffered lanes are better.
Protected lanes (physical barrier) are even better.

Speed limit increases on highways: always fascinating to read the contorted justifications for why doing so is safer…
Ha!

E-bikes are the norm for cycle touring in Europe. Along popular cycle touring routes, most hotels have designated bike rooms with charging stations and some popular tourist destinations have public Radfarer Tankstella. Many hotels rent e-bikes or belong to networks that rent one-way e-bikes. They will also transfer your bags to your next hotel for a modest fee. Long distance bike touring for families on e-bikes is already popular. And, if that isn’t enough, they have clean efficient mass transit and trains. Don’t want to ride in the rain today – take the train.

Sure Sure, but do they have giant extra cab diesel pickups or Neo Muscle Cars like we have here in Murica?

Middle of the Road Guy
Reply to  bikeninja

Nope. They are such a rarity that they actually look like circus cars compared to those around them.

The only pickups I have seen in Europe are work vehicles. I saw a few jeep-type vehicles, but very very few.

It’s not that the steer tube could crack, but some of the newer models have a built in suspension “Future Shock,” that relies on an alloy clamping collar to hold it together. The anodizing on the collar can crack, which could eventually lead to corrosion and failure of the collar.

It’s a simple matter to replace the collar. Contact your nearest Specialized dealer and they’ll be glad to get it sorted out for you.

The only protected bike lanes I support are with k rails not parked cars.