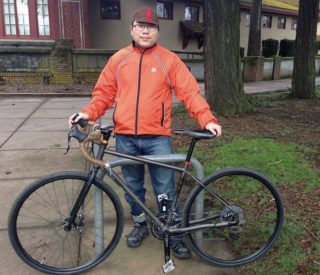 Patrick says whoever stole his gray, Specialized AWOL road bike planned ahead and knew what they were doing. The bike room it was parked in is located on the first floor of a relatively new, four-story apartment building on North Interstate Avenue. The bike parking room is in the back of a fenced-off parking garage and it’s enclosed by a chain-link fence of its own. Patrick said his recent theft was not the first one they’ve had.


Back in November of last year, Patrick left a bike unlocked inside the bike room and it was stolen along with one other bike. The thieves cut through the latch in the fence to get them. After that incident the property manager repaired the fence but made no other upgrades.

Be on the lookout for this bike!

This time around, Patrick was more prepared. His bike was not only inside the fenced room but was locked to another bike with a $100 Abus Bordo folding lock and two cable locks. He says the thief/thieves climbed over the wall of the parking garage and cut a large hole in the chain-link fence. At least three bikes were stolen and all the locks were cut. “I found it interesting they decided to cut the lock instead of the cable… I felt safe with the Abus lock,” he shared with me today via email.

As for the bike room, Patrick has recommended some upgrades and more secure designs to the property manager. He posted the incident to Nextdoor and heard from a local bike parking specialist, draw2build LLC (owned by local bike advocate Scott Mizee) who has offered to consult with the property manager on a new design.

Patrick has filed his theft with the police and listed the bike as stolen on BikeIndex.org. He says he no longer trusts chain-link fences as an adequate deterrent and he will only use heavy-duty chain locks on his bikes in the future. He also strongly recommends taking pictures of your bike (especially if you change parts a lot) to make it easier to settle a claim with your insurance if/when it gets stolen.

Sorry this happened to you Patrick! We’ll keep an eye out for your bike and let us know if your bike room gets an upgrade. 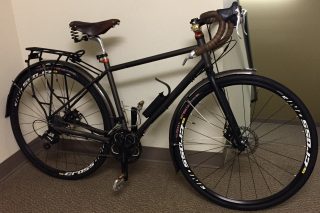 Back home and safe.

“Someone recovered my bike for me. He said he got it from a camp near 82nd and the MAX station.

Someone called me from a phone number with no caller ID so I am assuming he wishes to remain anonymous. He introduced himself as David. David manages a restaurant which delivers food to the homeless and he collected the bike at a camp near 82nd and the MAX station and met me at Duluth Trading Company in Jantzen beach. That’s when he told me how he got it back. I told him about our neighbors’ bikes and he said he saw another Specialized AWOL and a white Kona there too. They were too nice compared to the other “zombie bikes” he said.

Condition of my bike is good overall. Brooks saddle is wet from being left outside in the rain but can be dried out and reconditioned. I am grateful that we still look out for others in this community.”