I’ve been thinking a lot lately about where we ride. Whether I’m in on the streets of inner northeast Portland, or way out in the middle of the woods, I want to go below the surface and beyond the pretty views. I want to know about the people who lived on the land long before we pedaled through. I want to know what they did, what they cared about, and why they’re no longer there.

When it comes to unpaved roads in the hills above Scappoose — from camps and mills established in the 19th century, to the active harvesting we see today — much of that history revolves around logging. On Saturday I witnessed some of it first-hand when I joined a group of fellow unpaved road lovers at a gathering hosted by the Coastal Mountain Sport Haus in Vernonia.

Below are a few pics from my early morning ride out to the Sport Haus:

As we shared in our 2014 profile, the Sport Haus is a bike-friendly lodge on Highway 47/Nehalem Highway (about 10 miles north of Vernonia Lake) that’s owned by Glen and Sandy Crinklaw (pictured below).

Glen is a retired Columbia County Parks employee who knows quite a bit about the timber industry and its impacts on the land, people, and politics. Both he and Sandy are students of history; the Sport Haus itself sits on land granted to Sandy’s family during the Homestead Act. Riding with them adds meaning to what can otherwise seem like anonymous (yet beautiful!) dirt roads.

With peak riding season approaching, the Crinklaws and their friend Dan Morgan (a local gravel legend) wanted to show off a new loop they’ve affectionately named, “Bushwacking, Booney Riding to Camp 8 and beyond” (see the route and full description on RideWithGPS.com).

We started by hugging the Nehalem River; first on smoothly paved highway, and then on unpaved logging roads. 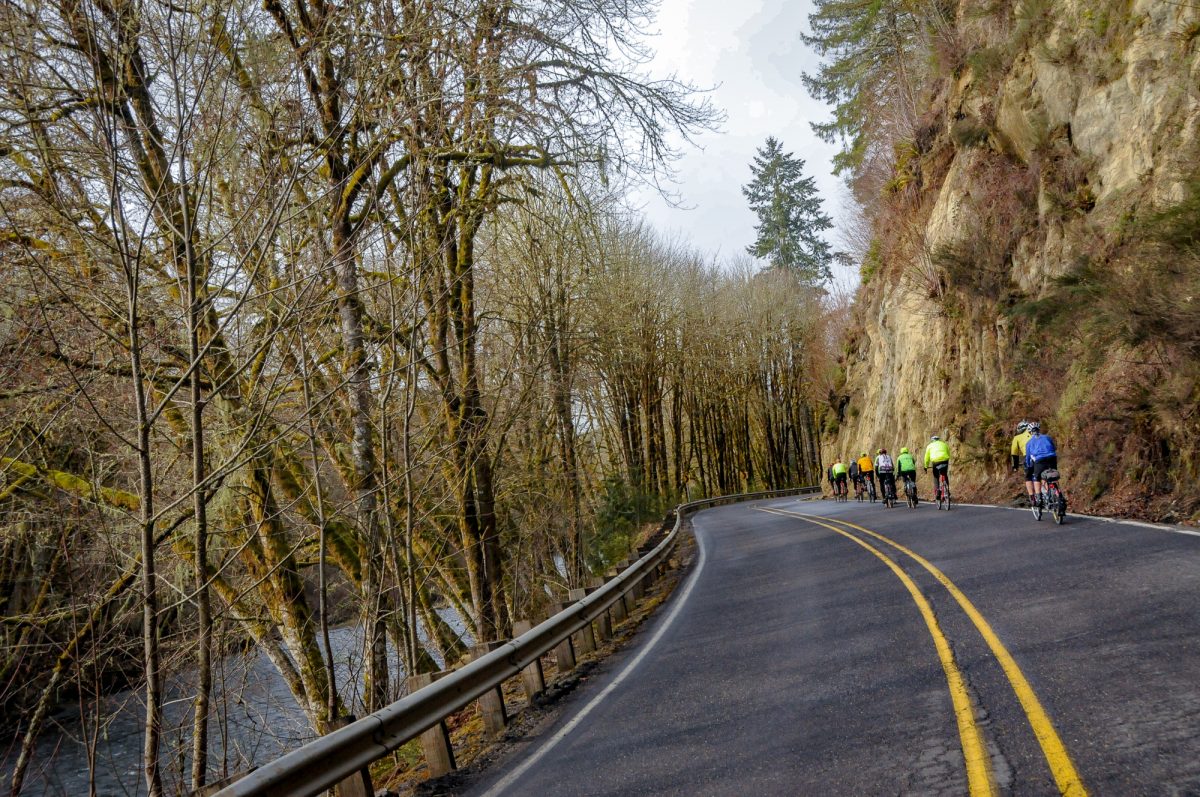 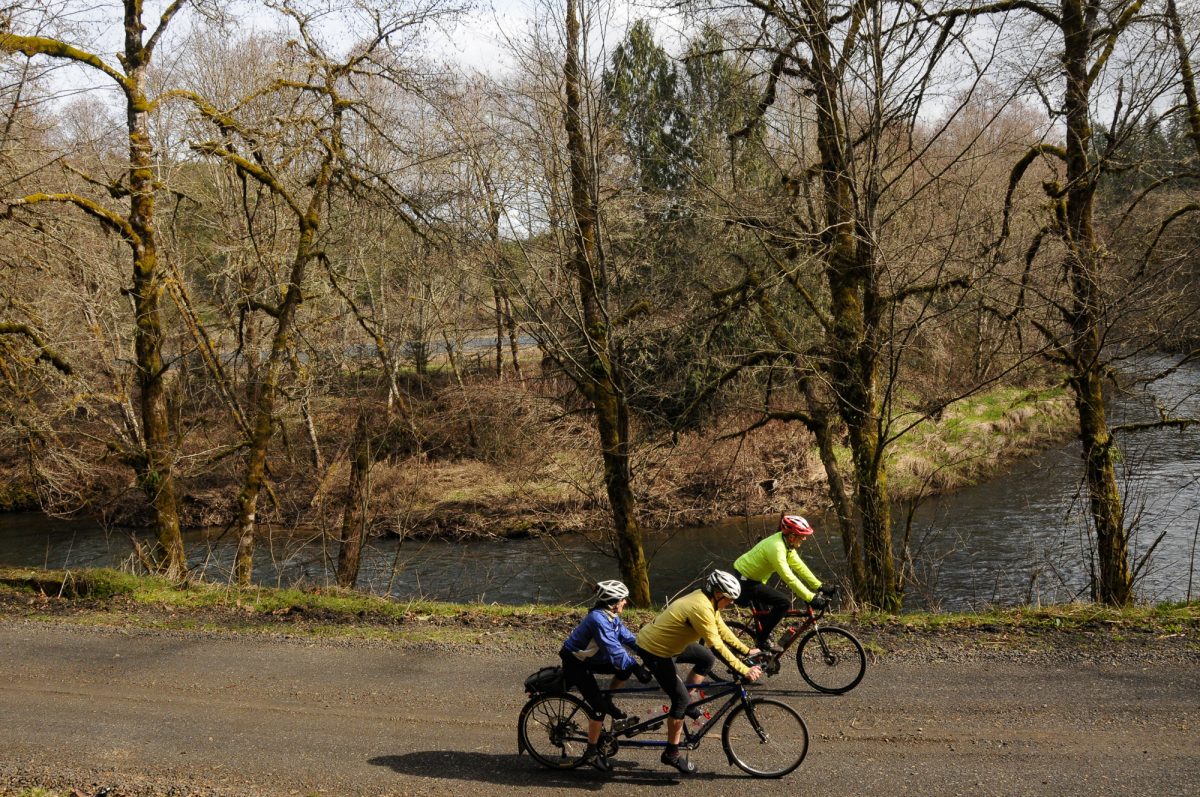 We then found ourselves on the Crown Zellerbach (CZ) Trail, which is also known as Columbia Forest Road in its northern section. 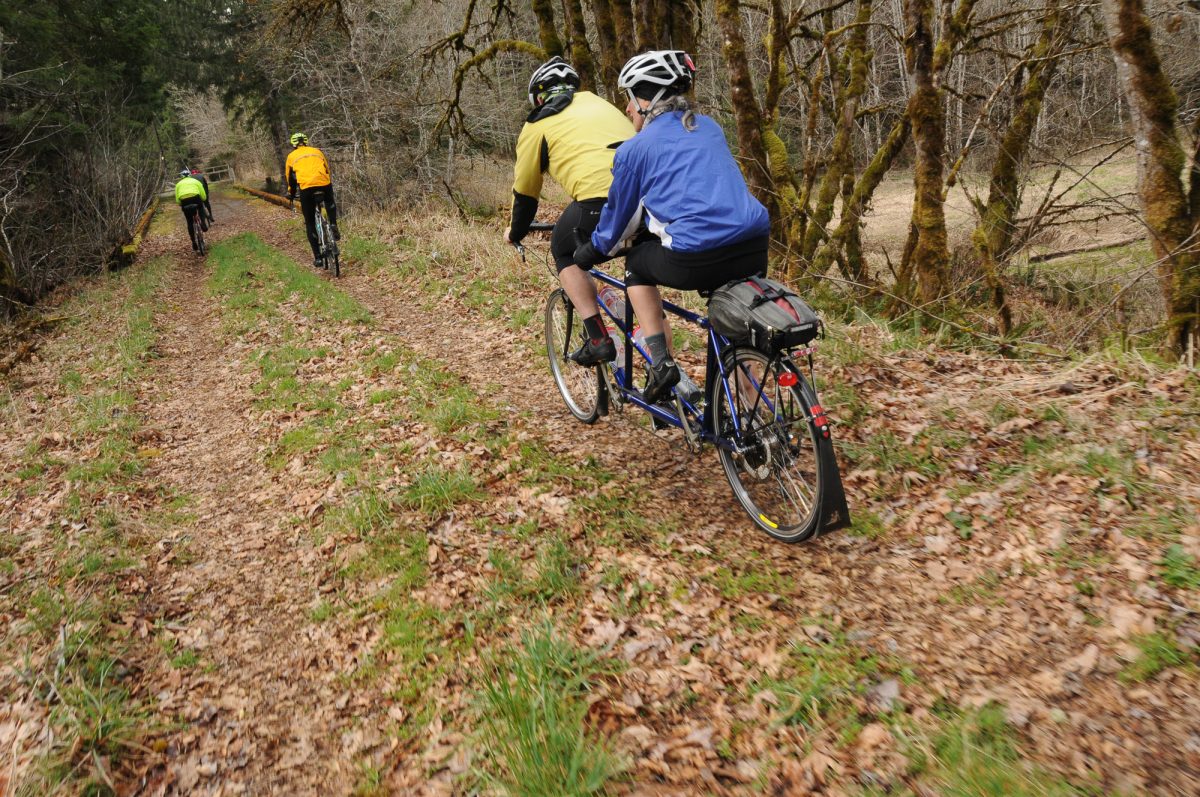 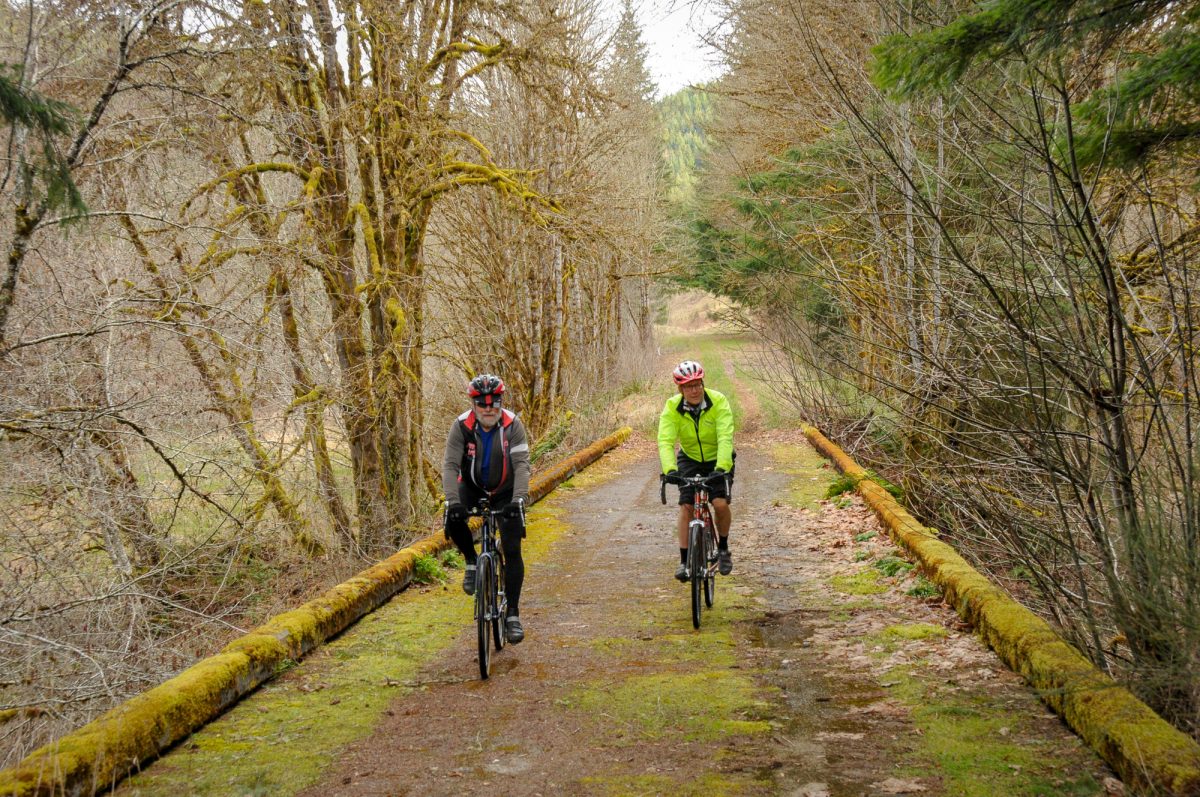 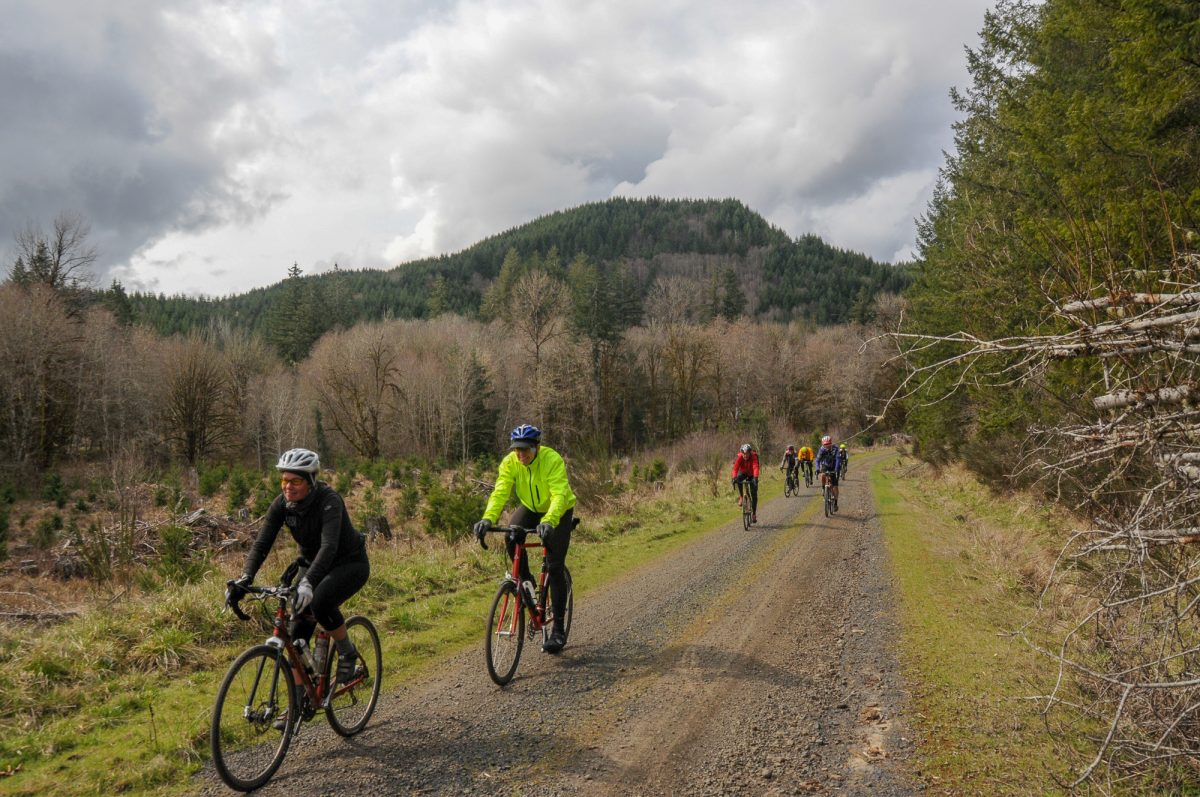 There’s a section just a few miles from its northern end (at Pittsburg) that opens up into a vast meadow. On Saturday, Glen shared a bit of history about what used to be there.

In the 1920s it was known as Camp 8. Back then it was a home to a bustling encampment and saw mill serviced by a railroad line. Nearby was a separate camp for Chinese people who worked on the railroad. Camp 8 was in operation until the 1970s. There are only a few remnants of heavy machinery once used at the site, so it’s very easy to just pedal by here and never realize what used to be. Now that I’ve gotten a taste of the history, I’m inspired to learn more.

And by the way, if you haven’t ridden “the CZ” yet, I highly recommend checking it out.

South of Camp 8, we veered off the CZ onto an overgrown road that didn’t look like anyone ever used it. It’s a section of Camp 9 Road between Kenusky Creek and Dog Creek that’s largely overgrown. In some sections it was hard to even walk our bikes due to recent landslides. Our reward for the slog was a section of forest reserve that has some of the tallest, second-growth trees I’ve ridden through anywhere in the region. 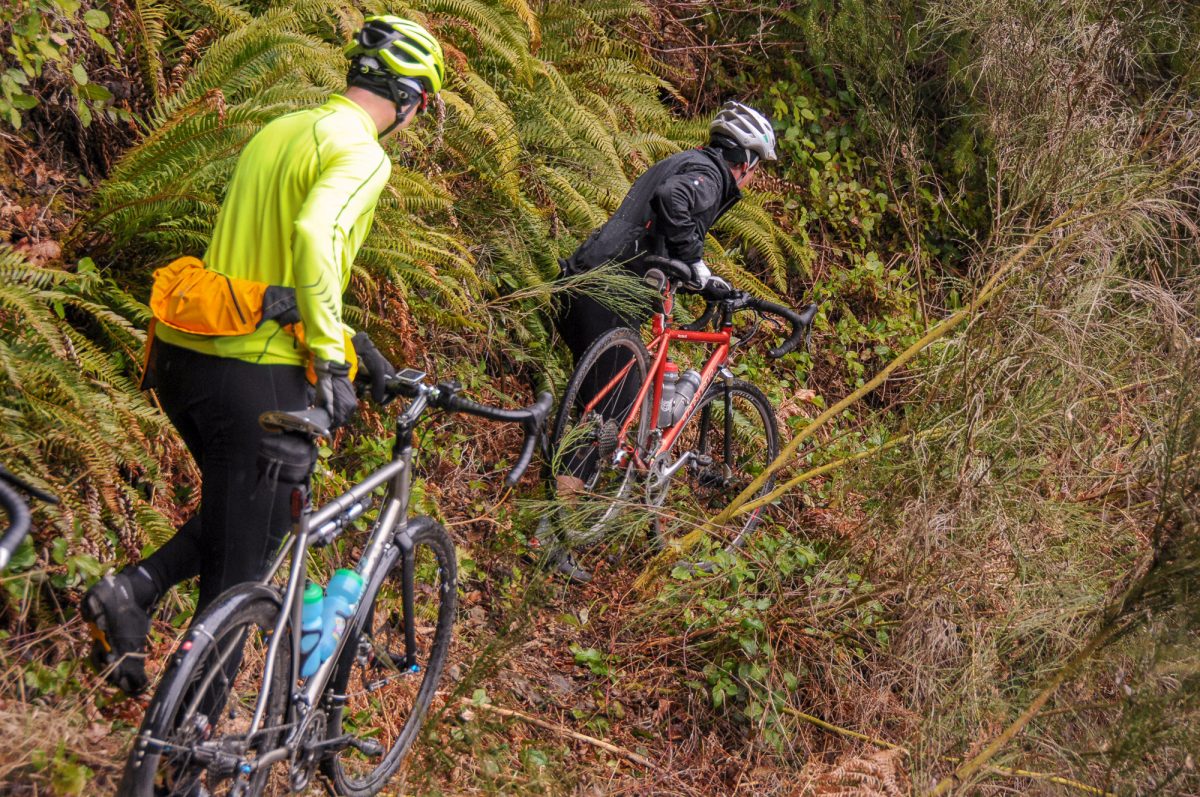 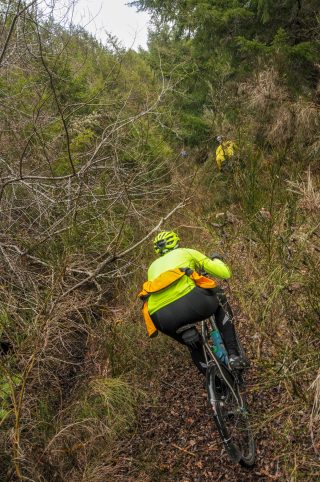 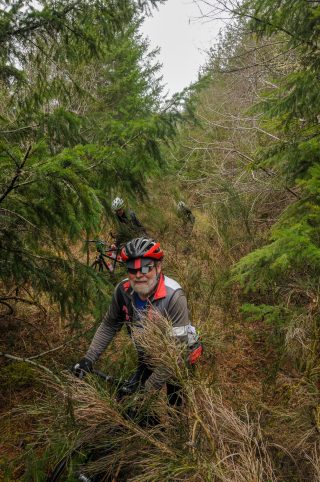 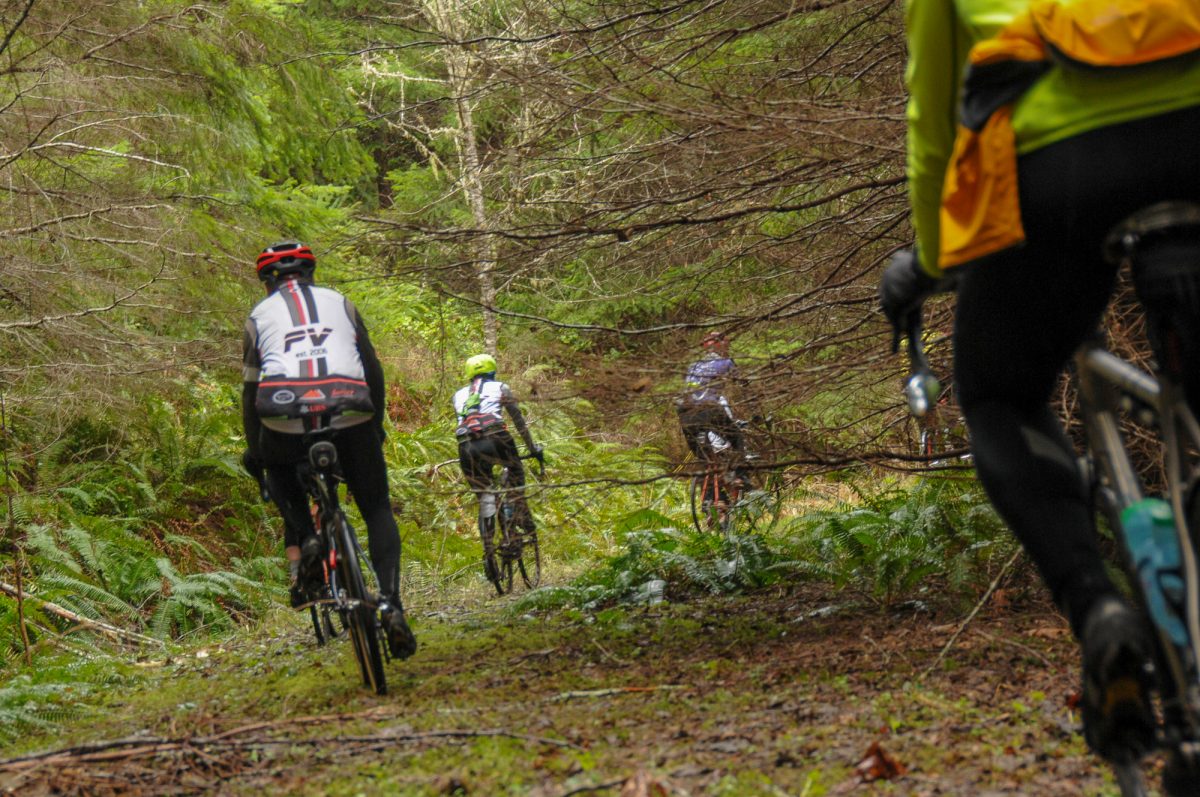 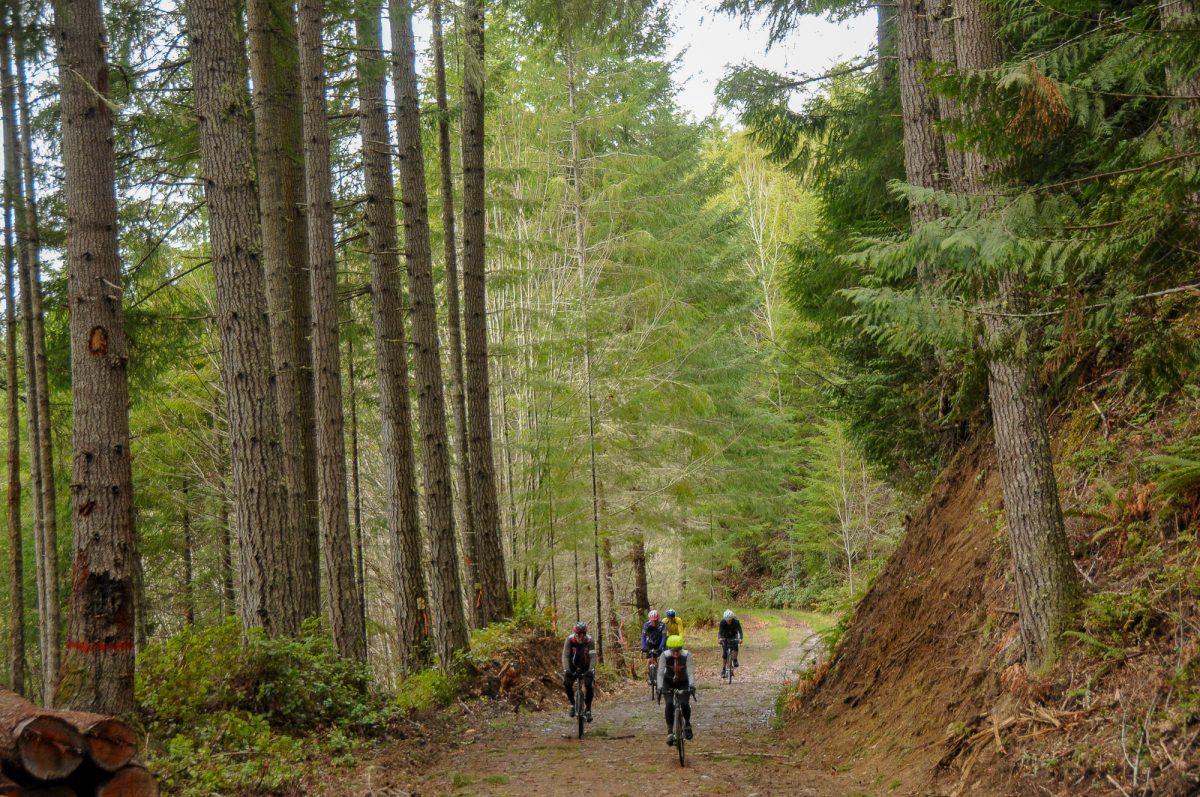 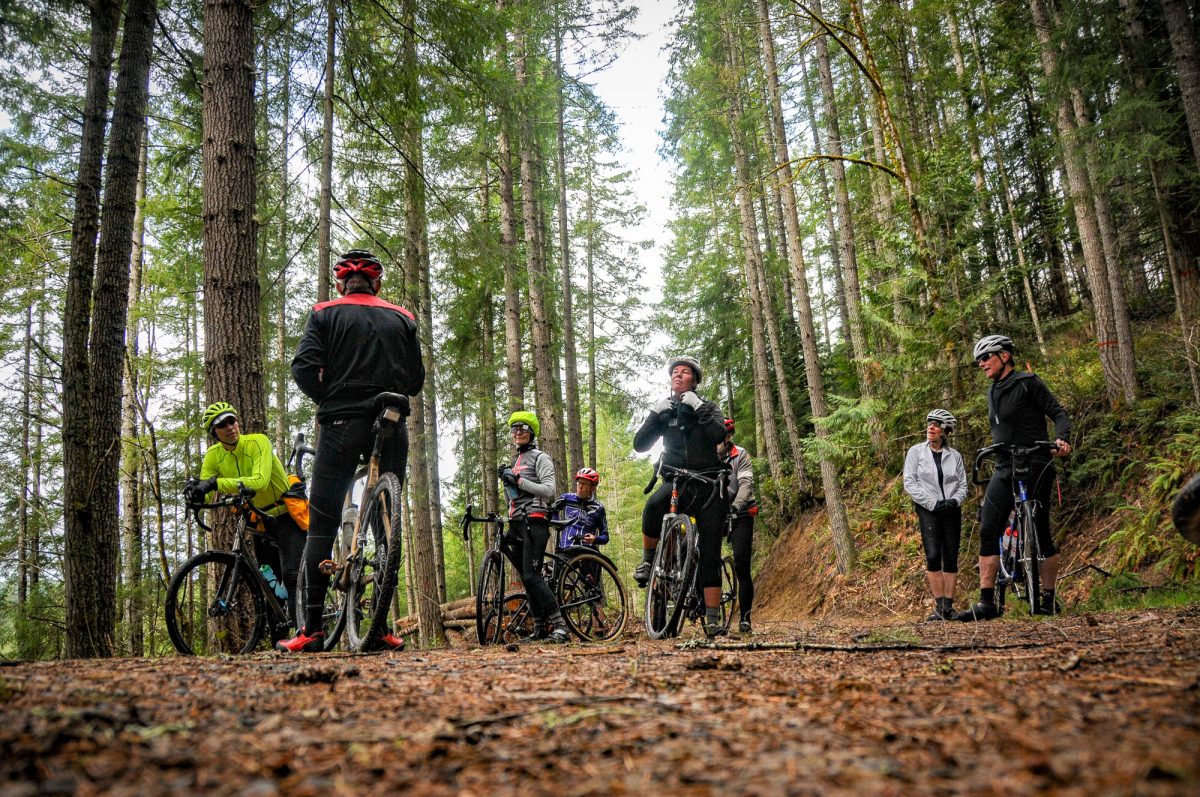 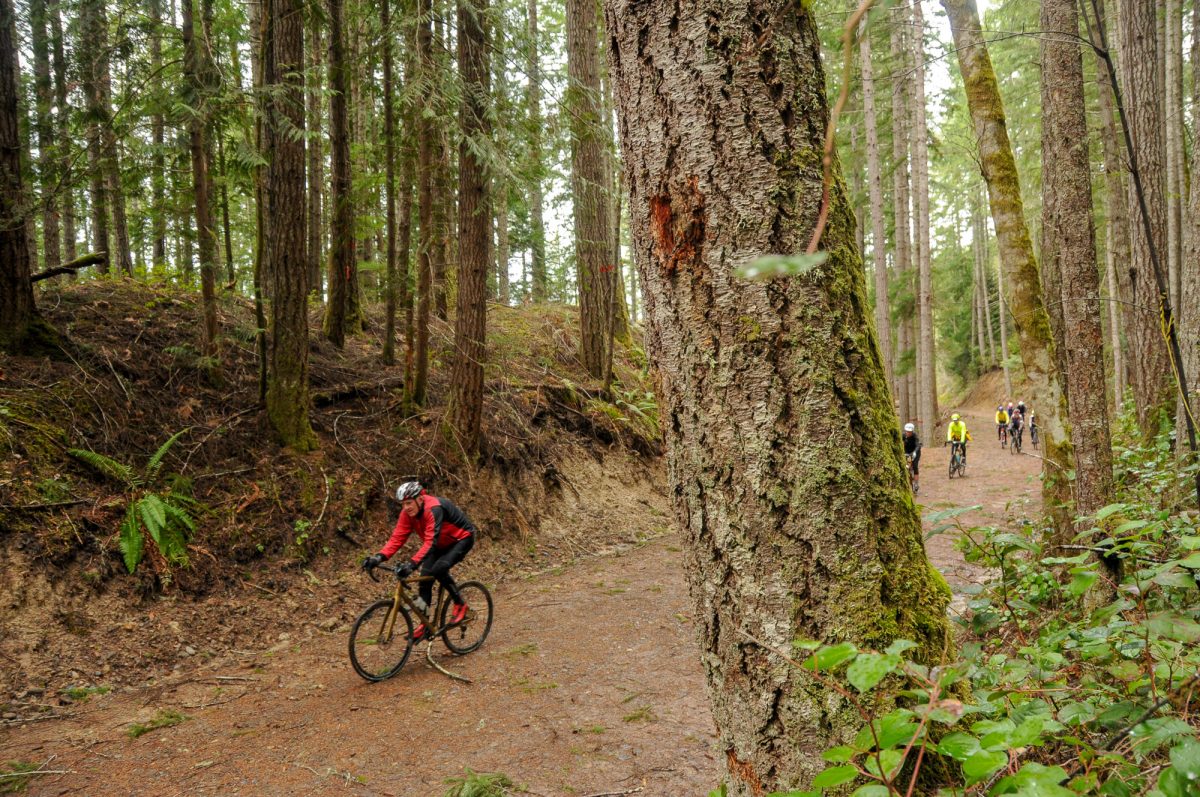 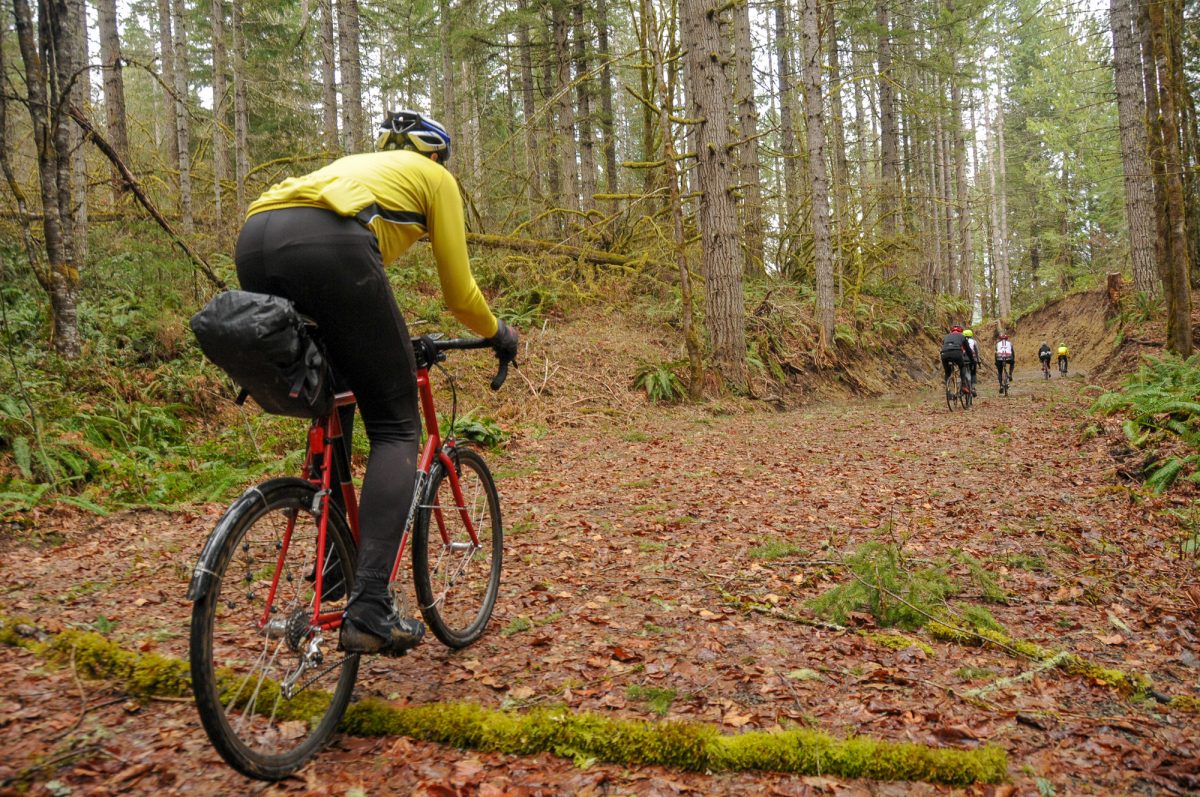 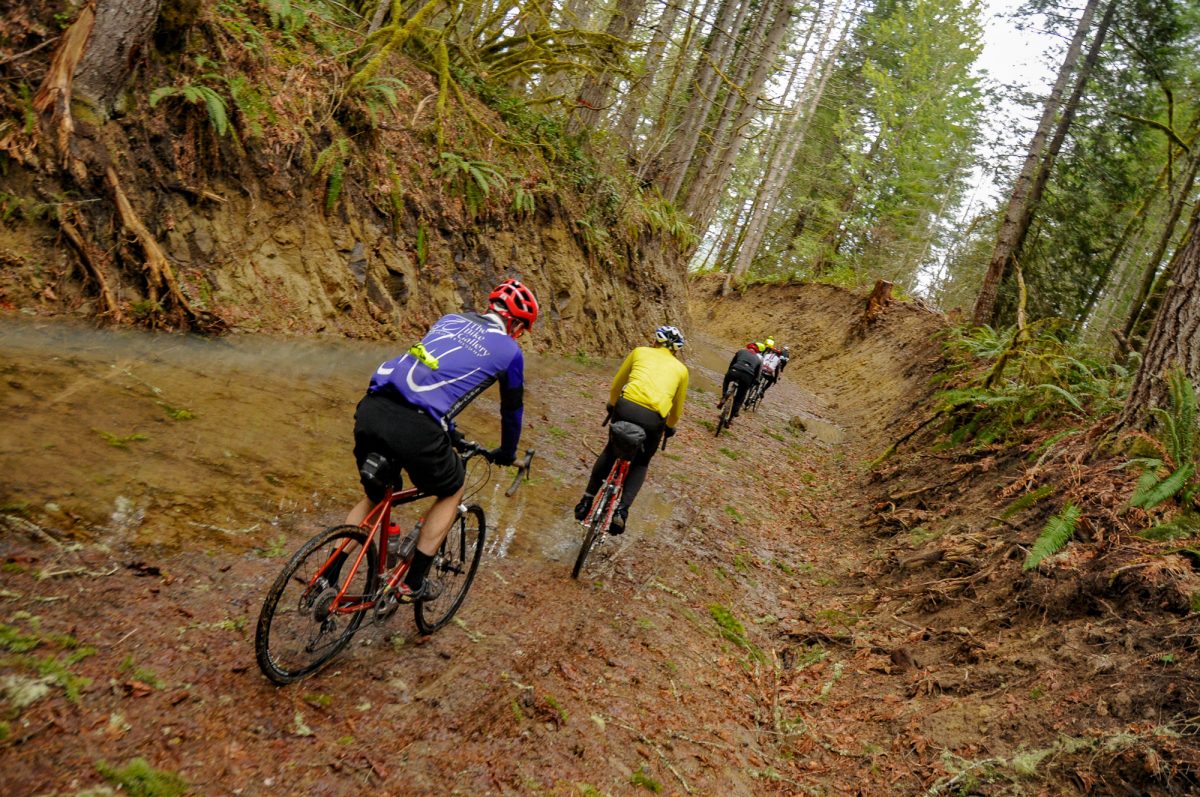 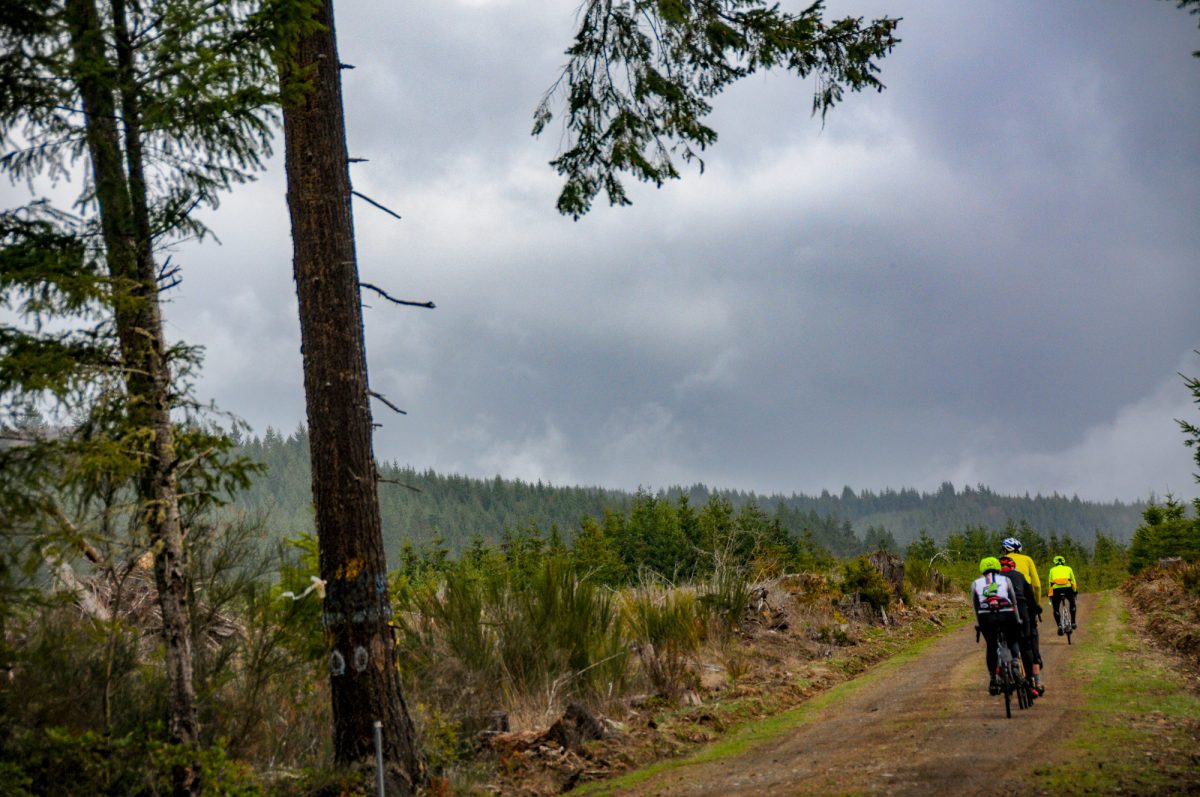 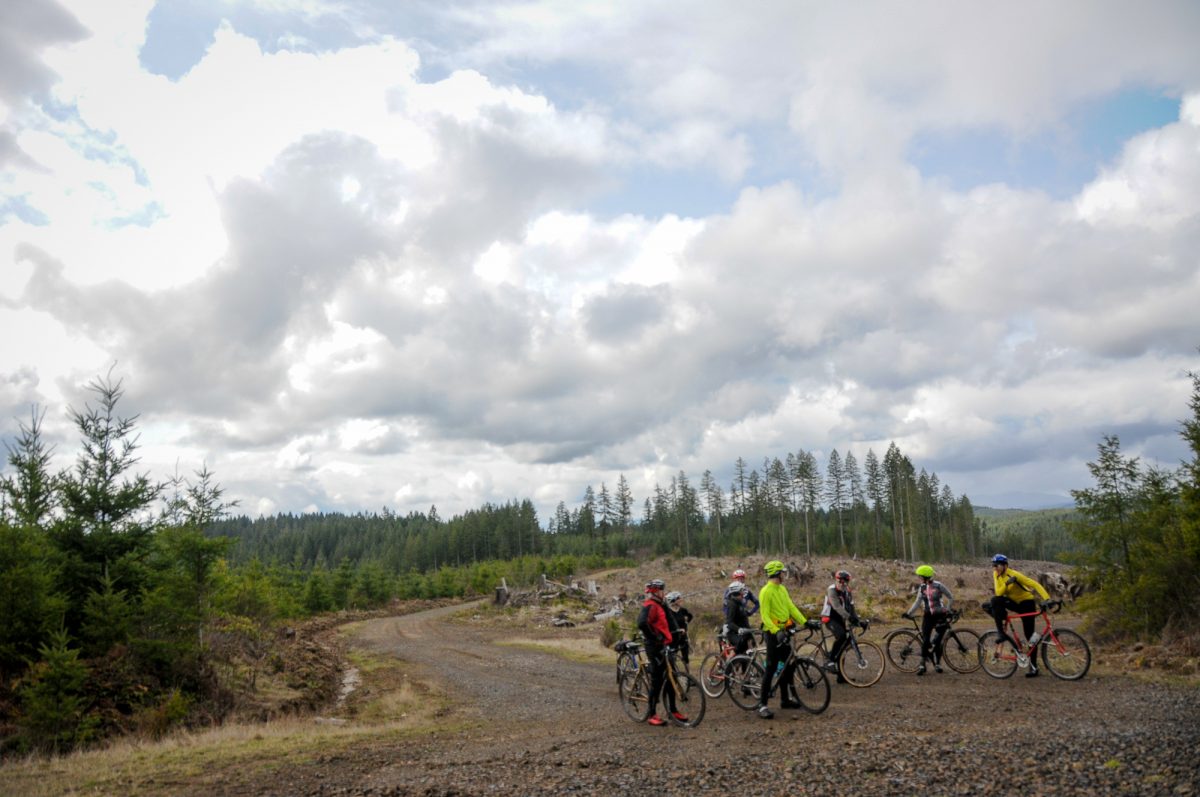 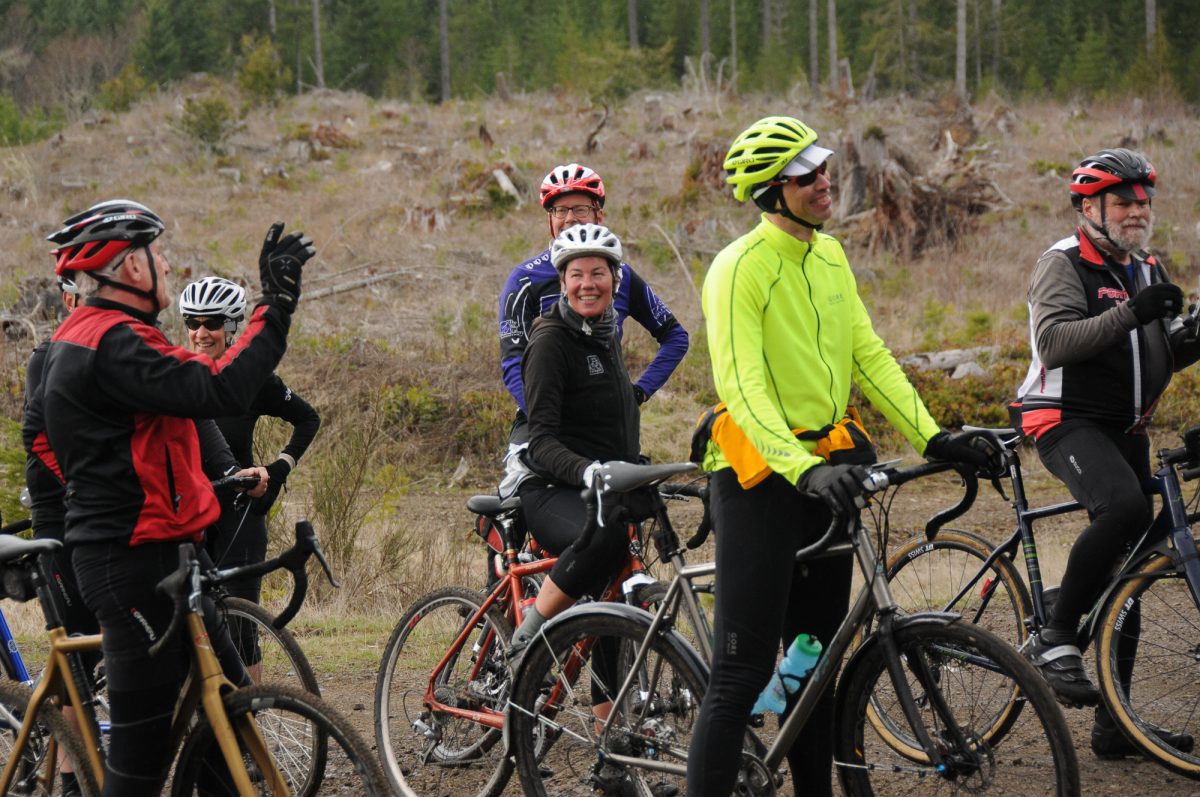 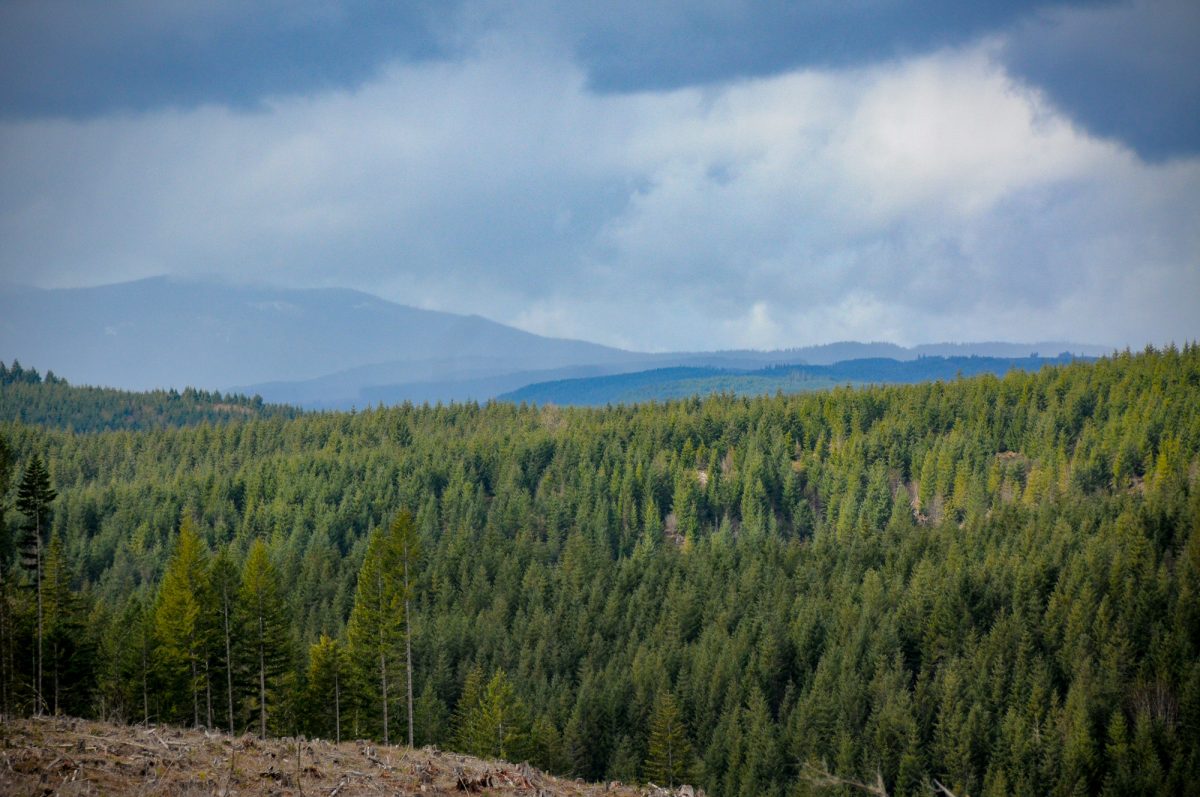 Our route eventually took us to Camp Wilkerson where we met up with Apiary Road for a fast, paved descent back to Highway 47, the Nehalem River, and the Sport Haus (where a feast awaited!).

There’s a ton to explore in this area and it’s relatively close to Portland. Due to the patchwork of timber company ownership and active logging areas, I recommend staying on vetted routes like this one (see below) and/or only riding on weekends. There’s an effort from local governments to develop and promote riding in this area; but no one is eager to step on timber company toes.

BikePortland’s 2019 gravel coverage is brought to you by the Oregon Triple Crown Series, Co-Motion Cycles, Rolf Prima Wheels, and Ride With GPS. Check out our Gravel Riding Guide for more rides, routes, recaps, and resources.

Columbia Co. also has an abandoned train line from the yards near Longview all the way to Astoria. That would be an amazing path.

I was out there about a week ago an Weyerhaeuser requires $75 now to go on any property which is aggravating. It kind of screwed up our trip, there’s a lot of good country out there that’s now off limits.

Yes permits are required for some roads, but by no means all. That’s why I mentioned only doing vetted routes. This particular route is fine. It sucks there’s so much confusion over this issue and it’s going to take some strong advocacy and politics to clear things up.

This route might not be currently legal. Check the landowners permit map. Ride at your own risk.

Thanks… But I am positive this route is legal. It was created by a former Columbia County Parks manager and member of Washington County’s Rural Roads Advisory Committee. It’s legit. 100%. Ride the hell out of it and don’t let anyone scare you off.

Columbia County is such a hidden gem for gravel road riding; and the Sporthaus (& Sandy & Glen) are amazing. But yeah, the whole Weyerhauser permit thing is very limiting & confusing.

The map on the Weyerhaeuser permit site seems to indicate that at least the Crooked Creek Mainline part of your route is on land marked “Restricted Entry”, and within the Columbia-Washington Counties permit area. I hope these permit area boundaries aren’t fluid. That would really make it difficult. https://wyrecreation.com/permits

RB, thanks for that link. I hadn’t known about that. It’s moderately helpful.

Agreed…moderately helpful. I wish it were as easy as a Gaia map overlay.