Tandems and true love: Just in time for Valentine’s Day CBS News has a story about a couple that says their happy marriage of 45 years is due in large part to the 197,000 miles they’ve logged on a tandem.

Representation matters: A cycling journalist noticed something rare during a major SRAM product launch: A black woman as the lead image. Turns out SRAM is doing much-needed work to make the cycling industry less white and less male.

Micromobility conference recap: A measured and informed account of what happened at the first-ever micromobility conference where the focus was on the 90 percent of U.S. auto trips that have the potential to be made by much smaller vehicles — a move that could, “reshape American cities around vehicles that are far more suited to them.”

War on cars, sport-radio style: The latest episode of the excellent War on Cars pod imagines what streets activism would sound like on sports talk radio.

Salem’s “third bridge” debate: A big meeting in Salem today will decide the fate of a major bridge project. Officials have spent 10 years and $9 million talking and planning for the project with the debate falling on familiar lines: Supporters say it’s needed for growth and traffic relief while detractors worry about environmental harm and other impacts. The Salem Breakfast on Bikes blog has done amazing reporting on the issue.

Green New Deal: Oregon’s House Rep. Earl Blumenauer is one of the early and ardent supporters of this high-profile initiative. So far he hasn’t said he’ll use it as a vehicle to push for bicycling infrastructure (perhaps he’s saving that announcement for the National Bike Summit in March?) and overall, transportation planning wonks say it “fails” to address land-use and sprawl (see next item).

Land use is everything: Reuters reports on the vast challenge of reducing tailpipe emissions in California (and Texas) because the impacts of car-centric, sprawling urban design far outweigh current mitigation efforts. They should look to Seattle and Minneapolis for inspiration.

Planning for who?: Noted bicycle researcher Anne Lusk makes the case that cities rely too much on feedback from wealthy white people when making decisions about where to put high quality cycling facilities.

Thanks to everyone who shared submissions this week!

The Slate piece criticizing the Green New Deal is a perfect example of blind spots. The critique starts off well: electrifying transport is no solution, but then quickly goes off the rails:

“…we can fix this. We build more than 1 million new homes a year—we just need to put them in the right places.*

Growth is the problem, has always been the problem. Just as electrifying transport is no solution, density in land use is no solution. Both make us feel good but skirt the underlying problem which is growth, too much stuff, too many people, and a merry denial of hard limits.

Love the links as usual. This may make me a pedant but I think the Green New Deal is a set of ideas and goals, not legislation.

Tandems are much faster in the downhill direction, and so too are most relationships of their riders. That couple is truly amazing.

This should have made the cut as well…

TLDR; There is nowhere else in the country where you can commute by bike and have less of a chance of dying, than right here. Hopefully, this motivates some of the fearful who think they need cameras, hi-viz, reflection everything, latest greatest lights, horns, etc. Just ride and be happy you don’t live in Mississippi.

Hmm, look to Minneapolis? Are you sure? It has seen a substantial drop in cycling over the past few years and those commuters are showing up in cabs/Uber. That’s not my idea of progress.

Seattle has done better. While Seattle has also seen a decline, the former cyclists seem to be moving to public transit. That’s better than cars, but I wish for more butts in saddles.

First of all, much of the recent sharp increase in US transportation-associated emissions comes from trucking (e.g. buying bike bling online) or flying (e.g. burning jet fuel in order bike somewhere else). 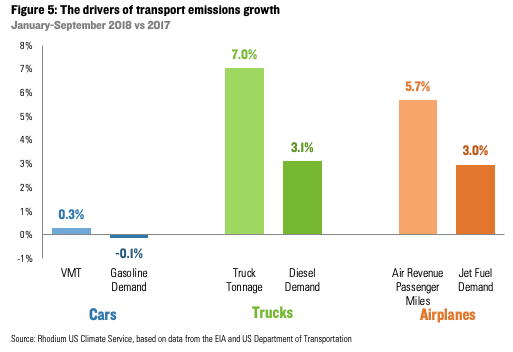 Secondly, the GND resolution emphasized a shift from combustion vehicles towards low-carbon public transit and replacement of air travel with high-speed trains.

Thirdly, the GND resolution emphasized electrification of transportation in general, not only cars.

Fourthly, the GND resolution called for major investments in residential energy reduction. The assumption that Ocasio-Cortez does not understand that de-sprawlification is an essential part of this is absurd.

And, finally, the GND resolution called for a major jobs program that would build community resiliency. In the environmental justice movement “resiliency” is understood to mean neighborhoods with proximity to resources, amenities, and jobs.

One of the reasons I have little interest in the latest wave of Comic/Superhero movies is that all the Villains seem so lame and unrealistic. But I could really get behind it if the Next Avengers movie or what have you took on these Road Diet Deniers as the main evil villain. It would be good to see the comic book screen hero’s deal some justice to this bunch of miscreants. They seem so rotten that they are almost like cartoon characters.

9watts
“how should we go about limiting/eliminating growth?”Thanks for asking.First we need to acknowledge that growth is a key problem, that underlies and exacerbates most of our most pressing threats. Next we should put our heads together about which aspects of growth we may agree are detrimental, and how, collectively, to tackle them. Some obvious high level strategies: removing subsidies to growth (growth in material throughput, consumption, population, fossil fuels, etc.) Ecological tax reform, not a new proposal, would shift taxes from the stuff we like (labor, property) onto the stuff we need to stop burning or buying (fossil fuels, etc.).There are tons more ideas, but first we need to unlearn the growth is good, or necessary, or unavoidable and recognize that it is killing us.lots more to learn right here from (a now defunct group) Alternatives to Growth Oregon: agoregon.orgRecommended 0

That seems like an argument for what sort of technological advancements need to be made, and lifestyle changes that need to go into place to me. Not an edict to stop growing. Though I afford you the human dignity of your own opinion and always will. I firmly believe we can work toward a better world, and that the point of no return, is, while close, not yet arrived.

From Planning for Who?

>>> our focus groups’ ideal bike system was a wide two-way cycle track with freshly painted lines and bike stencils plus arrows, free of oil or litter. Conditions around the route also mattered. Our groups perceived areas with clean signs, cafes with tables and flowers, balconies, streetlights and no alleyways or cuts between buildings as safest. They also wanted routes to avoid buildings that resembled housing projects, warehouses and abandoned buildings.

For crash safety, participants preferred cycle tracks separated from cars by physical dividers; wide cycle track surfaces, colored red to designate them as space for bicyclists; and bike stencils and directional arrows on the tracks. In their view, the safest locations for bike facilities had traffic signals for bikers, clearly painted lines, low levels of traffic, and did not run near bus stops or intersections where many streets converged.<<<

Is this actually different from what white people want?

The only difference I saw was a preference for riding on main streets vs. potentially less safe (from a crime standpoint) residential side streets. Yet advocates in Portland, of all colors, want facilities on main streets, too. It's where the destinations are, after all.

I'm not so sure I'm buying the "we want different things" narrative. I think everyone wants good, safe facilities.

Those interested in black female road cyclists should follow Ayesha McGowan, aka http://aquickbrownfox.com. Not sure if that’s her, but she is sponsored by SRAM.

Pete
Those interested in black female road cyclists should follow Ayesha McGowan, aka http://aquickbrownfox.com. Not sure if that’s her, but she is sponsored by SRAM.Recommended 1

“25-year-old Yewande Adesida is a self-described “up-and-coming amateur” track racer who hails from London. A former competitive rower, she graduated from university two years ago, and is currently seeking her PhD, studying wearable technology related to the biomechanics of rowing. Despite only switching to cycling a handful of years ago, she’s quickly moved up in the British amateur category system and has racked up some solid results, including a top-ten in the keirin at the national championships a couple of weeks ago to go along with her bronze medal at the collegiate national championships in the individual sprint this past December.”…

…”And so people started to take notice, including SRAM road brand manager Kate Powlison. Powlison says she was looking for people of color who would be a good fit for the project, and prominent cycling activist Ayesha McGowan put her in touch with Adesida, as well as Marty Merritt, whose images will appear at a future date in the marketing campaign.”

FWIW, I’m happy to see a woman behind the campaign and is SRAM road brand manager too. Also I hope this was a good reaction, but I saw the spots last week and my takeaway was just that all the riders looked like real-life athletes and the only color that stood out to me was the bright teal camo Specialized Tarmac.

Salem’s City Council today finally voted 6:3 to kill the Third Bridge…. after 13 years of courageous and tireless opposition by some great folks down here.

This human overpopulation thing appears to be self correcting. Millennials aren’t breeding. China is worried about its low birth rate. New and deadly diseases are on the rise thanks to the anti-vaccination movement and overuse of antibiotics. Poor health and lack of health care has reduced America’s life span to lowest in the industrialized world. Then there’s worldwide climate change and insect die off. Mother Nature knows how to handle overpopulations. let her do her job.

Wow, 616 YouTube comments, almost all of them utterly bashing Portland, but only *one* hating on bicycles… progress(?)! https://www.youtube.com/watch?v=-ZTcpIVxuHg

This feels like a mistake. Every additional ton of carbon or methane put in the atmosphere will be there for a long time, frustrating some future path to a more stable climate. Every car purchased or lane mile of pavement built is a sunk cost that folks will fall in love with,digging in their heels against change while options evaporate. Today we have a set of choices about what to do to reach a feasible set of outcomes. It’s not a path that we can turn around and walk back on. It’s a multidimensional space and every hour, every day, every election cycle, more of that space becomes unavailable. Point of no return? Would that be when Oregon tries to wall off California? Or maybe when I look outside and see Don Johnson with a big dog?