It’s taken years of complaints but it seems we’ve finally the attention of city officials on a recurring bike lane safety issue that might have a malicious origin.


The case of nails being strewn in the bike lane on North Interstate Avenue has gone unsolved for years. Now the police and a city commissioner are on the case.

We first reported about this in March 2017, but that wasn’t when the problem started. A quick search of Twitter posts shows that complaints go back to 2012. Someone tagged the Portland Bureau of Transportation with a complaint about it in September 2016 (who then forwarded it to the maintenance department).

After the most recent frustrating flare-up in flats, we heard from a staffer in PBOT Commissioner Chloe Eudaly’s office. Margaux Weeke wanted us to know the issue was on their radar and that they’d reached out to PBOT and the Portland Police Bureau to ask about how/if it was being managed. “The problem isn’t falling on deaf ears,” Weeke promised.

After the holiday break we got an update from Weeke. She said PPB officers had been cycling on Interstate to get a closer look at the two-mile stretch between Lloyd and Greeley where the nails most commonly appear. Weeke forwarded comments from the PPB about their findings. “At first we thought it was maybe construction debris,” they wrote, “but at this point it seems to be a deliberate act.”

Notes from the PPB investigation also say days and times the nails appear are random and that they’ve noted a variety of types including roofing and framing nails.

Their investigation into this issue is still in progress and hasn’t yielded major clues at this point.

While the problem still isn’t solved, it’s good to know that at least City Hall, the PPB, and PBOT are working together on this. We’ll keep you posted if they make any breakthroughs. In the meantime, please tag us on Twitter if you find any nails.

is there a non-twitter way to report this?

You can call PBOT at 503-823-SAFE or use an online submission form ( https://www.portlandoregon.gov/transportation/article/319727 ).

If you are calling about an immediate hazard, such as nails, broken glass or downed tree limbs in the lane, I’d suggest PBOT’s 24-hour maintenance line: 503-823-1700.

For something requiring a longer-term fix (speeding on your local street, etc.), 823-SAFE, safe@portlandoregon.gov or the link in Alan’s comment are the way to go.

The pdxreporter.org “debris in roadway” tool lets you report with GPS location (or just type in the cross streets) and typically gets a pretty quick turnaround. Make sure to say which side of the street or north/southbound.

I travel this chunk of interstate everyday, and the placement of these nails is not an accident. Whoever is doing this does not really understand bikes because these nails are a hazard but a little too big to be effective in giving cyclists flats. Within a short time most of them end up in the travel lane on interstate because the bike lane is so narrow and wind swept, so the perpetrator is mostly giving flats to his/her fellow auto-zombies. These nails are a perfect size to give flats to cars.

Yep – exactly this. I don’t know how many times I have stopped to pick them up and have thought the exact same thing. Stupid is as stupid does.

I came across a bunch of nails in this stretch in the middle of last year (I stopped and picked them all up, of course.) I considered that it might be intentional because they were mostly in the bike lane but, as you noted, they are pretty ineffectual against bike tires so I decided they just fell off a truck. I had no idea it was an ongoing thing! People are the worst!

No no no! Gosh, I hope the phantom nailer isn’t lurking in this forum because those nails are far to small to present a hazard to cyclists. To really do damage to a bike, they would need to use something like these bike killing nails: 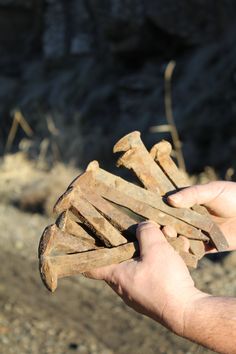 I hope the phantom nailer doesn’t find out and use these. Or we’ll all be sad.

I have my own large collection of these nails from years of riding on Interstate and I think I’ve got 2 flats from these nails. They are big enough to see and mostly avoid but just one more hazard to constantly be on the lookout for.

I greatly appreciate all of your efforts to keep our bike lanes clear. If it’s something dangerous and hard to pick up like auto glass from a collision, you can use one of Portland’s best kept secrets: The street sweep dispatch 24h phone number.

I’ve used this many times, and they’re exceptionally helpful. Yeah, it’s a phone call, but it takes 20 seconds and you get to talk to a human being.

Pretty narcissistic to think these meant specifically for cyclists.

Middle of the Road Guy
Reply to  Lester Burnham

Correct. When I want to flatten the tires of ambulances (just for the lulz), I put nails in the bike lane instead of the actual road.

Perhaps nails can become “fingerprinted” – small barcodes imprinted on them so police can find out where the nails were purchased, and by whom.

Gary B
Reply to  Fred

Why not microchips in each nail?

This is ridiculous. A $15 tax at purchase is clearly the more holistic solution.

Middle of The Road Guy
Reply to  Fred

I feel the same way about black hoods. Maybe we can find out just exactly who the ANTIFA and Anarchist terrorists are.

CaptainKarma
Reply to  Middle of The Road Guy

My money is on some rogue employee of Clow Roofing, who would have easy access to an endless supply of brand new roofing nails, and works for a business which is located right off N Interstate at N Tillamook and Kerby; I’ve found the nails right at the corner of N Interstate and Tillamook, they were like a trail of breadcrumbs leading right to this business.

glad to see some action on this. I ride the route everyday and I’ve mostly been finding them to the south of Spirit of 77. I had a 3 week stretch where once a week there would be a new cluster, only in that block though. I reported each to PBOT and they were promptly cleaned up! I haven’t seen them yet this year. I was thinking about self funding an investigation, maybe some game cameras… though they’d get triggered a lot based on the amount of traffic.

It’s heartening that city hall is actually paying attention to this kind of thing, now.

I had my own conspiracy theory about a section of my commute that I would find nails and staples on. Years later, I just came to the conclusion that it’s PHYSICS. Thanks a lot physics, chemistry never did this to me.

The section is on an incline where unsecured cargo rolls off the back of trucks as they drive up the hill and traffic works debris into the bike lane. Nails and staples are small enough to fit through the crack between the bed and tailgate. I never find similar debris on the opposite side of the street going down hill.

Fortunately, this section gets frequent attention from the street sweeper so these typically disappear in a week or two and being an uphill section, I’m going slow enough to notice and navigate around the hazards.

Actually, there might well be a natural explanation. That area is well know as one of the places where the Oregon Vortex can spill out of the crust due to either direct or offset internal squeezing, creating periods of concentrically inverting high magnetic anomaly that could be attracting loose nails from the back of trucks, which, due to the eccentricty/concentricity, would create patterns that appear deliberate. This can be deceptive in the same way in which crop circles can appear to be constructed by human hands.

The effect is usually short-lived, but if a contractor’s vehicle had loose nails in the bed, and entered the area during an outburst of high or oblique internal vortex squeezing, it could account for what we’re seeing. Hard to know for sure, though. If Eudaly really wants to get to the bottom of this, I’d suggest her office consult with a physicist.

I had always assumed that just as sidewalks generated telephone poles, asphalt was where nails came from, you know, organically. But you say it’s physics and not biology?

Yep and “places you’re not looking” spontaneously generate cyclists too. That’s why “He came out of nowhere!”