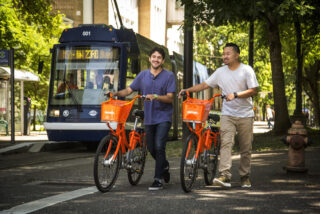 Starting this Thursday, Portland State University students can use Biketown for free.

The partnership is part of a new agreement to cement the downtown campus as the cycling epicenter of Portland. PSU says the program will be paid for via auto parking revenue.

It’s a natural step for the campus that serves nearly 30,000 students and is one of only five colleges in the county that has earned a Platinum Bicycle Friendly University award from the League of American Bicyclists.

Last May, Biketown expanded service at PSU by making it a “super hub zone” where people can park bikes on any available rack without incurring a fee. At a meeting of the City of Portland Bicycle Advisory Committee last night, Bureau of Transporation Bike Share Program Manager Steve Hoyt-McBeth said usage rates at PSU have been “bezonkers” ever since. PSU is also
Under the new agreement, students can take unlimited trips and get up to 90 minutes of Biketown usage at no charge. The offer is available to any current student with a valid @pdx.edu email address. PSU staff and faculty can already get a discounted Biketown membership for $7 a month (with an annual commitment).

The PSU partnership comes after Biketown offered free rides to all users during the month of May. That experiment was wildly successful. The system broke its one-day trip record nine times and it added over 11,000 local first-time users. It begs the question: Why not make Biketown free for everyone, all-the-time?

Asked that question last night, Hoyt-McBeth said it’s an idea worthy of consideration. He estimated it cost them an extra $50,000 to make the system free during the month of May and the promotion was supported by Biketown’s operator, Motivate. That’s important because Portland City Council has made it clear that bike share cannot use public funds for operations. Hoyt-McBeth seemed open to the idea nevertheless. “It’s money that would have to come from somewhere,” he said. “Biketown is under strict direction from City Council to not use local funds, so it would require a change in the ordinance.”

PSU and Biketown will announce their partnership at a press conference tomorrow (July 12th) at 10:00 am at the PSU Urban Plaza.

How is this new contract/program being funded? The report is very unclear. How is the nonprofit paying for its maintenance, services and personnel if the students aren’t paying? Is the university paying a subsidy?

Clearly this program is response to the coming of dockless bike share to Portland, a “last gasp” of the existing system.

I have some of those same questions.

We are funding this from within our transportation budget which is derived from automobile parking. Could you clarify what you mean about the nonprofit and maintenance? Are you referring to Motivate or PSU?

I can imagine this have lots of social and health benefits for the PSU community. But if free bike share also took pressure of PSU’s car parking, it might pencil out in plain financial terms. Has PSU examined the cost/benefit of this? Does it plan to evaluate it?

Holistically yes, our bicycle program in general reduces the demand for building additional parking (which never pencils out financially) but we did not evaluate this program specifically. For us it is about providing students with options and this is a low cost way for us to provide another way to get around town.

Clint, the myth that I keep getting from folks on this blog is that Portland bikeshare is a nonprofit funded entirely without city money. What you seem to be saying, and correct me if I’m wrong, is that not only is bikeshare funded with city parking revenue, a long-standing public revenue stream, but that the space bikeshare racks take up even reduces that revenue? And further that the funding being used to subsidize the bike share program can no longer be used to fund badly-needed new bike infrastructure as it once did?

Biketown is run by a for-profit company called Motivate who was just purchased by Lyft (the rideshare company). Biketown cannot use City funds to run the bike share program and relies on sponsorships from the likes of Nike and Kaiser. This program will use PSU parking money to subsidize the cost of the free service to students.

Even if free they considered Biketown for everyone was considered too ambitious, what about integrating it with TriMet (via HOP cards.) This would make the bike share program more attractive as a “first mile / last mile” solution.

I’m just spitballin’ the options that ARE available. Shouldn’t we all?

Free as in the students will pay for it in their quarterly ‘incidental fees.’

As mentioned above, this is funded from PSU parking revenue, not student fees.