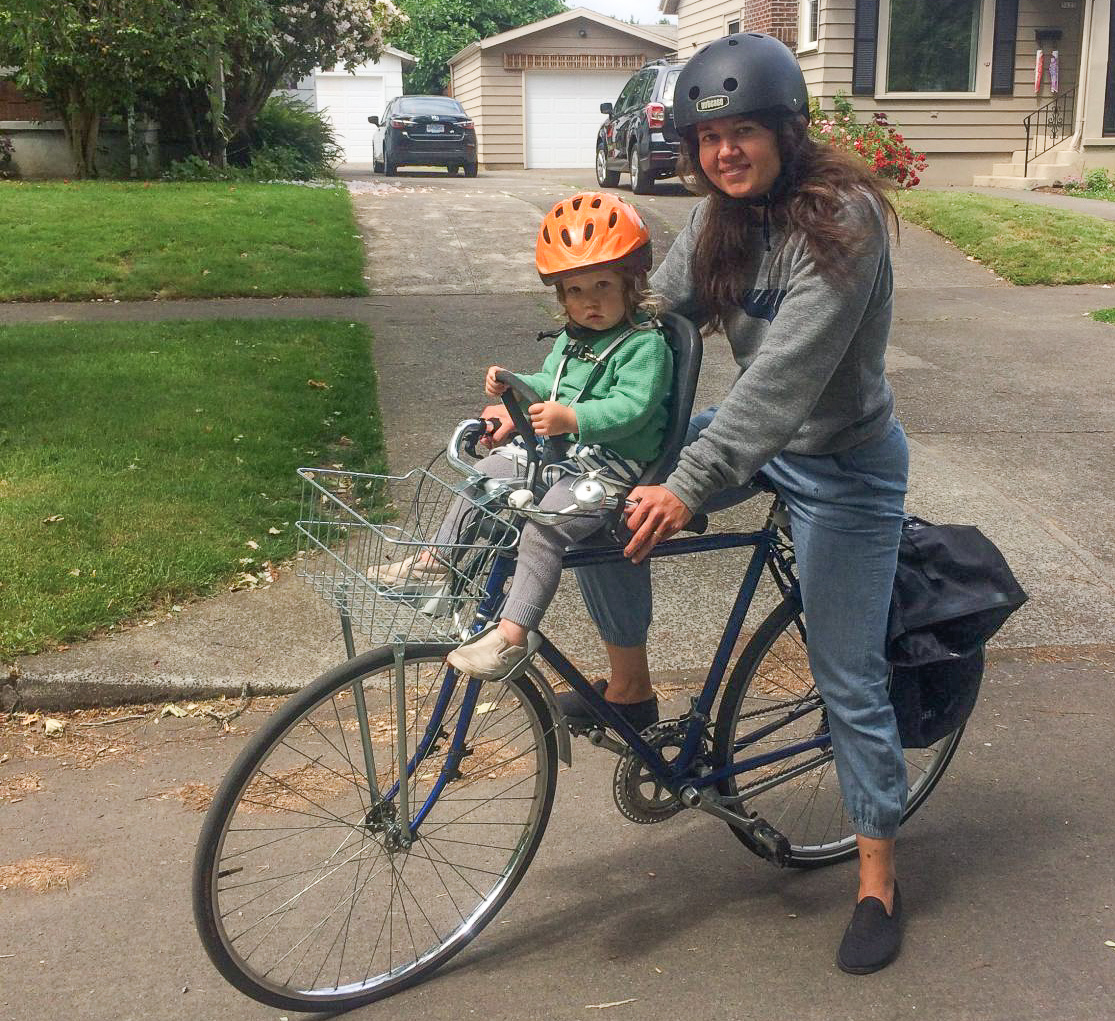 This week on the column we’re going to share a profile of one of our readers.

You may remember Ali Reis from the “Ride Along” post Jonathan did with her three years ago. Fast-forward three years to Ali with a two-and-a-half-year-old daughter and a different commute.

➤ Tell me a little about yourself and your family.

I am a 33-year-old social worker; originally from the suburbs of NYC, I have lived in Portland for about 10 years. My husband Colin, and my daughter Lark and I live in the Overlook neighborhood. Colin was diagnosed with terminal cancer about 18 months ago, so it is just Lark and me on bikes these days. Hopefully, he will be feeling well enough to hop back on in the near future. 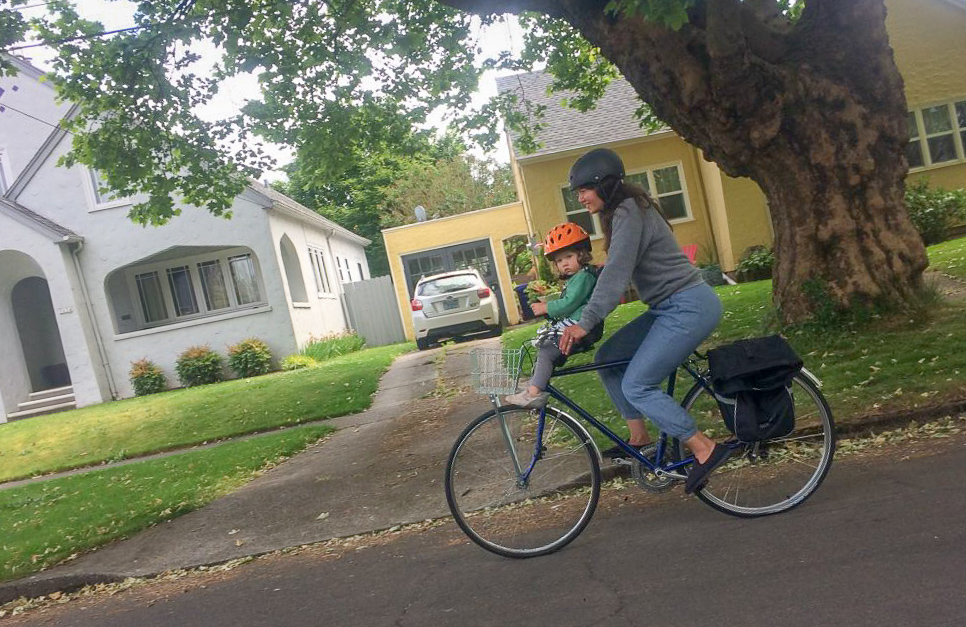 Lark has the best seat in the house in her Yepp mini.

➤ Tell me about your bike.

My primary bike is an Asahi, which I bought on Craigslist 10 years ago in Portland. It is a vintage road bike with upright handlebars. It came to NYC with me when I moved there for grad school and then back again when we came back. It was stolen out of my backyard in 2011 and I actually found it on the street! For a long time, I was using a Redline MetroSport, since I had a long commute, but the Asahi is perfect for cruising around town with Lark on the bike seat. She uses a Yepp mini on the front handlebars. I was sure I would hate using it when we first got it, but I love it! We also have a Burley trailer which we started using when Lark was 4 months old with an insert. The trailer is great, but it is a lot more work to take on and off, especially with school drop off and pick-up. The seat is wonderful as it comes off quickly and I leave it at Lark’s school during the day. I love having her close to me; we sing and talk (or sometimes she just sings and talks) whenever we ride. I happen to be hearing impaired, so it is especially nice to have her so close so I can hear her. Eventually we will have to move to a seat on the back of the bike, but hopefully not for a little while.

➤ Is there something you wish you had known before you took your first pedal stroke as a family biker that would have made things easier?

I don’t think so! I’ve always wanted to bike as a family, so I didn’t have too many apprehensions.

➤ Tell me about a typical ride you take in Portland.

I bike Lark to and from school each day, which is a lot of zigzagging, all on streets without bike lanes. We live near Killingsworth and Denver and her school is near Williams and Fremont. On the way home, we take Williams and Ainsworth. It’s only 2.5 miles (and then another mile to work), so it’s completely doable and easy for me. I work for Multnomah County and do assessments in peoples’ homes, so I ride all around N/NE Portland on my bike. One of my favorite rides is taking Alameda; it is just a pleasant street with hardly any car traffic.

➤ If there was one piece of bike infrastructure (street, intersection, bike rack, etc) you use regularly that you could change to improve your life, what would it be?

I would have a million answers to this question when Lark went to a different, farther away day care or when I worked at my old job in SW Portland! I would love to see bike/pedestrian only bike streets. I feel that Going and Holman are good examples of streets where there is very little car traffic and I take these often. I find Williams/Vancouver to be a bit of a nightmare at times with so many cars, buses and bikes at once. When Lark and I were biking home last week, someone tried to turn the wrong way onto Williams! 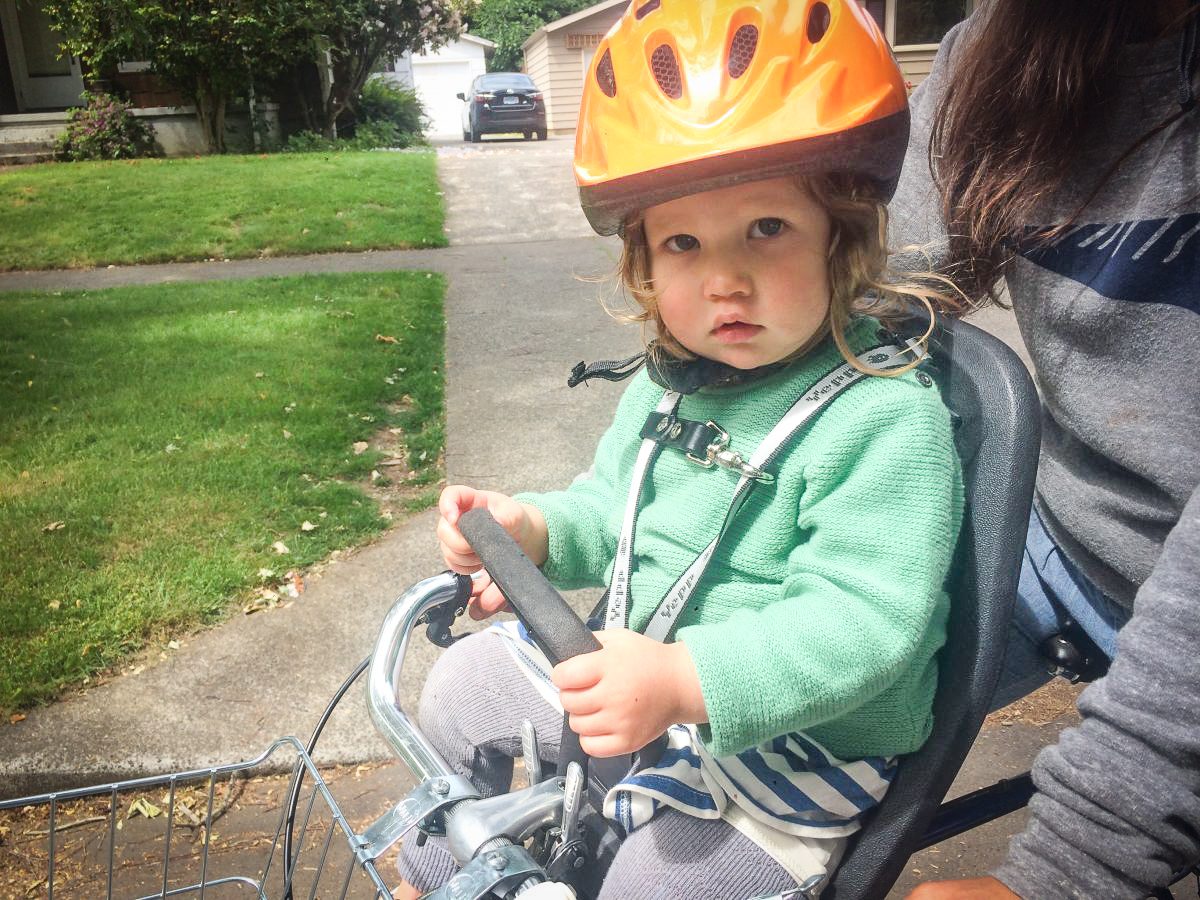 I love the chest strap Ali made for Lark’s Yepp seat. My own similar-but-much-less-attractive DIY closure was done with an old helmet chin strap.

➤ Have you biked in other cities and how did it compare?

Colin and I biked the entire two years we lived in Brooklyn. I went to school in Manhattan, so I biked over a bridge to get there. (I also took the subway a bunch, especially during the winter). NYC biking, in 2009-2011, anyway, is so different from Portland biking. When we moved back to Portland after 2 years in NYC, I was shocked that people did things like wait for red lights and pretty much always follow the rules of traffic. There’s pretty good infrastructure in NY for bikers, but I remember being on high alert every time I biked. There are always people walking into traffic, cars opening their doors, cabs pulling into the bike lanes, cars honking, etc. But it was pretty exhilarating, too. It’s hard to say if I would feel safe biking with a small child there; I don’t think I would do as much biking with Lark there as I do here.

➤ What’s your best piece of advice to pass along to BikePortland readers?

I bike for a lot of reasons, but the number one reason is for improved quality of life. I know there are many people who think I’m nuts to bike around town with a kid (less so as she gets older, but my mom definitely did not approve when Lark was 4 months old!), but the alternative of driving everywhere doesn’t feel like an option for me. I love being outside, able to get exercise and not have to sit in traffic to get where I want to go. And there are always parking spots! Lark went through a phase where she was really upset about having to get on the bike, but she has gotten past that and seems to really enjoy it now. She still doesn’t love wearing a helmet, but overall she is happy to ride. She has her own balance bike which she is just starting to get into, so I’m hopeful that biking as a passenger will only encourage her to ride her own one day, too.

Thank you for sharing your story Ali!

And thanks to you all for reading. We’re always looking for people to profile. Get in touch if it sounds like fun to you. And as always, feel free ask questions in the comments below or email me your story ideas and insights at madidotcom [at] gmail [dot] com.

Get this and other BikePortland posts delivered directly to your inbox.

I’d say there is a very good chance that Lark turns into a life-long cyclist from her upbringing on a bike. I see that all the time in Portland- kids just assume that they get around by bike instead of being driven everywhere. Thanks to all of you biking parents for helping create the next generation of cyclists.

I loved reading that Lark is already on a balance bike and will soon transition to a pedal bike!

I love this! Ride-alongs and profile posts are my favorite. My husband and I have lived car-free in Chicago and Seattle, and it’s always so fun and interesting to hear other people’s perspectives about their bike commutes.