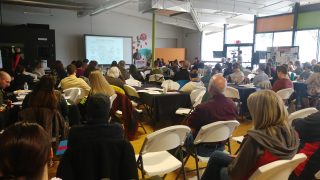 The event brought in experts to explain how it all works.
(Photo: Sarah Iannarone)

This story was written by Portlander Jim Labbe, a co-organizer of the event.

Last Saturday over 100 people from around the region gathered at the Rosewood Initiative in East Portland for an event that could have significant implications for government budgeting in the region — including the allocation of transportation funds.

The one day, “Community Forum: Bringing Participatory Budgeting to the Portland Region” brought together diverse community leaders, elected officials, and local government staff to learn about participatory budgeting (PB) and explore its implementation in the region.

A critical first step is a decision by elected officials to share real power over real money with their constituents.

Participatory budgeting started in Brazil in the late-1980s and has since spread to over 3,000 municipalities worldwide including dozens in the United States (beginning with a Chicago ward in 2009). In the last 3 years PB has launched in Seattle and Victoria with Vancouver BC and Tacoma planning PB projects for 2018. While PB varies around the world, a common feature is a binding community vote on publically-funded projects brainstormed by the community and developed by volunteer budget delegates working with local government staff.

A critical first step is a decision by elected officials to share real power over real money with their constituents.

Until recently, no elected official had suggested trying PB in Oregon. But in a March 2016 mayoral debate, then candidate Ted Wheeler, proposed bringing “New York City’s style” of participatory budgeting to Portland. The proposal barely got notice at the time. But in early 2017 a small group of people from Portland and Gresham began an organizing effort that led to Saturday’s event. 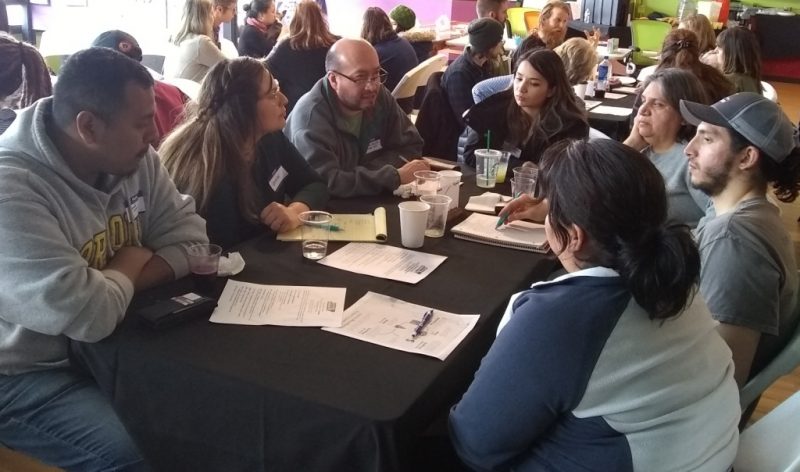 Over lunch and into the afternoon, Forum participants broke into groups to share ideas and deliberate on bringing PB to the Portland region. Afternoon conversation groups covered numerous topics including, “Equity in PB design & outreach,” “PB in Schools/for Youth,” “PB for Parks & Greenspaces,” and “PB for Transportation Funds.”

“I’m curious how devolving some funding decisions to the community level might shift transportation resources toward smaller, more diffuse and human scale projects that improve safety and mobility for the many — rather than mega-projects heavily promoted by a few and influential parties.”
— Jeff Mandel

North Portland resident Jeff Mandel attended with a particular interest in how this new way of allocating resources might be applied to transportation funding. Asked about his involvement, Mandel said, “I’m curious how devolving some funding decisions to the community level might shift transportation resources toward smaller, more diffuse and human scale projects that improve safety and mobility for the many — rather than mega-projects heavily promoted by a few and influential parties.”

And Sarah Iannarone, a former candidate for Portland mayor, was also there. “Budgets are the cornerstones of democratic policymaking, yet their processes are often confusing and exclusionary, informed as much by backroom dealing as public input,” she shared with BikePortland via email today. “I could see us piloting the process in a major transportation project/bond measure or even using it to develop a robust regional mobility equity plan including everything from decongestion pricing to town center parking policies. We have the techniques for civic engagement and the technology to support us, all we really lack is the political will.”

The afternoon also included real-time voting on how and where to first bring participatory budgeting to the region. Participants favored starting participatory budgeting with students or youth and using available discretionary funds at the neighborhood or city-level. Most favored goals related to equity and social justice as well as making public participation more meaningful and accessible to foster new leaders.

The forum was organized by volunteers, hosted by local-nonprofits Healthy Democracy and the Rosewood Initiative, and funded by the City of Portland, Oregon Community Foundation, City of Gresham, Metro and Multnomah County.

If you’re interested in next steps and want to learn more, visit HealthyDemocracy.org.

It’s pretty obvious that the commissioners’ have a “keep your hands off my bureaus and I’ll keep mine off of yours” attitude. No commissioner is keeping an eye out for what’s good for the city as a whole. That’s how we end up with a water bureau building that was 3x the original budget and spokespeople for every bureau, just to name a couple examples.

Commissioner form of gov’t needs to change, it is outdated and racist, outlawed by southern courts for years now, and dominated by rich, white business interests. Portland needs electoral districts with more seats at the table, and a different form of management for Bureaus and services.

Nope, I’m just saying it used to be even worse. Google it, Commissioner form of gov’t has its roots in post-Civil War South Jim Crow era. During Civil Rights era in 1950-60’s, courts all over the south forced cities to eliminate this form of municipal government structure on grounds of bias.

Given Portland’s racial history, it’s not surprising to see this city, against all odds, still clinging to this form of outdated racist municipal government. There’s been exactly one Black commissioner in all of the 31 years I’ve been here, and I believe he had ‘establishment approval’. And IIRC, there have been no Asian or other cultural groups represented at all.

Jordan left city council in 1984, before my time.

Here in Greensboro we’ve had two rounds of PB so far, re-allocating only about 1% of the overall city budget. Through the PB process, you learn that the form of city governance you have doesn’t really matter very much, but rather who actually runs your city (your bureaucracy) and how well they get along with each other between bureaus and departments – in other words, the basic dysfunctionality of your city. And all governments are dysfunctional to some extent or another. That dysfunctionality is then exposed to a greater number of people, not just you 5 city councilors, greatly expanding the number of people involved with project design and decision-making.

FYI, Jamal Fox was the youngest Greensboro City Councilor when he has first elected, in over 100 years (Greensboro was founded in 1808, but settled in the 1750s). He represented District 2, one of 2 districts are over 80% black. (We have 5 districts, 2 of which are over 70% white, plus 3 other councilors and a voting mayor who are elected at-large; all are part-time and paid less than $20,000/yr. Jamal was a professor at NC A&T University as his day job.) I think he now works for the City of Portland.

Sorry for the typo, “…your 5 city councilors.”

Yes Jamal lives in Portland now, works for Portland Parks, and serves on the Oregon Commission on Black Affairs. We are lucky to have him.

You are lucky – we really miss him.

Here’s his presentation at the forum:

Edited video for the entire Forum is now online here: