Sunday Parkways will return to downtown in 2018 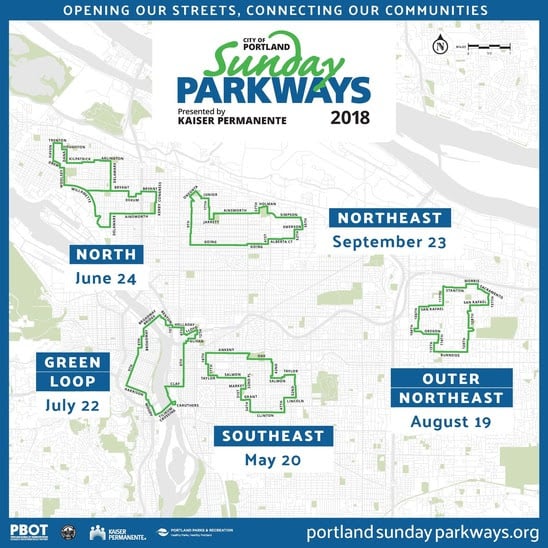 The first real-life test of the future Green Loop.

It’s official: For the first time since 2012 Portland’s Sunday Parkways event will happen on the west side of the Willamette River.


The Portland Bureau of Transportation announced this year’s five events today and the big news is that the July 22nd event will follow the route of the proposed Green Loop project. “Our new Green Loop route is going to be a wonderful way to introduce Portlanders to biking to some of the most well-loved parts of our city,” PBOT Director Leah Treat said in a statement. “I can’t wait to show my kids how much fun it is to ride to Downtown and the Central Eastside.”

Parkways will start with a May 20th event in southeast Portland, followed monthly by an event in north Porltand on June 24th, then the Green Loop July 22nd, outer northeast on August 19th, and the season will wrap-up with a northeast loop on September 23rd. 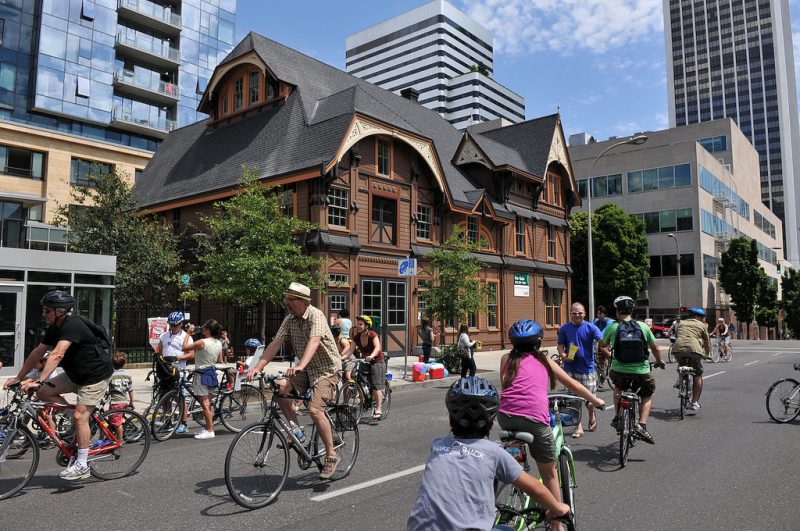 The last time the City of Portland held a Parkways route in the main part of downtown was in 2011 (they did a northwest loop in 2010).

The City calls the downtown event their “most abmitious route to date.” Unfortunately they aren’t sharing the route yet because it’s still in planning stages. However, PBOT gives us some clues in today’s announcement, saying the route, “includes the North and South Park Blocks on the west side and SE 6th Avenue on the east side.”

From the map released today, you can make out most of the streets. The route uses the Broadway Bridge, then heads north-south via the Park Blocks (crossing Burnside should be interesting) all the way to Harrison. Then it heads across the river via Moody and the Tilikum Crossing Bridge before looping around SE Caruthers and then Water Avenue near OMSI. It will then use Clay to 6th before working its way to NE 12th Avenue to cross I-84 and then through the Lloyd via Lloyd Avenue, 7th. The route then appears to use NE Holladay to get to the Rose Quarter Transit Center before snaking around the Moda Center via Benton and back to the Broadway Bridge.

After the 2010 event we heard through the grapevine that it wasn’t repeated because some influential downtown retailers squawked about a loss of business. This time around PBOT says, “Dozens of businesses and apartment buildings have already expressed their excitement about being a part of the newest Sunday Parkways route.”

Sunday Parkways isn’t just fun and games. It’s also a pillar of the City’s transportation marketing efforts. A survey of Parkways attendees last year found that 15 percent of respondents said they’re more likely to bike to work because of their experience at the event.

Learn more about Sunday Parkways in our archives or via the PBOT’s website.

First time since 2014 that Sunday Parkways will be west of the Willamette River. wow.

Just barely, and only partially.

This comes up everytime in a Sunday Parkways post.

I suggest taking part in Bike Beaverton for the west side fanatics (I’m one):
https://www.beavertonoregon.gov/1804/Bike-Beaverton

Parties are fun and all, but if this is a major part of what the city is doing to get people on bikes, I think it’s time to look at something else. If we saw no growth for a couple of years, one could infer external factors and push on with a wary eye, but this has been a solid decade of focusing on party-type events and seeing cycling stagnate.

I suppose it could be worse. Portland could be like its little sister at the south end of the valley, Eugene, which has seen a dramatic decline in cycling since it started focusing on parties. In fact, it just hired two new party coordinators recently. They’re nice people, but I do not believe they will reverse the decline by doing more of the same thing.

I disagree with the characterization that Sunday Parkways is just a party. Beyond the chance for families to ride together without fear, is the incredibly important function of being a chance for ordinary people to experience and imagine a world without cars. Getting a vision of what “could be” is critical to more people unhitching themselves from the ox cart of happy motoring that has subjugated them for the last 120 years.

Correlation is not causation. It’s entirely possible that cycling rates would be even lower without Sunday Parkways. There are too many other, more influential variables (strength of the economy, oil prices, infrastructure progress, the bikelash) to know this for sure.

I am glad to see that they will be using 6th through the Central Eastside. With a bit of diversion, 6th could be an excellent street to bike on and serve destinations along Grand/MLK reasonably well.