At route reveal party, Cycle Oregon will look to roll past tumult of 2017 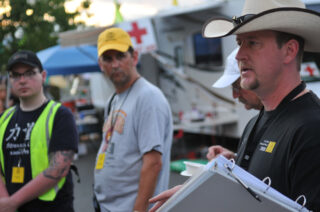 Tomorrow night Cycle Oregon will celebrate the 30th running of their week-long “Classic” ride. At least they hope it will run this year.

It’s Cycle Oregon’s 31st year in existence, but last year’s ride was cancelled at the last minute due to wildfires that ravaged several sections of the planned route. This year the nonprofit is back with lessons learned and hopes that their fans are willing to give them another shot.

They’ll get a chance to make their pitch for the 2018 ride at the annual Kickoff Party at the Portland Art Museum Wednesday night.


“I think at this point everybody is excited for the new year,” CO Executive Director Steve Schulz told me on the phone this morning. “A lot of things happening across the U.S. and the world have brought people down, and everyone’s ready to get there.”

As for last year, Schulz says the organization has thought long and hard about how it went down. Beyond the disappointment of the cancellation itself, they took heat from some riders for how they handled the refund process (they offered $500 in return, half the entry cost).

While they can’t predict what Mother Nature has in store, Schulz says they are going into 2018 with more contingency plans than ever. Don’t forget that the 2015 ride was also impacted by a forest fire — prompting the first-ever major re-route of the ride. With those experiences in their pocket, Cycle Oregon sounds like they’re prepared for anything.

“This year we have a ‘plan b’ and a ‘plan c’,” Schulz explained. Cycle Oregon staff has been busy in the off-season shoring up partnerships and plans with officials and communities beyond the main route. If something threatens the main route this year, they’ll aim to change plans much earlier, and they’ll have a different route all lined up and ready to implement.

“We have two solid contingency plans to work from, so we can jump around,” Schulz said, “We have options.”

Speaking of options, Cycle Oregon will unveil a brand new one tomorrow night. When they announced the dates of this year’s rides, they also announced a mystery event to be held in October. Schulz said there’s been a lot of buzz about what it could be.

People are also anxious to find out where the “Classic” ride will go this year. Will it be a re-try of last year’s route? The small towns it was supposed to pass through will certainly have their fingers crossed.

We’ll have to wait until tomorrow night’s party to find out. Stay tuned to BikePortland for all the details!

I wish Cycle Oregon the Best, and I am sure many devotees will be ready to sign up and prepare for this years ride. The hard part will be getting any of them to put down a deposit this year. But lets cross our fingers.

Maybe it will take a few days to sell out instead of a few hours?