How many feet of elevation do you climb each week? How many times do you ride per month?

These are the type of calculations that will weigh heavily on Paul LaCava’s mind for the next 11 months as he tries to accomplish his goal of 1,000,000 feet of vertical gain by December 31st. 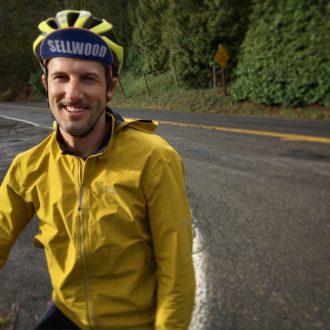 I met up with LaCava on Tuesday to see how we was doing and to share a few thousand feet toward his goal.

LaCava has lived in Portland for 18 years and moved here for a job after doing most of his growing up in Corvallis. He credits his dad, a marathon runner, for piquing his interest in endurance sports. When he’s not pedaling or skiing or running, LaCava stays busy as a sales rep for Giant Bicycles. For the past 10 years he’s been driving between bike shops in Oregon, Washington and Alaska.

Now 39 and with a decade in his current job, LaCava seems to be reflecting on where he’s at. That self-assessment is partly to blame for staking out such an audacious goal; but LaCava says the real story is that he just haphazardly decided to do it. “There’s no real secret agenda. No noble cause,” he told me during a pre-ride conversation at Breadwinner Cycles Cafe on North Williams Avenue. “It’s really selfish; but it’s a fun thing that hopefully won’t drive me too crazy in the next 11 months.” 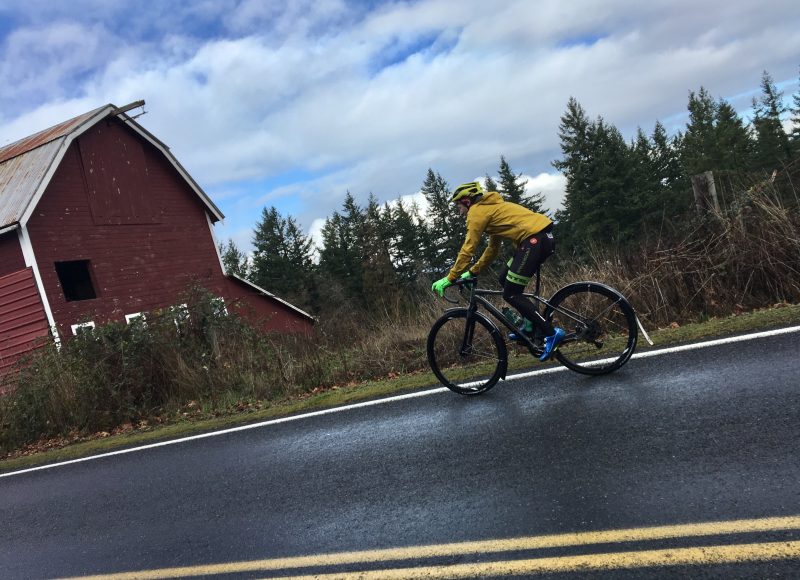 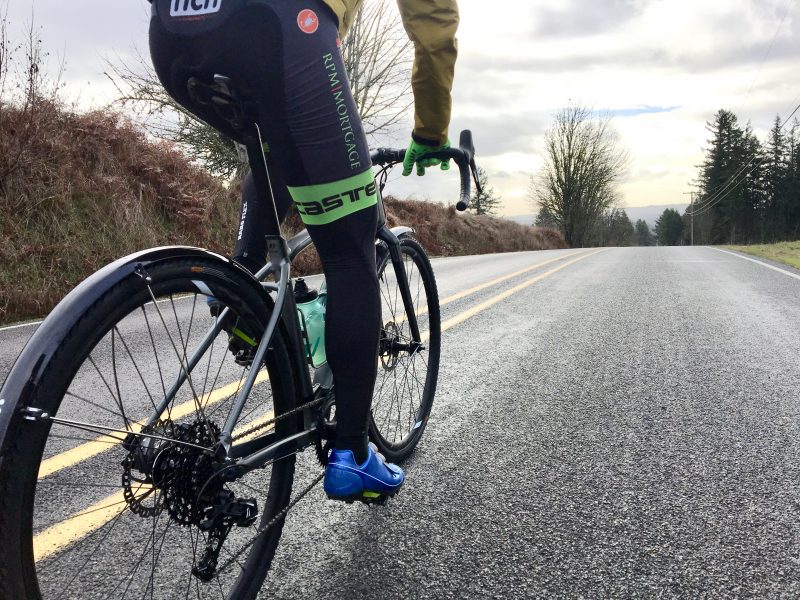 To reach 1 million feet of what he refers to as “vertical accomplishment,” LaCava figures he’ll need to average just over 2,700 feet per day. While he’s likely to do some backcountry skiing, the vast majority of the miles will be done on bicycles. In a typical year, LaCava’s bike computer stats show that he climbs about 500,000 feet — so even for a guy known for his endurance biking exploits, doubling that will be tough. 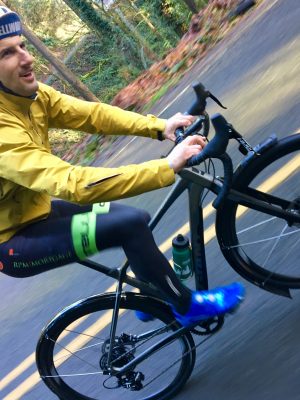 LaCava says he’ll make sure to always have a bike ready-to-go in his work van as he travels. He might pull off the freeway and do a quick ride in the middle of nowhere. When he’s home in southeast Portland he’ll have plenty of hills right outside his door. Some of his favorites are Mt. Scott, the backroads near Oregon City, and of course the reliable West Hills above downtown Portland.

To keep on the pace, LaCava will find motivation from many sources. He said skier Aaron Rice’s human-powered record of 2.5 million feet of elevation gain in one year was a major source of inspiration.

He’ll need all the inspiration he can find in order to not get behind on the numbers. “Every day I’ll try to fit in something,” he said. “That’s the challenge — when you take a day off, all the sudden the next day you have to do 4,000 or 5,000 feet and that’s a big ride… You can get behind it so fast and you’re suddenly off the pace.”

To keep on the pace, LaCava will have to make the most of every waking hour. His mind will constantly be chasing the numbers. “The time is there, you just have to do it. I can look at my phone and 10 minutes go by. Well, do that five times a day and that’s almost an hour. I can do 2,000 feet of climbing in an hour.”

He could just ride the De Ronde PDX route 136 times.

I think Devin Baily did that already

He can have ALL of mine.

Daily mark… and he talked about skis, so I don’t know why walking stairs would be any different other than time spent exercising to reach daily goal.

You could consider this a “rest day.”

Kyle Banerjee
Reply to  B. Carfree

If he’s out there most days and likes to ride weekends, I expect he’ll make it though his goal does make Everesting via repeats on Marquam Hill sound fun in comparison…

Note that all the pics in this story feature roads with no shoulders where cars probably go over 50mph on a regular basis. My guess is that Paul genuinely enjoys riding these areas and he’s not afraid of getting hit — probably because these are great areas to ride and it’s reasonably safe.

If the goal is to get more cyclists on the roads, I suspect more people will be inspired by the likes of Paul and others having a good time riding many miles on roads everywhere than stories of terror riding short distances at low speed on anything other than fully separated infrastructure.

I think he said there was no goal with this at all?

Good luck, Paul! If anyone can do it, you can!

sounds dumb to me.

I just now had a similar reaction when I read something

Makes my back hurt thinking about it… Good Luck LaCava!

Cool idea combining cycling and skiing although from what I can tell cycling is definitely the most efficient and most accessible way to rack up the elevation.

Out of curiosity I looked at Strava’s “climbing challenges” and in 2017 an old Italian Pro cyclist climbed over 3million feet. It appears he just did the same route almost everyday but averaging over 8k a day is amazing… especially at age 51, no matter his “training methods” during his Pro years in the 90’s.

There is no comparison between cycling and backcountry skiing in terms difficulty of elevation gain. On a bike, 5K is not that much, 10K is significant but attainable for a recreational rider in reasonable shape, and 15K requires a pretty fit and strong rider. On skis, 5K requires a fit and skilled skier and 10K is nuts.

Descending is way easier too. On skis, it’s a quad incinerating process requiring skill and strength that really jacks your HR. But it still is fun.

Skiers have climbed and descended 9000′ on Mt Rainier in under 4 hours. Run/hikers, bikers and skiers have all done over 30k’ in a day. Like anything it depends on the situation and conditions.

It’s been done, but all of these people and their accomplishments would be regarded as notable even within the extreme athlete communities and ideal conditions, and my basic assessment stands.

9K skimo is almost as much as going up Mt Hood, South Sister, or St Helens twice. 30K feet on a bike is from the river to Council Crest 30 times. Very few people have the strength, stamina, and skills to complete any of these things, let alone so quickly.

There is a comparison between the two: you look at what top athletes can do. The numbers are roughly the same. Cyclists might have a slight advantage over skiers or runners at racking up 5 or 10k’ climb and descent if they can find the perfect car free course but not a notably significant one. Hood has been lapped in under 2hrs on foot and under 1:30 on skis. Find me a cyclist that has put up 5250′ in 90 minutes. I’m sure it can be done but it’s not like they are killing the other modes.

Max cycling VAM is likely around 1600 for Pro climbers on long efforts required to gain this amount of elevation. 5250′ in 90 minutes is a VAM of 1066 (meters), which is doable for strong amateur cyclists… once or twice a ride, Paul could probably sustain that for a couple hours of repeats but it would be way to deep an effort for what he is attempting.

B. Carfree
Reply to  BradWagon

That stuff never wears off.

Training methods of the 90’s ? Oh yeah, everything was so backward then. I mean , it was the 20th century. I remember rolling the bike out of the cave, and loop loops around the dinos.

Ok, doing loops not looping loops. When I learned to write we used Latin and quills.

Drugs, I was talking about drugs.

Dang – that’s great. I got 250k in the last full year before I got sick. 4x that would be brutal.

Short of repeats the best I manage around town is 100 ft/mile.

Ten thousand miles is a feat on its own. Good luck!

A rider in California has ridden between 900k and 1million feet a year from 2013 to 2016 and he averaged 670ft per 10 miles (700 the year he hit 1million), 2hrs of riding a day and 19.5mph(!!). That puts perspective into what Paul is going after. This rider never specifically focused on riding just for elevation so Paul could definitely up the ft per 10miles to 1000/1200 planning hilly routes or maaaybe 1600/1800 if he focused on just repeating a specific hill. Either way average speed even for a strong rider like Paul is gonna drop and he’ll still be looking at 1.5/2 hours a day of climbing. Doable but he is so right about getting behind… even a couple days and it becomes incredibly hard to make that up.

GUY SHOULD GET AN EBIKE WOOD MAKE 1M ALOT EASIER