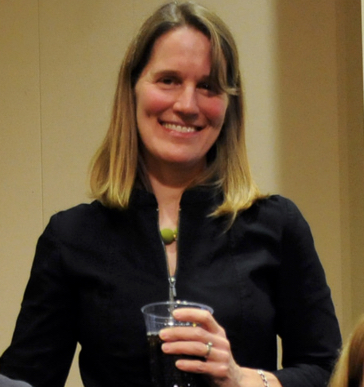 Ciarlo at the Oregon Active Transportation Summit back in February.
(Photo: J. Maus/BikePortland)

Catherine Ciarlo, a familiar name in Portland planning and transportation circles, has been chosen to lead a key division within the Portland Bureau of Transportation.

PBOT announced Friday afternoon that Ciarlo is the new Active Transportation and Safety (ATS) Division Manager. She takes over the position left vacant in October when former division manager Margi Bradway left PBOT for a job at Metro.

The ATS division is one of five division in PBOT’s Policy, Planning & Projects group and is responsible for many of the programs we cover frequently here on BikePortland including: Safe Routes to School, Vision Zero, Sunday Parkways, SmartTrips, and more.

In an email about the hire sent to PBOT staff on Friday, PBOT Director Leah Treat said, “Catherine brings the creative and collaborative leadership PBOT needs to continue to support and invest in active transportation and safe travel for everyone on our streets. Her background in transportation policymaking and innovation in the private and public sector is the perfect combination to continue the strong momentum PBOT has established in our citywide Vision Zero effort.”

Ciarlo has been a senior project manager at the consulting firm of CH2M Hill since 2012. That job has kept her very close to PBOT thanks to current and recent contracts to work on Vision Zero, Safe Routes to School, and Central City in Motion. Prior to her consulting work, she served as Portland Mayor Sam Adams’ transportation policy director. Ciarlo is also a former member of the Portland Planning Commission and she was the executive director of The Street Trust (then the Bicycle Transportation Alliance) from 1998 to 2005.


During her stint in the Mayor’s Office, Ciarlo helped guide policy on major initiatives like the Bicycle Master Plan Update, the Columbia River Crossing Project, and Portland Bike Share. In the video below from 2009, Ciarlo gave us an update on Mayor Adamss 100 Day Plan:

As a Planning Commissioner Ciarlo was against the CRC and once told us she would, “urge City Council to not to write a blank check for a project that doesn’t meet the criteria we believe any new bridge should meet.” However her tone changed a bit when she worked for Mayor Adams and she defended his stance on the project which many felt compromised too much.

Upon taking her position on the Planning Commission in 2007, Ciarlo said she wanted Portland to “head in the direction of environmental sustainability and transportation systems that truly serve people.”

Ciarlo, who officially starts at PBOT on February 15th, comes to the agency during a time of major transition. Cash-starved for decades, thanks to the new local gas tax (Fixing Our Streets Program), the statewide transportation package, and Mayor Ted Wheeler’s Build Portland program, PBOT now has significant funding to actually build infrastructure — instead of just planning for it.

One of the projects Ciarlo is probably looking forward to more than all the others is the carfree Flanders Crossing over I-405. It was Ciarlo, as head of the Bicycle Transportation Alliance 2002, who brokered a deal with City Hall to make NW Flanders a bicycle-priority street in exchange for not having bike facilities in the West Burnside/Couch couplet project. Ciarlo then testified in favor of a 2008 plan that would have reused the Sauvie Island Bridge as the Flanders crossing; but that project never moved forward. Now thanks to a State of Oregon grant, the Flanders Crossing is finally a reality.

And hopefully under Ciarlo’s leadership, we’ll soon have a new neighborhood greenway through the heart of northwest Portland from Waterfront Park to NW 23rd.

Welcome back into the fold Catherine. We look forward to working with you.

Recently, Portland has taken some baby steps towards making riding a bike a little less lousy by putting in a few of the many much-needed diverters. Other than that, it’s been pretty bleak for a very long time, and the ACS numbers back that up.

Watching that video of Ms Ciarlo, it’s easy to see where that long stretch of failure comes from. While I don’t think she’ll do much harm, I don’t see anything to give me hope that this is the right person at the right place at the right time. It looks like just another same-old, same-old friendly insider being rewarded for never rocking the boat. As is so often the case these days, I hope I’m wrong.

Catherine brings all the needed tools to this job. Congrats Catherine!

Lucky us great news and welcome back and thanks to Catherine for agreeing to take this on. Law background is so helpful in cutting through the static.

Congrats Catherine! Hopefully you can get Mikael Colville-Andersen to reverse his stance in short time. It will take a strong will to implement projects vs. the City’s recent tendency to talk about implementing projects. I hope you prove doubters wrong.

Found a stolen bike—how to identify?

Hey y’all. Someone hopped a fence into my backyard earlier today, and when I heard the ruckus and went to see what was going on, they hopped back and ran off. They left a… Read Post »

I’m selling two his/her Kahlkoff Ebikes. These probably have less than 200 miles on them. I bought them when we lived on hill with a 14% grade, we now live in flatland. Pro Connect… Read Post »