Tip your semi over on the sidewalk? No ticket! 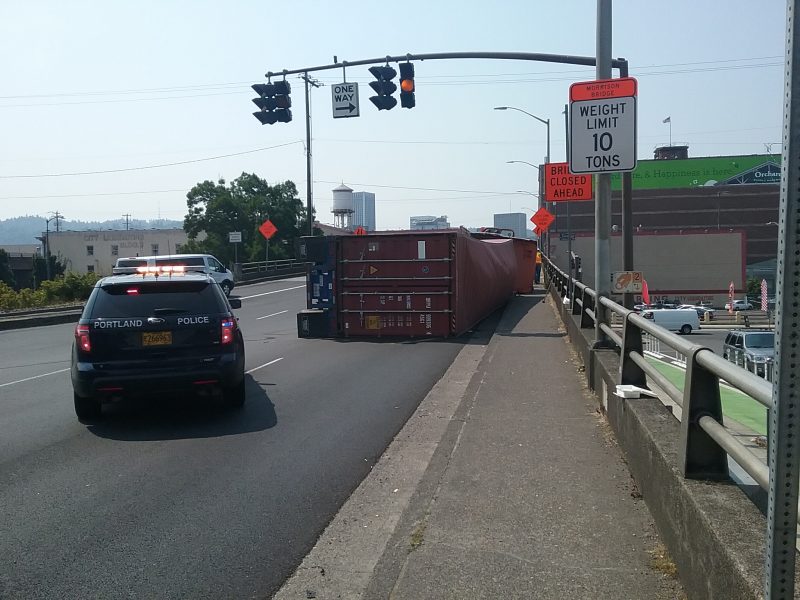 Semi trailer lies on its side, partly on sidewalk on Morrison bridge ramp.

Once again, a semi driver heading north on SE Grand has been going too fast, and missed the left turn onto the Morrison bridge ramp, tipping the vehicle over onto the bridge sidewalk. I’ve personally seen four of this type of crash at this location in the last decade. As far as I can tell, there hasn’t happened to be a pedestrian injured in any of these incidents.

The latest was on 8-7-17, about noon. I asked one of the Portland Police officers if the driver would be ticketed for reckless driving. He said, no, the driver is young, and just starting his career. “What purpose would it serve?” said the officer. “He’s already going to pay for the damage” “We can’t issue a ticket because we can’t find that he did this intentionally. He wasn’t DUII.” I asked if rolling your truck on a turn wasn’t evidence of reckless driving, or driving too fast. “He says a car cut him off. If we find a bicyclist under the trailer when we lift it up, then we’ll charge him”.

So there you have it. Tip a 40-ton vehicle onto the sidewalk? It’s not reckless driving. It is just, as the officer said, “an accident”.

“He says a car cut him off. If we find a bicyclist under the trailer when we lift it up, then we’ll charge him”

I actually believe that.

Probably they’ll charge him with recklessly taking the lane when the semi driver was rightfully turning nearby, riding without a helmet, wearing some non-reflective clothing, and dressing like Lance Armstrong.

don’t they have to yield to west-bound traffic?

He wouldn’t have been cut off by west-bound traffic. Rather it would be someone trying to slingshot around him before he got to the curve. I see people pull moves like that all the time.

I expect this will be problematic for his career anyway. Trucking companies know what is up.

Good trucking companies fire people who flip their rigs. Unfortunately, there are plenty of less than good trucking companies who hire these careless drivers and run them hard, often with ill-maintained equipment. Certain firms are notorious for this, like pretty much every firm that runs chip trucks in this state

Paul: I think he meant they’d charge the driver if they found he’d killed someone. I condensed the quotes awkwardly.

Your intent was clear to me, but your phrasing left an opening that I thought permitted me to make a point in a funnier way than was otherwise available.

Honestly, deliberately misinterpreting ambiguity is like 80% of what I do for fun.

Cars cut each other off all the time — and they especially cut off vehicles they don’t want to get stuck behind.

I know the BP way is to assume no driver is ever telling the truth and that they operate with wonton disregard and a total lack of skill, but what do people here think the driver should have been done if he were abruptly cut off and put in a situation where a collision was imminent — take no action and pulp the driver in his car?

Seems like the prudent thing to do would be to use everything the situation offered. If the handling limits of the vehicle didn’t allow it to be maneuvered into an open space, it could well be that risking rolling it onto space unoccupied by anyone else would be by far the best option. BTW, if the truck were loaded improperly (something the driver wouldn’t necessarily know), it could have a huge impact on the outcome.

Given how many people seem to lack the ability to stop or pull off an effective evasive move on a highly maneuverable bike going less than 15mph which can brake in a few feet to avoid getting hooked or cut off, y’all shouldn’t be so quick to cast stones at others.

I believe that’s “wanton” disregard, unless you’re referring to his disregard causing a dumpling of his load onto the street.

“take no action and pulp the driver in his car”

yes! don’t let the bad driver get away with no consequences… everybody needs to stop enabling bad driving, especially when you end up taking the fall for it like this truck driver…

It’s clear that you have never been trained to drive a truck. A big part of that training, explicitly spelled out in the literature one receives from most state licensing agencies, is to be aware of where every vehicle is on the road and what their speed, lane changes and other clues tell you about what they might do and to plan accordingly. Cars don’t come from out of nowhere. This guy should have seen this coming and slowed down before the car cut him off, assuming there even was a car that cut him off. Rolling the rig there is evidence of a poorly trained driver who should confine himself to class C vehicles.

My thinking was, since these is a recurring happening, that the speed combined with the turn just might be a factor in this location. I see trucks making turns all the time at what seems to me too high a speed to be able to stop or correct for other drivers’ errors. Although, perhaps as the officer suggested, removing one of the two turning lanes would help if it was a “cut-around” issue.

I also see trucks moving too fast here. Vehicles in general move too fast here — there’s sometimes what amounts to a race from Grand to get in front. That entire area is problematic on a number of dimensions.

Maybe the driver was going too fast, maybe he wasn’t. But it’s a very realistic possibility that he was cut off while operating in a safe manner.

Whether he made an error or not, this will cause problems with a career where maintaining a clean MVR is important.

I think if you tip your vehicle on its side, you’ve done something wrong and should receive a citation. Drivers cut off trucks all the time, it’s true. That means it’s part of the job; the truck driver should have been prepared.

drivers ignore the bikes in the bike lanes when making a right turn…. the bikes should be prepared. Does your logic still hold up?

yes, the logic still holds up…

Once again, the obvious solution is a stop sign enforcement action at Ladd’s Addition. It’s those damn bicyclists, again!

should be multiple violations… exceeding the basic speed law, and obstructing the sidewalk… you’re driving too fast if you tip over your truck on a corner…