Ever since Better Block PDX popped onto the scene in 2013, this all-volunteer group of tactical urbanists has captured our imagination. Their daring and creative street transformation projects have had a real impact on how we experience transportation. And more importantly, their projects have influenced hearts and minds of thousands of Portlanders, including many of whom work at 1221 SW Fourth Avenue.

Long before Better Naito became a City Hall darling, the idea was hatched by Better Block volunteers over beers and pizza. In years past, the group would choose its projects based on an internal and informal process.

Now for the first time they’ve opened up the decision-making to the public. If you have an idea for how to make a section of streetscape better, Better Block wants to hear from you. 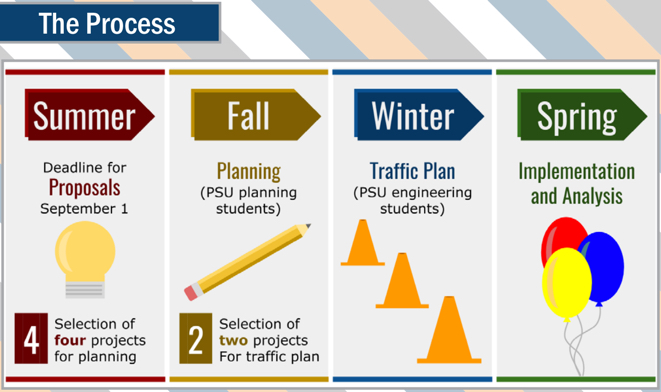 Here’s more from the call for proposals:

“Better Block PDX is requesting proposals for ‘pop-up’ projects from community organizations. This is an opportunity to partner with transportation planning and engineering professionals and students to demonstrate what a street or public spaces can be when they are designed for pedestrians and cyclists.”

A ‘pop-up’ project is one that is installed to create a real-life demonstration of what’s possible. They usually last only a few days; but the idea is that the ideas they inspire are permanent. Projects can be things like traffic calming solutions, carfree public plazas, DIY crosswalks and bikeways, play streets, and much more. If you can dream it, you can probably do it.

The deadline for proposals is September 1st, so now is the time to ask your neighbors about your idea. Once you’ve got something, fill out the online form and wait to hear back from the Better Block team. They plan on choosing four larger-scale projects that will be assigned to a team of Portland State University students. Two of those four projects will move forward to full implementation and all proposals will get a follow-up email with advice on how to bring them to life.

Check out this PDF for the full request for proposals and you can use this online form to submit your idea.

And don’t forget, the City of Portland is also looking to help residents with livable streets projects. They just announced a series of workshops where you can learn more about the $100,000 that’s up for grabs as part of their “Portland in the Streets” program.

I’d love to see the curb bump-out plazas at SE 26th and Clinton come back, but on a bigger scale. It would be really transformative to have the entire stretch of Clinton from 25th to 27th completely car-free.

I would like to see to curb extensions along Sandy between 11th and where it ends at 7th. Because the street cuts diagonally through hte grid, some of the crossing distances are huge! I think some turns for motor vehicles could be restricted, too. Another simple one would be to remove parking on Skidmore between MLK and N Michigan and connect the bike infrastructure. This would fill in an important gap, and connect business districts and neighborhoods across MLK, Vancouver, Williams and Mississippi using existing intersection controls (signals and one 4-way stop sign)

With the new hipster hovels at Skidmore and Williams, Skidmore could really use some “transformation” now. How do we get bike lanes from Interstate to MLK?

Better Block is doing a similar project out here in Greensboro NC, in a wealthy white older neighborhood called College Hill, near UNCG and downtown. Lots of neighborhood traffic calming in a city that takes great pride in being #1 in car-friendliness: https://collegehillneighborhoodplan.wordpress.com/ch4e/

About College Hill For Everyone

The College Hill Neighborhood is embarking on an exciting new project that aims to reclaim College Hill’s streets and sidewalks as safe, inviting places for people! College Hill For Everyone will launch in August with a series of temporary demonstration projects that combine traffic-calming, signage, art, branding, history, and community events to strengthen College Hill’s identity.

The College Hill Neighborhood Association and the City of Greensboro have partnered with the smart folks at Team Better Block to draw on their extensive experience and innovative ideas!

Phase 1 of CH4E will begin on August 1, in conjunction with National Night Out. With YOUR help, the College Hill Neighborhood Association will transform several intersections along Mendenhall Street (from Rankin Place to Walker Avenue), into people-friendly places. The National Night Out celebration will be on Mendenhall Street between Carr Street and Odell Place. This 150 ft section of Mendenhall will be closed to motor vehicles, so that friends, neighbors, and visitors can stroll, chat, create, and play. WE NEED YOUR HELP — If you can spare some time, you can help us make this event AMAZING!

(Mendenhall is a very narrow collector street, similar to SE 20th near Salmon, and normally just as busy. 2 of our 8 bike shops are on this street.)