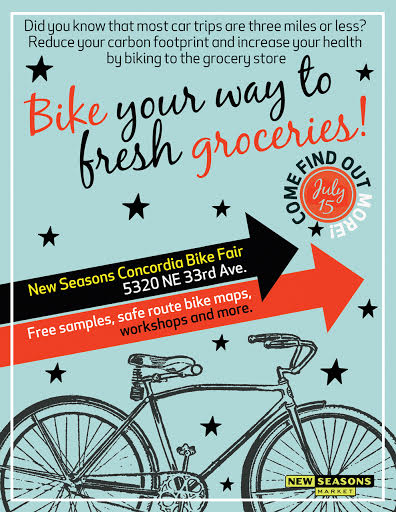 For an ever-growing grocery store chain, New Seasons Market is pretty responsive. Don’t see your favorite crackers? Chances are they’ll either start carrying them or tell you why they don’t or can’t.

The (mostly) Portland-based business even responds to bicycle-related requests. When I contacted them a few years ago about making sure their North Williams Store (situated adjacent to the best bike street in Portland) had great bike parking, they not only listened, they invited to help plan the racks. They even went for one of my crazier ideas: storage lockers for bicycling customers.

Now they’ve done it again. On Saturday, the New Seasons in Concordia (5320 NE 33rd) will host a bike fair aimed at raising awareness of just how easy (and popular!) it is to ride a bike to the grocery story. ‘Safe Routes to Groceries’ was the brainchild of retired Portland optometrist Armando “Jerry” Zelada. Zelada is a fixture in bike advocacy circles and is former chair of the State of Oregon Bicycle and Pedestrian Advisory Committee.

He approached the Concordia store’s community coordinator Tanya Leib with the idea of, “Teaching and inviting people to bike to the store as a way to be active and reduce use of automobiles because we know that half of the automobile trips are three miles or less.” And because, believe it or not, many people still assume it’s impossible to get your groceries home by bike.


To make the event fly, Zelada has partnered with two local bike shops (Gladys Bikes on Alberta and family/cargo specialists Clever Cycles on Hawthorne), the Portland Bureau of Transportation and North Street Bags. The shops will be on hand to offer expert advice about how to carry groceries on nearly any type of bike — even if you’ve got kids in tow. They’ll also offer free bike safety inspections. 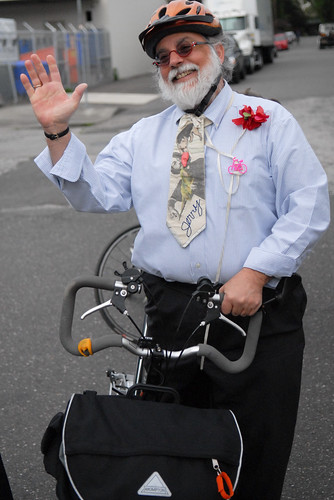 PBOT will be there to give out free “bike buckets” — those DIY plastic panniers you might have seen around town. They’ll also give out maps and offer custom route-finding from their team of Transportation Options Ambassadors. Locally-based North Street Bags just happens to have a “grocery pannier” model made specifically for carrying a grocery bag. They’ll raffle off a set to one lucky winner. Rounding out the fest vendors will be The Street Trust — Portland’s largest bike (and now walking and transit!) advocacy organization.

And since it’s New Seasons, they’ve also lined up a bunch of great food vendors (including the new Nossa Familia cold brew-dispensing cargo bike) — so bring your appetite!

For Zelada, this event is also about promoting the need for safe bicycle access on streets that connect directly to businesses. For years now, PBOT has focused primarily on sidestreets and “neighborhood greenways”. Those are important, but pretty useless if there’s a dangerous gap between you and your local market.

“We would love to see people at the event who already bicycle to get groceries and join in teaching others who are just on the verge of trying it,” Zelada says.

What a great idea–I love it!

Hats off to A.J. Zelada.
Back when New Seasons was building their Hawthorne store I advocated for them *not* to build rooftop CAR parking, and pass the millions saved onto their customers, who almost certainly are mostly *very* local, and could have been encouraged (as in this delightful promotion) to walk and bike. Many of course do already.

No one was interested at the time, and the response was that a bank wouldn’t loan them the money to build the store without XY amount of car parking. And I didn’t care for banks even before I learned that.

Is New Seasons responsive when it comes to complaints about the way their customers drive ? I’ve had so many near misses with drivers coming out of their lot on Williams and either not looking and cutting me off, or worse, looking right at me and proceeding to drive just inches from my front tire. Same with those looking to turn into the lot from Williams, one is lucky if you even get a turn signal. It would be great if they would also hold this event at the Williams store, and maybe look to reconfigure their parking lots to reduce car/bike conflicts.

I’m not sure how they are responsible for idiot drivers but yeah that area is not too cool to ride near any more.