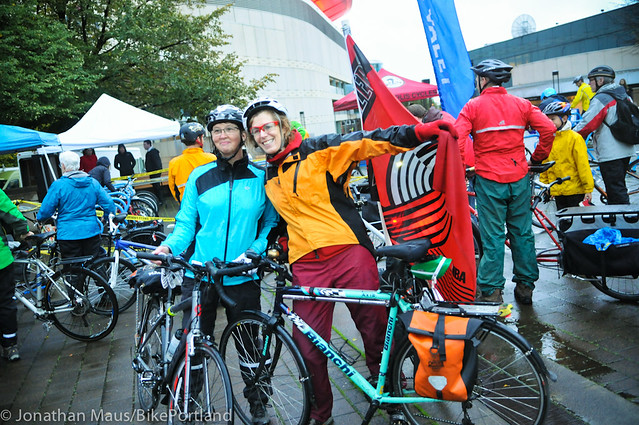 The bond between biking and the Blazers just got a lot stronger.
(Photo: J. Maus/BikePortland)

It’s going to be a great season for the Portland Trail Blazers — and we’re not just talking about what happens on the court.

Earlier this week the Blazers announced their 2016 Community Partners and the Community Cycling Center is one of them.

Each year the team chooses a host of local nonprofit organizations to help with fundraising and awareness-building throughout the season. The partners become beneficiaries of in-game “50/50” raffles (where half the proceeds from tickets goes to the winner and the other half goes to the selected nonprofit) and get exposure during the game via halftime presentations held on the court.

But perhaps more importantly is how this partnership will help present cycling to a whole new audience: The Blazers are the biggest sports team in the region and they have a vast reach into many households and fans who might not otherwise see positive and diverse images of cycling — two things that happen to be the CCC’s specialty.

Here’s what CCC CEO Mychal Tetteh had to say about the Blazers and what the partnership means:

“The Trail Blazers are much more than our city’s home team. The Blazers have been a powerful force for change in our communities through partnerships, works, and philanthropy… Together, we will connect more people of all ages, abilities and backgrounds to their communities and each other through the power of bicycling. It’s going to be an exciting couple of years.”

What makes this news even sweeter is the stellar company the CCC finds themselves amongst. The four other 2016 partners are: The Black Parent Initiative, whose director Charles McGee was a member of the Portland Bureau of Transportation’s Vision Zero Task Force; the Latino Network; Girls Inc.; and Adaptive Sports Northwest, a group with a strong presence in the local cycling scene with their weekly handcycling series.

We’ve been big fans of the Blazers have worked for years to build stronger connections between cycling and their organization. This is such a cool step forward and we’re thrilled to see what comes of it in the coming season.

Speaking of which… Have you gotten your tickets to the Transportation Night/Blazers Bike Night game yet?