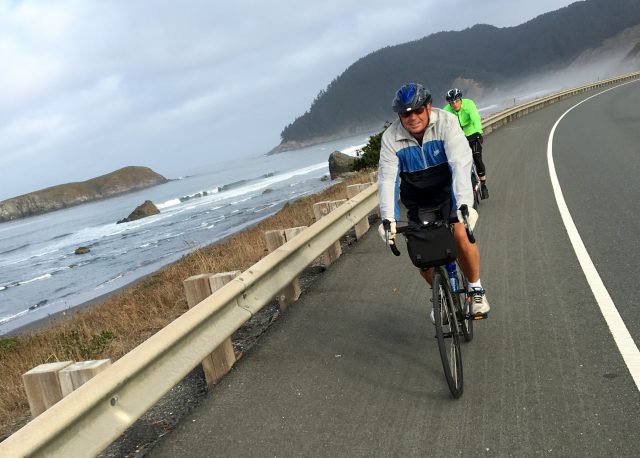 For Hedenskog, bicycling isn’t just a hobby. He’s an unabashed advocate and wasn’t afraid to share his frustrations with the Oregon Department of Transportation — the agency responsible for Highway 101.

“ODOT needs to change its preferences. When the road narrows they always take from the bikes and never from the auto lanes. They need to give safety the preference over motor vehicles.”
— Ron Hedenskog, mayor of Brookings

“ODOT needs to change its preferences,” he said. “When the road narrows they always take from the bikeway and never from the auto lanes. They need to give safety the preference over motor vehicles.”

Hedenskog is drafting a letter to ODOT to share his concerns. He’s also working with the mayors of Gold Beach and Port Orford to present a united front to lobby the state for safer bicycling on the Coast Highway.

“Here’s the way I see it,” he said. “We’ve been cut out of our resources with timber and we need something to replace it. And the state is promoting tourism, so let’s get on that bandwagon.”

What about coastal residents who are, how shall we say, not as enthusiastic about biking as the mayor? Hedenskog embraces that fact.

“You’re in redneck country here,” he said candidly. “But to me that means people are fiercely independent, it doesn’t mean they’re insane or anything.”

Like everywhere, he says people are just set in their ways. “They know they want something different, they just don’t want to change,” he said with a chuckle.

Out on our bikes, Hedenskog was like a professional tour guide, telling us stories about the land around us. He pointed out the state’s only “land glacier” at Hooskanaden Creek — a massive hillside that is so saturated it’s constantly moving toward the ocean.

He also pointed out the big hole in Mack Arch — so big that he’s heard of people flying through it in small airplanes.

As we hiked along the Oregon Coast Trail at the Natural Bridges Viewpoint he told a story from when he was 18: Standing on the cliff with some friends looking at seals in the water, a big black thing came out of the water. “It was an Orca, a killer whale, and it snatched that seal right up.”

There was also the time he was walking on the beach at Rainbow Rock and found several artifacts that had been used by a native tribe that lived in the area.

Learning about this area from someone like Mayor Hedenskog while taking advantage of the distinct advantages of the bicycle as a tool for exploration and conversation made for a very memorable day.

After saying goodbye to the mayor at the lunch stop at Harris Beach in Brookings, my riding partner and I continued south to the California border for no other reason because it was only six miles away.

On the return route, we wanted to stay off the highway as much as possible — and we found some wonderful detours.

The official Cycle Oregon route took us on Carpenterville Road — which Mayor Hedenskog told us was the old Coast Highway up until 1966. Today it’s a quiet backroad with big views of the ocean and coastal hills from high atop a ridge. Carpenterville Road led us to the Pistol River where we crossed over a bridge and ended up on Myers Creek Road — another alternative to the highway that was equally rewarding.

Now it’s time to rest up for our big day tomorrow when we’ll head for the massive climb up Bear Camp Road (which you might recall from my explorations last month).

Thanks! Southwest Oregon is great.

To me, the southern 1/4th of the state is the best part of the entire coast route.

rick
Reply to  Dan A

No casinos and far less RVs on the southern coast.

B. Carfree
Reply to  rick

If you don’t count that casino just across the state line, or the other one just south of Crescent City.

My favorite section of the coast is from Newport to Florence.

I’ll just disagree with your southern 1/4 theory because Bandon to Port Orford is flat, straight and boring. Cape Arago and Sunset Beach are great.

Gold Beach to Brookings was interesting because of the hilly headlands but the exposures south of Yachats are a lot more awesome.

Dan A
Reply to  Doug

I had a huge tailwind and sunshine, and traffic was a lot lighter than on the rest of the route. Surely that influenced my opinion.

As I said on another thread here recently, ODOT needs to sit down with landowners to work out right of way deals so that the OR Coast Trail can be separate from US-101 wherever possible. Using old alignments like Carpenterville Rd. and new trails like the one seen here are a must. The mayor is right. If this is a tourist area, then give them something comfortable and safe to travel on. Applause!

B. Carfree
Reply to  Ray Ogilvie

I was wondering about that. There sure are a lot of CCC-built depression-era bridges along the coast for there to have not been any highway, including the little-known Golden Gate just a wee bit south along US 101.