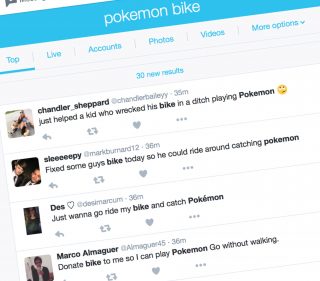 Pokemon Go has gamified cycling. The new app that’s taking the world by storm also happens to be great to play by bike. As more and more people realize this, the game could do more to encourage biking — especially among young people — than decades of advocacy.

I haven’t tried it myself but I’ve been monitoring chatter about bikes on the internet long enough to know when something big has happened. And it has.

The game itself is really interesting. It uses a combination of your smartphone’s map and camera to “augment reality” by placing the game’s features right on the streets where you live, work, and play. When it first hit the news all the reports were about people playing it on foot. We then started hearing about people playing while driving (bad idea!). And now it appears that a bicycle is the secret Pokemon Go weapon.

Not only has my bike allowed me to access Pokéstops more quickly—so it’s easy to stock up on Pokéballs and other items—but it’s also proved invaluable in hatching eggs. Eggs are items you can find at Pokéstops. To hatch them into Pokémon, you have to walk (or even better, ride) a certain distance—between two to 10 km, as measured by your phone’s accelerometer. Eggs won’t hatch if you’re traveling that distance in a car—so you essentially have to get outside and use your own body to get the job done. On foot, this can take a while because you have to leave the app open the entire time for your steps to count. But on a bike? I think you know where I’m going with this.

Although not really a cycling app, Pokémon Go is the first cycling-adjacent app I’ve ever given a damn about

Giddings has written a great primer about how to do Pokemon by bike.

Lifehacker also a post up about how to turn your bike into a “PokeBike.” The author of that piece said, “The first time I hopped on my PokéBike, I felt the same giddiness I had when I was a kid pretending to chase imaginary monsters in my neighborhood. I hope you get the same kind of joy out of yours.”

Making biking fun is one of the most powerful ways to get people riding.

Like $5 gasoline or the Naked Bike Ride, Pokemon Go has people who haven’t ridden in years suddenly dusting off their saddles and filling up the air in their tires to go for a spin.

My grandparents are really mad bc I asked them to blow up my bike tires to go get Pokemon. Like last week you bitched bc I'm always inside?

The stream is packed with people who don’t normally bike but say they’re eager to get rolling just to play. Isn’t that awesome?!

What isn’t awesome is all the crashes I’ve seen on that stream — that involve both the players themselves and the people around them. If you play by bike, make sure you read those posts from Bicycling Magazine and Lifehacker. Both of them have safety tips (like learn how to play on foot before your ride, use a handlebar mount for your phone, only play on low-traffic streets, stop often, and so on).

Have you played this game yet? How about by bike? Do you think it will significantly change people’s walking and biking habits?

I think if it’s played safely, this game could be a huge boon for biking in America. Even if the game is a passing fad, there will surely be others. And as many of you know, once you start riding a bike you never want the fun to end.

I have mixed emotions, it is pretty cool to be able to tell my kids to get outsides and play a video game but I work at a local attraction that has become a human pinball machine in some areas due to the distracted pedestrians.

Some handy tips would be: Ride WITH traffic; DON’T suddenly stop in the middle of the bike lane or road or sidewalk; WATCH where you’re going, don’t spend the entire time staring at your phone….

My friend plays this game and says that your phone buzzes when you’re close to one so you don’t have to stare at it the entire time, so in theory you shouldn’t have to ride around staring at your phone.

And always pick Squirtle as your starter.

Game seems to buzz when you are close to a pokemon (animal). Not the normal pokeball locations.

I started playing on Monday because I realized it’s a cool way to see historic architecture, murals, and the like. I’ve tacked it on to a couple of rides and looped around a bit, riding on streets I *thought* I’d been on but actually haven’t been- even just a block off my normal route!

Yes, don’t stare at the phone, don’t ride while using the phone, get off my lawn, etc. Of course.

Pokémon Go is reportedly helping people with their depression from ScienceAlert.com

The tweets are HI-larious!

What’s the carbon foot print of all those overheated cellphones?

Chris I
Reply to  borgbike

I’m playing Pokemon Go (my excuse: I have kids). And I did take a slow ride home yesterday on a different route than usual to get some more Pokemon (Waterfront Park was an excellent source!).

I didn’t set up my bike, though. I either walked it or rode between Pokestops. I didn’t try to play while riding and kept my phone in my pocket while cycling.

Setting up your phone on a handlebar holder seems brilliant in a super dork sort of way. So I just might do it.

Just a note- Cait hasn’t lived here for many years…

Seems like a scooter would be closer to the right speed and maneuverability. Maybe a small-wheeled (and/or folding) bike. But the smaller the wheels, the more you have to look out for holes and bumps. Easier to hop/run/walk your way out of a crash though.

I’ve had problems with accelerometer apps thinking I was walking or driving while going up or down steep hills. “Is that a smartphone in your spokes?”

How can I get an alert when somebody is about to stop in front of me for an imaginary reason?

Just in time for bike share. If Nike was smart they would do a collab with Nintendo to promote the use of bike share for Pokemon Go.

My secret hope is that by not functioning at driving speeds, this app will be a Trojan Horse for disabling everything on cell phones at driving speeds except 911 calls. If it becomes normal that popular things on phones don’t work when your car is in motion, then maybe we can stop some of that distracted driver CARnage.

That said, I did see some folks playing it while driving in a crowded parking lot today. Even so, I’ll take my chances with 10 mph driver zombies as compared to the 40 mph version.

Craig
Reply to  B. Carfree

So true. All the sensors needed to accomplish this are already present in most smart phones, including in some cases eye motion sensors to be able to tell the difference between the eye motion of a car passenger vs a driver.

It’s funny to see Pokemon Go take off like this. We’ve been playing Niantic’s first game, Ingress for years. We even have a bikegress group.

Seems that eggs are 10mph max speed, with a lockout time if you exceed it. I am just fast enough on my skateboard that every dip in the road stops the egg timer, but uphills are ok, if the lockout is over.

The skateboard is nice for handsfree.

oh boy, more screen time while on the road! What could go wrong?? Hang up and ride.

At least it’s getting them outside and moving.

It might be fun until you’re the one caught in the middle of that confluence.

How about just putting the phone down for a change and actually experience life?

I’m happy that some people enjoy life, with or without a phone.