Why are all those people drinking coffee and eating donuts on the bike path? 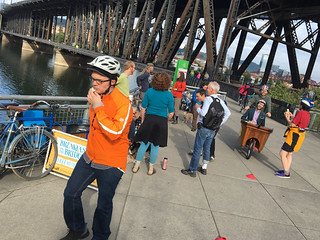 The scene this morning on the Esplanade at the Steel Bridge.
(Photos: J. Maus/BikePortland)

If you’re new to biking in Portland you might notice something afoot on the last Friday of every month as you pedal into downtown: A bunch of happy-looking people standing around with coffee and donuts in their hands.

Next time you see this, consider stopping: It’s for you!

What you’re seeing is an old Portland tradition known as Breakfast on the Bridges. For the past 14 years (14!) a hardy bunch of volunteers affiliated with Shift have been serving food and drinks and smiles on downtown bridges from 7:00 to 9:00 am. It currently happens on the Hawthorne (west end), Steel (east end), and the Tillikum (east end). The selection of eats varies from month-to-month. I’ve seen everything from bagels and bacon to made-to-order pancakes. This morning on the Tillikum Lilian Karabaic and friends offered chocolate peanut butter oatmeal cookies and banana muffins.

If you’re wary of stopping because you think you’ll have to sign up for something or listen to someone’s political or product pitch, don’t worry. “B on B” (as the locals call it) has no agenda (although politicians have been known to show up). Like everything Shift makes happen (Pedalpalooza and the World Naked Bike Ride included), the goal is simply to have fun and meet people.

This morning I stopped by Steel Bridge on my way in. It was a bustling scene with people streaming by on bikes and on foot while several groups of people enjoyed coffee and conversation overlooking the Willamette and downtown skyline. It was a wonderful way to start the day. 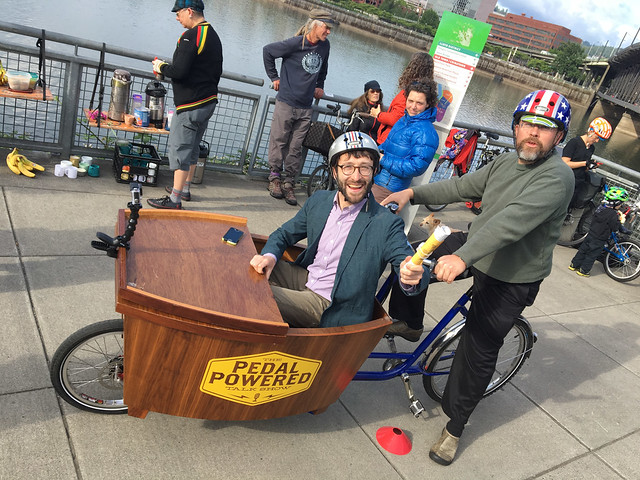 Boaz Frankel (in the cargo box) and Phillip Ross from the Pedal Powered Talk Show where there passing out Bike More Challenge prizes. 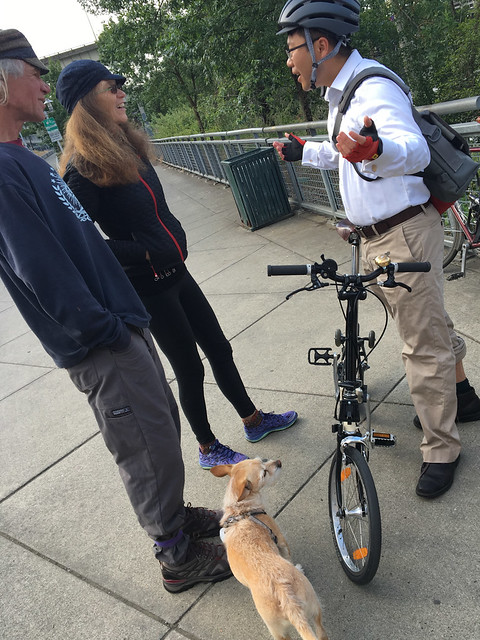 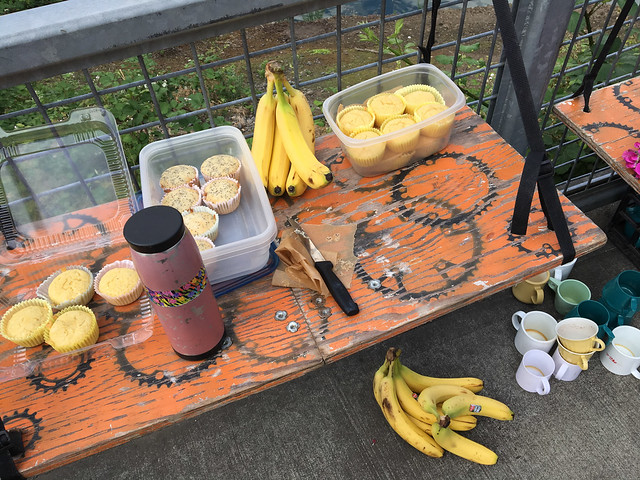 During June the B on B crews will be out in force every Friday of the month. Next time you see them, pull over and stop for a spell. If you end running late they’ll even give you a tardy slip.

To learn more, read our recap of the 10-year Breakfast on the Bridges anniversary party, peruse our archives, and follow @bonbpdx on Twitter.

Always a nice perk…if you commute across the river…on the right bridges.

Seems like kind of a narrow view to take. I’ve never once participated as I don’t commute across these bridges to work, but I love that it happens all the same.

I always stop for these and end up chatting with people for a while about bikes! Definitely worth being late to work for!

Like everything Shift makes happen (Pedalpalooza and the World Naked Bike Ride included), the goal is simply to have fun and meet people.

political advocacy/activism is both fun and a good way to meet people.

Yep – a true Portland institution…a national best practice IMTO. (Thanks Timo and others for this commuter treat.)

Is it at all 3 of those bridges each time, or does it rotate?

On most years, there is a breakfast event in May (one year in December) at the Burnside bridge over I-205, sponsored by EPAP, ODOT, PBOT, and others. Usually 75 bicyclists pass by, and 30 stop to chat.

While I’m a supporter of cool/fun bike things, I have a minor criticism of this event that happens at the east side connection to the Steel Bridge lower deck.

It’s a bit of a hazard for those attempting to cycle through the area due to the bottleneck created by the booth and hanger-arounds. If they shifted over towards the stairs a bit and made it easier to maintain a clear path line to the lower deck and the east side esplanade it would be much better.

I was thinking the same thing as I rode by, but then, honestly, I realized I’m a grump and folks can just slow down for a second.

I got interviewed by KBOO for a bike podcast this morning at the B on B! I’ll keep you all in my thoughts once I achieve my fame and fortune from the celebrity this is sure to bring.

Thanks Jonathan,
What a great tradition! I don’t think Portland is Lucky, you are good!
This creates such a great atmosphere of community around bicycles. Yes, it may jam up traffic a little on that last Friday of the month. You may even get some people out there who only ride on the last Friday of the month! And that’s okay. You are creating awareness. You are creating excitement. You are creating delicious food!
Keep it up Portland. Hopefully the rest of the country will catch up to you. I’m doing my part to push Boulder forward.
Fun post Jonathan!

I certainly miss this every month on the Burnside Bridge. I wish it would come back!

We did it last Wednesday, too. First time in Buchholz (Germany). http://buchholz-faehrt-rad.de/gratis-fruehstueck-fuer-radler-201608387/