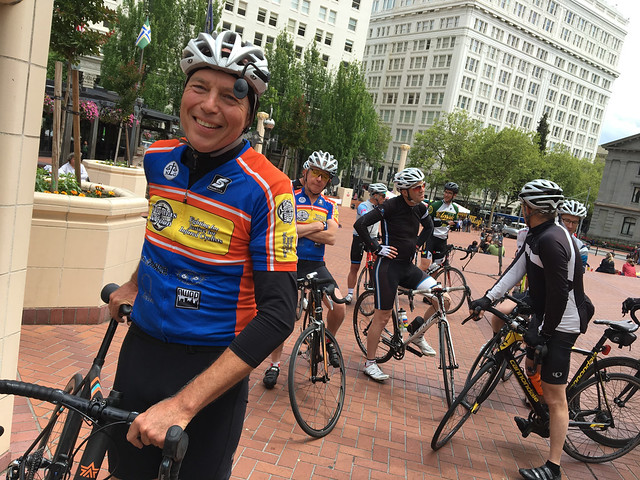 Lawyer Ride founder Ray Thomas in Pioneer Courthouse Square where friends and colleagues have been starting a weekly training ride for the past 25 years.
(Photos: J. Maus/BikePortland)

In 1991 two Portland lawyers, Jim Coon and Ray Thomas, started riding in the west hills above Portland twice a week during their lunch hour to stay in shape and let off a bit of steam. 25 years later both men are still doing those rides — every week, rain-or-shine. Today I finally joined them.

“The Lawyer Ride” as it’s become known is a legendary weekday group ride that meets at the southwest corner of Pioneer Courthouse Square at noon every Monday and Thursday. In summer the group swells to well over 40 riders. In winter, when it’s not uncommon for roads to get icy and it’s almost always wet and damp, the ride shrinks in size but grows in importance to the hardy souls who show up.

In the biking world there are few things as important as a fun and dependable weekly group ride to keep you motivated in the winter, maintain fitness and racing skills, and spend time with friends old and new.

Today we had a healthy group. Two dozen people amassed in the Square and we picked up another half-dozen or so as we made our way out of downtown and onto NW Cornell Road.

The route of The Lawyer Ride hasn’t changed for 25 years. On Mondays they head up to SW Fairmount (just under Council Crest) for few laps of fast-paced riding around the flat loop. And today (like every Thursday) it was “hill day” — or “hell day” if you’re not feeling fit. We rode up Cornell to Thompson (some took the super-steep NW 53rd option) and Skyline and then back downtown through Washington Park.

This ride is known for being fast. People show up to push themselves — but it’s also friendly and welcoming. On my way up Cornell I met a few lawyers and was introduced to two county judges. I overhead a few people talking about a $44 million dollar settlement that had just come down. The ride is a great place to network and hear the latest legal scuttlebut. 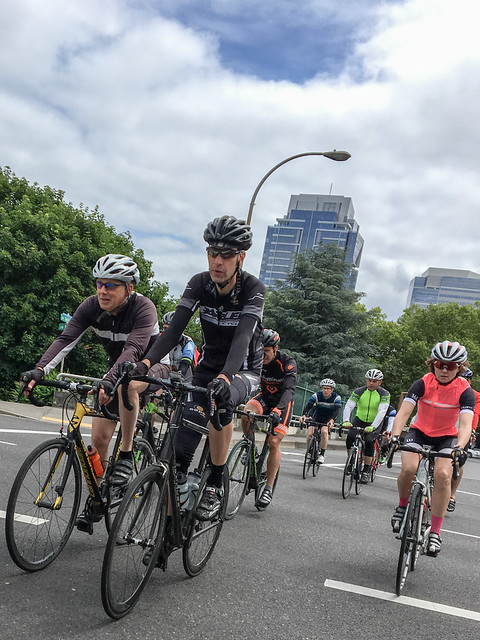 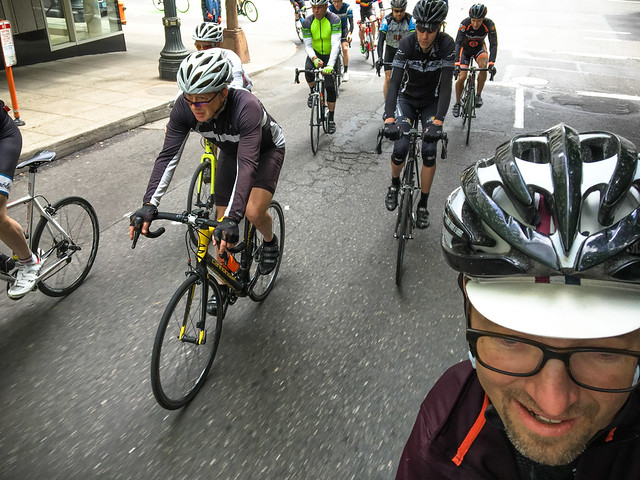 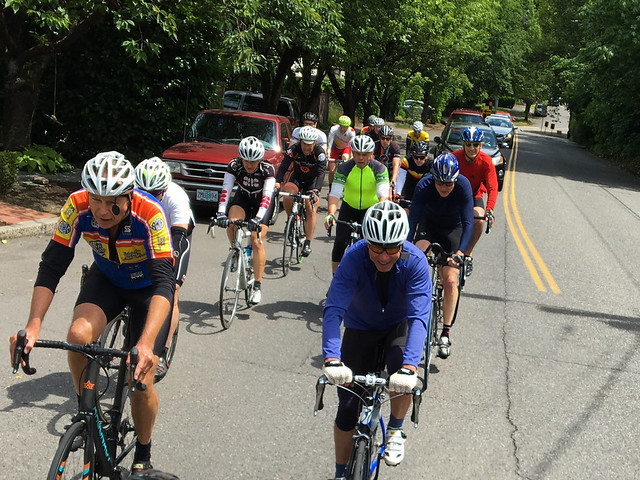 About half the pack heading up Cornell behind Ray Thomas and Richard Marantz (in blue). It’s not easy to drive around a group this size on roads in the west hills, but people were patient. They’re probably used to it by now. 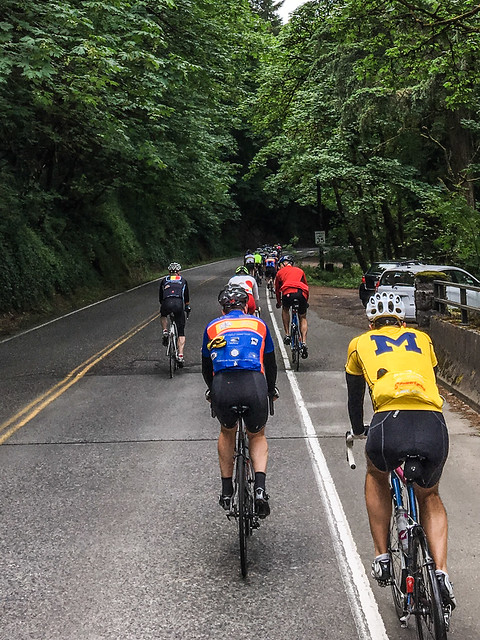 The ride is known for being very fast in the hills. The pace is calm up to the Portland Audubon Society, then it takes off. 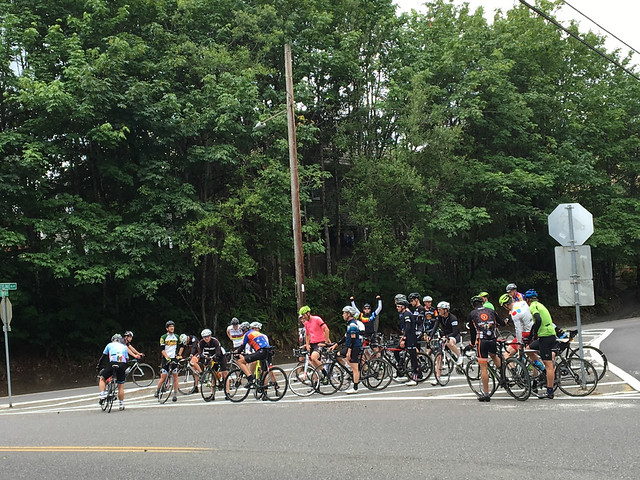 Thankfully there are several regroup spots, like this one on NW Skyline and Thompson. 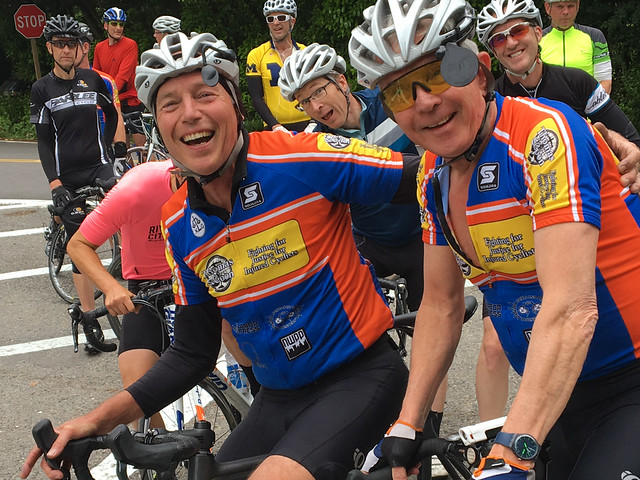 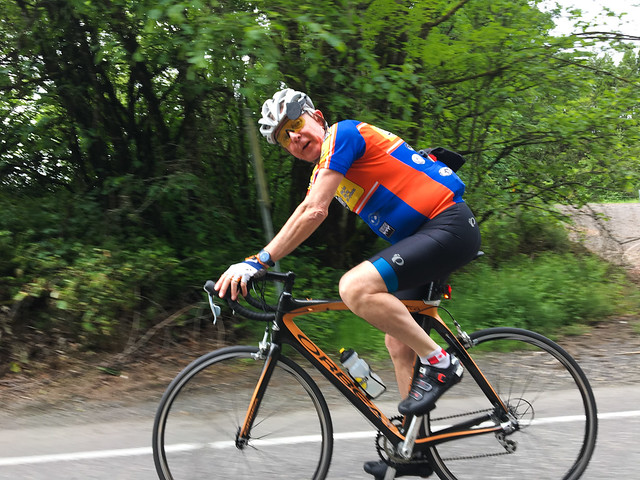 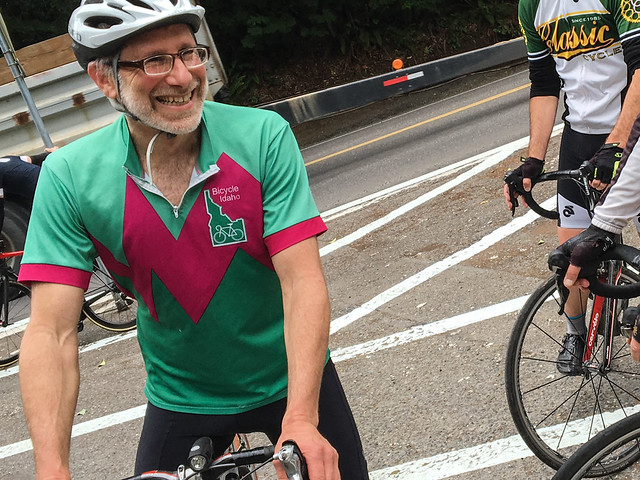 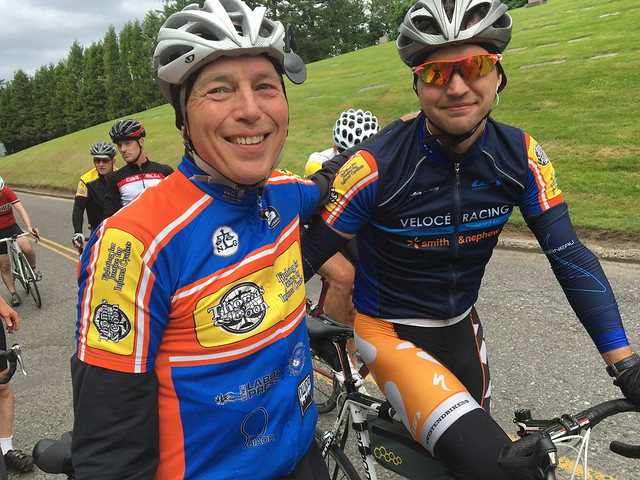 Ray and his son Chris have been doing this ride together for 19 years.

“For a lot of these guys,” Thomas said. “They come out here and hammer and then it’s right back to the bench.”

Thomas is a well-known lawyer in local biking circles for his legal expertise and advocacy. His books and blog posts here on BikePortland are invaluable resources and he’s helped push for many bike-specific law changes over the years. Jim Coon is both his riding partner and legal partner in their firm Swanson, Thomas, Coon & Newton. Another person on today’s ride with a close connection to Thomas was his 31-year-old son Chris Thomas. Chris started coming on the ride when he was just 12 — on a tandem behind his dad.

Thomas, now 64 and riding as smooth and fast as many men half his age, clearly takes a lot of pride in this ride. And he should. “The idea of lawyers getting together during noontime to ride bikes was sort of a novelty in 1991,” Thomas wrote recently on The Lawyer Ride’s Facebook page. Now of course it seems completely normal. That might be because for the past 25 years this same classified ad has been running in the Multnomah Bar Association’s newsletter:

Before everyone split off and rolled back to their respective offices and court appearances, Thomas wanted to make sure I mentioned one thing in my story. “Tell everyone we’re looking for more young and slow riders,” he said with a smile. “We need more people to beat.” Spoken like a true lawyer.

Both Monday and Thursday are great fun with a great group of people. Everyone gets challenged an no one is left behind. Home you come again soon, Jonathan. PS. ride leaves SW corner of Pioneer Square at 12:15 sharp.

Richard Marantz in blue leading the pack with Ray.

Thanks Scott. Got the richard’s mixed up! of course that’s Mr. Marantz. Fixed it. And nice riding with you!

is the ride open to anyone or just those in the legal profession?

It’s open to everyone! Sorry that wasn’t more clear in the story.

About five or six years ago, in a season I was in reasonably good shape, I happened to run into this ride and chased them up the hill. Pretty rough day for me 🙂

Hey Jonathan, Thanks for coming on the ride and the great story! One note: I may ride like I’m 70, but I’m really only 67! Jim

Sorry jim! It wasn’t a guess. I heard that on the ride but had you confused with someone else. This is what I get for writing a story without any written notes!

While this story may not be about advocacy, I’d like to thank Ray Thomas for the work he does towards making streets safer. I e-mailed Ray a question about a bicycle-motorist situation a few years ago and received a very prompt and thorough reply even though we have never met. Attorneys like Ray Thomas and Steve Magas in Ohio are good people doing great work. Thank you!

I ride with a group of rabbis and a Seeing Eye Dog. Could we join this group, or would they think we were turning their ride into some kind of joke?

I wold like to know more about his rear view mirror