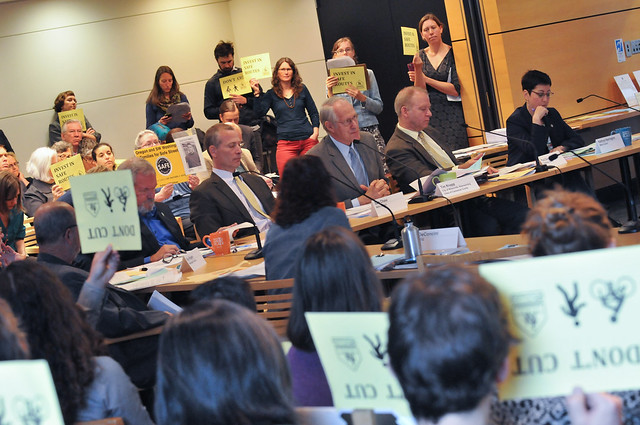 Yellow signs urging investment in safe routes near schools loomed over local elected and agency leaders as they considered how to allocate $130 million in regional flexible funds this morning at Metro headquarters.
(Photos: J. Maus/BikePortland)

A nearly two-year quest to raise funds for Safe Routes to Schools across the Portland region came to an end this morning. At the monthly meeting of Metro’s Joint Policy Advisory Committee on Transportation, elected and agency leaders voted to support a policy direction that will inform how $130 million in federal “flexible” transportation dollars are spent.

Back in August 2014 the Bicycle Transportation Alliance zeroed in on this pot of money as a way to bring Safe Routes funding to all 150,000 of the region’s schoolkids. They built up the For Every Kid coalition with 89 partners and campaigned for $15 million to be dedicated to a mix of programmatic (education and marketing) and infrastructure spending around schools. This morning the coalition filled two sides of the Metro Council Chambers with people holding bright yellow signs that read, “Invest in Safe Routes” and “Don’t Cut Biking and Walking.”

As we reported back in March the proposal up for adoption had nowhere near the $15 million the coalition had hoped for. Instead that number was $1.5 million — or just $500,000 per year for the three-year funding cycle. With that battle fought, and the final vote postponed last month until today, the only remaining suspense was whether or not any JPACT member would try to amend the proposal in a significant way.

And boy did one of them try.

Savas put forward an amendment that would have completely eliminated the $2 million for active transportation projects and he proposed an additional $6 million in project development funds for major highway projects (he named Sunrise Corridor and the Basalt Creek Parkway specifically).

Once put to the committee for discussion, Savas’ amendment was quickly denounced. 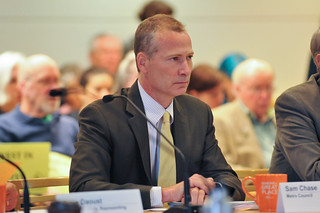 Councilor Chase was having none of Savas’ amendment.

And then came the final nail in the coffin: Wilsonville Mayor Tim Knapp — representing the cities of Clackamas County — said that even he could not support Savas’ amendment. 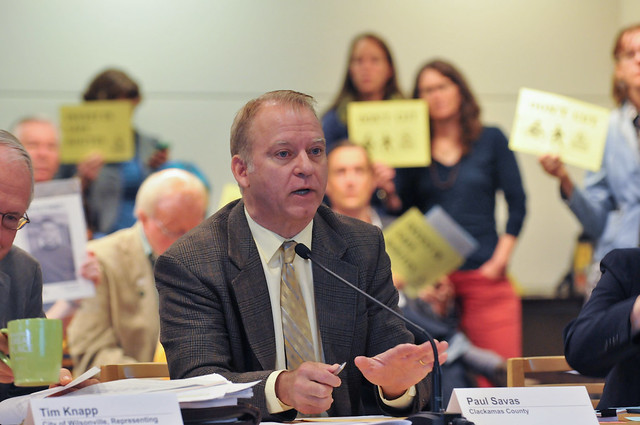 Mr. Savas garnered no support for his highway-building amendment.

When the vote on his amendment was called, Savas was the only JPACT member to vote “yes” on his amendment. It failed 15-1. And that wasn’t the only lonely vote for Savas. He was also the only person to vote against the policy package that was ultimately adopted.

Here’s a chart showing how the $130 million will be spent (we added a label for the Safe Routes money because the small slice was so hard to see):

When the dust settled, Safe Routes to School didn’t do anywhere near as well as advocates had hoped — but there are some positives.

In addition to the $500,000 per year in Safe Routes program funding, there’s the $2 million in project development and capital investment that will will be split up between capital investments in Safe Routes projects near Title 1 schools, regional multi-use paths, and other active transportation projects. And on the infrastructure side, the adopted proposal includes $26 million for active transportation projects. Another small step for Safe Routes is that improving access to schools has been upgraded to the highest priority in project selection criteria.

This $130 million in spending will be spread out across three years, 2019-2021. The next step is for agencies and jurisdictions to come up with project proposals. Those lists are due to Metro by August and will be out for public comment in October. A final funding decision will be made in January 2017.

Savas is clearly out of touch. His insistence that freeway interchange projects must take precedence over ped / bike routes and the Safe Routes to School sounds way too Republican. Good thing his idea lost 15-1. No doubt he’ll try to have this changed further down the process. How he wound up on this committee makes me shake my head in bewilderment. Does he really believe expanding freeway interchanges is the only solution?

Savas IS a Republican.

He is VERY in touch with the people of East Clackastan that want the employment and retail opportunities of a city but don’t want to be part of the city or be responsible for the costs their activities impose upon the city.

As long as it is cheaper for them to live their Marlboro-Man fantasy outside the UGB driving in daily to the city they can continue living this lie.
When the costs increase (in direct fuel costs, time spent, roads tolled into the UGB or a UGB specific gas & diesel tax) then they will have to make the hard economic choice of whether they actually are hardtack homesteading ranchers or dirty nasty city slickers.

This is a ridiculous, prejudiced, disparaging put-down of other people. You can as easily say that people in Portland want to drive through Clackamas County to go skiing without paying the costs. How about giving up the silly, polarizing comments and focusing on regional solutions that work for everybody?

I doubt that this will influence your closed mine, but Savas came in third in the primary election for Commission Chair here in Clackastan, as you call it. The fall runoff is between the incumbent and a candidate that is unabashedly in favor of public transportation. You and Novick should just keep making comments like yours here to ensure that there will be so much animosity we can’t work together.

I spend more than a little time in Clackamas. I’d call the comment sharp eyed and spot on.

A free-flowing road pollutes just as much as a congested one. People like Savas that drive everywhere just notice the garbage they are spewing out when they are sitting in it with the rest of us.

Dave
Reply to  Chris I

What is wrong with you? Comments like this have no place on BP nor in any civil discussion.

***This comment has been deleted. You are now on automatic moderation. Your comments will not be published unless you change your tone and treat others with respect. Thank you. – Jonathan ***

So accusing his wife of adultery is the moral thing to do? I bet you win a lot of support with your Trump-esque tactics.

I get that you don’t like our society and some of the people in it, but don’t become an internet bully.

I don’t get how blame for congestion- and parking-related emissions can be laid at the feet of active transportation advocates over & over again. That connection keeps being made, but it doesn’t make any sense to me.

But you’re right that the cities may have very different transportation agendas. Wilsonville, Oregon City, and Milwaukie in particular have been much more progressive on active transportation (it’s all relative) over the last 5 years or so. And Mayor Tim likes to mix it up with other electeds, so there’s that.

You’d think they’d have strategized all of this out at the county coordinating committee in advance. (Maybe they did?) I’d imagine Commissioner Savas knew his amendment was DOA, but wanted to get some roadway capacity priorities on record for when it’s time to take the case to Salem. As always, stay tuned.

To see the essence of Clackamas County and it’s transportation mentality I recommend the recent (aired on May 8 on OPB Plus channel 310) documentary “The Slow Way Home.”

Dan A
Reply to  Dave

Per the trailer, “In Japan, 98% of elementary school students walk to school.” In the US, it’s 12%. That’s embarrassing.

I think there is a place in the new Trump administration for this Savas Guy.

What’s wild is that Savas is the *reasonable* conservative on the ClackCo Commission.

I’ll just leave this here for anyone that needs it:
psavas@clackamas.us

I am very proud of Councilor Sam Chase for speaking up for investment for active transportation and oppose the non-sense amendment from Paul Savas. I want to see more Metro councilors follow Councilor Chase’s example to be advocates for safer streets, more transportation choices, and more strategic investments.

Don’t kid yourself, this wasn’t about expanding highways for Savas, it was without a doubt, only about de-funding the safe routes program.

If the amount of money we were talking about was more than 5 million, then yes, I’d say that it “might” have been about expanding compacity on the highways. But $5 million is chump change when it comes to highway funding- what’s that? about a quarter mile of a new lane.

Of course, his personal business might not have anything to do with his views.

There you go. Some of our worst opponents in improving things for biking and walking are those whose livelihood might be impacted (however slightly) by a reduction in automobile use.

Which, this being America, seems to be almost everyone.

Dan A
Reply to  GlowBoy

Oil companies, car companies, construction industry for example. Too bad there isn’t an equivalent bike industry as large as any of those who could lobby for our interests.