“I had given up hope”: Portland woman gets stolen bike back five years later 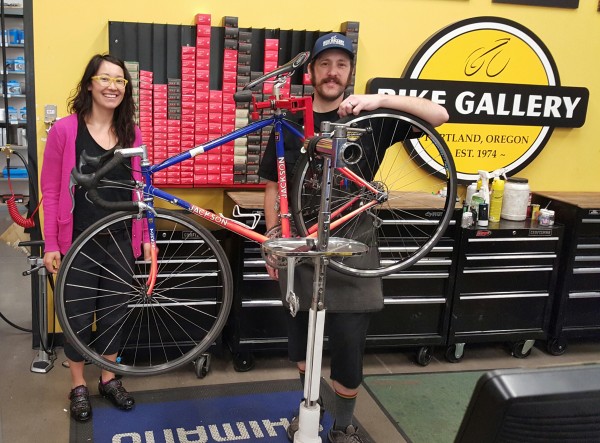 It’s been a while since we last shared a good stolen bike recovery story. So here goes…

Portlander Jade Koide emailed us last week with a pretty remarkable story that involved the theft of a bike that had a lot of sentimental value to her.


Back in the 90s Jade’s uncle built up a gorgeous steel Bob Jackson road bike that he’d built up for his wife. When she passed away, he gave it Jade. In June of 2011 Jade was on a Pedalpalooza ride that ended up at a beach off of Marine Drive on the Columbia River. It was one of those rides that ends with a party and goes all night long. In the wee hours when Jade was finally ready to head home, she went to grab her bike and it had been stolen. Right off the beach.

Jade was crushed. But she’s smart and immediately listed the bike on our stolen bike listings (which are powered by Bike Index). Nothing happened. “I had given up hope for it, but thought about the bike often,” Jade shared with us.

Then last week she got an email through Bike Index. It was written by Scott Scholl, the service manager at the Bike Gallery store in Clackamas. It read, “Hello. I just recovered your stolen Bob Jackson road bicycle. Please contact me.”

“I thought it might have been a hoax,” Jade recalled, “But it wasn’t.” She called Scott and it was indeed her bike.

According to the Bike Gallery, a man waltzed into the store with Jade’s bike one day and said he just needed some air. Scholl immediately noticed it was a special bike and started asking the guy questions about it. According to another employee at the shop, Scholl had “a bad feeling about the guy” so he asked to take a closer look. Scholl went to the back of the store, searched for “Bob Jackson” on BikeIndex.org, and there it was. He then told the man the bike was stolen and that a Clackamas County Sheriff was on his way to the store. Suffice it to say the man didn’t stick around to plead his case.

Jade is very thankful for Scholl’s quick thinking and for BikeIndex.org. “What an incredible bike community we have here in Portland,” she said.

wow. (I wish all mechanics had the care and time to check the BikeIndex.)

thief? maybe, how about person in possession of a bike that wasn’t theirs?
sorry to over-lawyer this one, but we have no facts to support that the person knew it was stolen, other than his leaving the store.
Maybe it was given to him and while he has suspisions, he dind’t know, and then once he knew, he walked away rather than get in trouble for a bike that was given to him?

I’ve had bikes stolen and know there is a special place below hell for bike thieves, but here we have only a guy with a stolen bike.
M

oops. good catch mark. Changed the story. I am typically much more careful with that but figured in this case, since I wasn’t identifying the person it wasn’t as big of a deal. That was a mistake. Thanks for keeping me on my toes.

If the guy wasn’t a theif why did he run when confronted about the stolen goods he had in his possession? Did he steal this bike himself from the rightful owner, maybe not, maybe he stole it from the person who stole it from her, maybe there were a few more folks in between, but one thing is for sure this guy didn’t want to have a conversation with the cops.

I think “Theft by receiving” is the official name of the crime, so still a thief.

Yes, Tim, you are correct. It is a crime to possess stolen property “having good reason to know that the property was the subject of theft.” Unfortunately, we find that many display a lack of scruples and buy stolen bikes second hand in spite of their suspicions/indicators that it is stolen. This perpetuates the theft cycle and is inexcusable.

Our monthly “stolen bikes recovery report” goes up on Friday, and it’s going to be bananas. March has been busy.

However, I have to say, if she really is as “smart” as the article claims, I am curious why didn’t she lock her bike before walking off and leaving it out of view for hours and hours? Especially a bike with so much apparent sentimental value? Unless I am missing something and it was locked?

Listen, I love a good bike recovery story as much as the next person, and i hate to be that debie downer. But reading many of the preventable situations in which these bikes get stolen really just… I mean… A u-lock takes eight seconds to lock.

Have you been on a Pedalpalooza ride?

Some people lock up at end points but not everyone, and there’s generally a vibe that everyone’s looking out for each other’s stuff. Sometimes stuff disappears but It’s really surprising to have a bike stolen at a ride end point.

Glad you got your bike back, Jade!

Assuming your stuff to will be safe just because there are lots of people around partying is a little gullible to me. But each to their own!

I’d like to formally challenge you to any kind of knowledge based competition with Jade. Good luck.

I saw her bio online and have a deeper appreciation for your comment.

Thanks for bringing the mandatory victim blaming to the party. My watch was a few minutes off, but I have set it by the exact, predictable, and sad timing of your comment.

As far as petty crimes go, is it really so ghastly to ask for some responsability and accountability of the the victim? We all make mistakes, regardless of booksmarts and hopefully we learn from them and spend $30 on a good lock.

I can’t tell whether you are trolling or not. To whom is the victim accountable, and for what?

Too bad the guy that brought the bike in couldn’t stick around to explain how he came by the bike. I’d like to think he had a good story, a legit one. Might be interesting to know the history of the bike while it was missing. Awfully nice bike to just walk out of the store and abandon.

All bikes included, but this is one it particularly would not be good to riding around without at least having made some serious effort at locating the rightful owner, and having documentation of the effort. Hope it’s still in good shape after being who knows where for five years…those are beautifully built bikes.

My first thought was that the guy who brought it in may have stolen it from someone else, since he fled quickly.

It probably sat in someone’s garage for 5 years, untouched, until the guy who brought it into the store stole it from them. That’s why it needed air in the tires.

Maybe I should have spent my money on more u-locks instead of med school. Doh! 🙂 Thanks again Scott (Bike Gallery) and Bryan (Bike Index)!!

My labs are electronic and virtual, but lab work is lab work. So let me see if I’ve got this… hours spent in the surgical tissue examination room vs. hours spent on the bicycle? Yep! That’s pretty much a no-brainer. Gimme the bicycle any day.

I’m glad Jade got her bike (and memorial) back in one piece.

Thief, alleged thief, non-thief, guy with OCD who just can’t stand to see under inflated tires…what ev! The real story is Scott’s presence of mind and good work to investigate and take action!
Good on ya Scott!!

Love this story!! Just in time for some beautiful weather, enjoy your reunion Jade.

Hope Jade shows her appreciation by buying two of Gallery’s best locks at full retail. One of the best feelings you can get working in bike retail, for sure. Good one, Clackamas Bike Gallery!

Vote Up0Vote Down  Reply
« Portland’s “pedestrian problem” is not going away
A look inside one newspaper’s thinking on crashes, accidents and collisions »