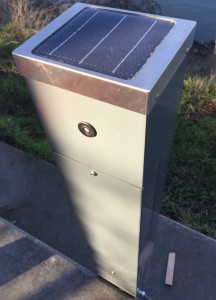 It’s up for the count.
(Photos: J. Maus/BikePortland)

It doesn’t look like much, but the City of Portland has just installed a high-tech new device on the Eastbank Esplanade between the Hawthorne and Morrison bridges (north of SE Salmon). It only stands a few feet tall but its stature in the wonky circles of bicycling and walking mode-share metrics is much larger than that. The device will give the Bureau of Transportation, Metro, and the Portland Parks & Recreation bureau access to more detailed data about how many and what type of users are on the path.

All you can see on the outside of the small pillar is a circular eye that faces the path and a photovalic (solar) panel on the top that provides the power. Over the weekend crews cut a small notch in the path’s pavement and buried sensors under the pavement. The device itself is a HI-TRAC CMU (cycle monitoring unit) model made by Pennsylvania company Jamar Technologies. According to the Bureau of Transportation, it cost about $7,500 but Jamar donated all the equipment and PBOT only paid for the labor to install it.

Here’s more from Jamar about the device:

The HI-TRAC CMU is a small, low powered, low cost electronic system capable of monitoring bicyclists and pedestrians. The CMU can use either piezo-electric or loop sensor technology to detect bicycles in either dedicated cycle ways or mixed traffic lanes as well as a pyroelectric infrared sensor to detect pedestrians. 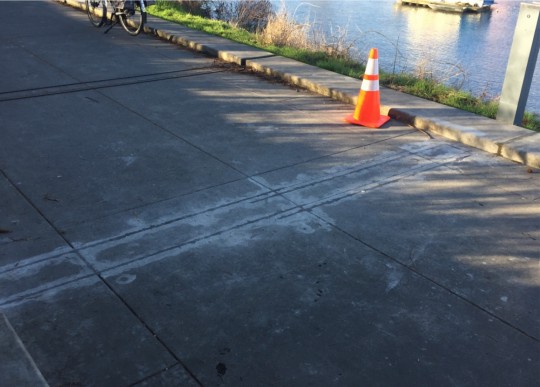 New sensors cut into the path and the counter on the right. 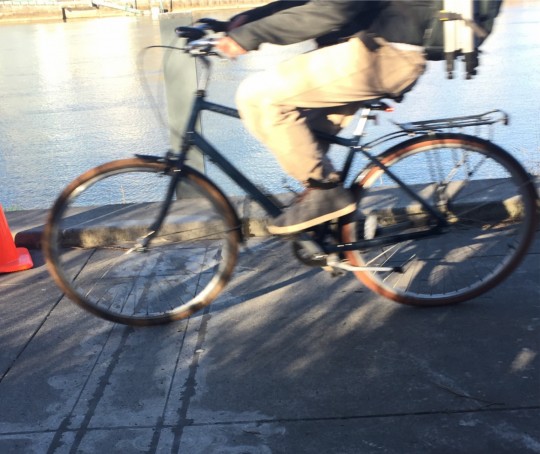 As various types of traffic cross the path of the device, Jamar’s “unique algorithms” calculate the number of axles in the vehicle, the direction of the person/vehicle, its speed and its length. By doing that it can tell whether the object was a bicycle or a scooter or a skateboard, or a person walking. 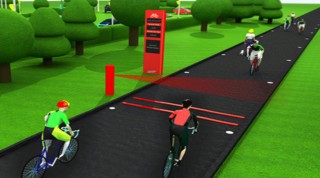 Portland’s Bike Coordinator Roger Geller told us this morning that the location of the counter was chosen for several reasons. First, he said, it’s in a place where it should be relatively easy to capture all the people walking and biking by it. The City already has historical counts at this same location so the new numbers will add to an existing dataset. “In addition,” Geller shared via email, “we wanted a busy, high-visibility location that would provide a good test of the counter’s ability to provide accurate data about both people walking and people bicycling.”

Where will all this data go? It’ll be collected and managed PBOT. For now it will be stored internally but will eventually be available to the public via PortlandMaps.com. Geller says PBOT and the Parks bureau will use the data to inform planning decisions. Metro also wants to use it to help calibrate their regional travel demand models.

Learn more about the latest technology counting your bike rides at Jamar’s website.

Hope it’s junkie proof so it doesn’t get parted out right away.

I hope not. I buy all my extremely specific proprietary counting device parts from “junkies”.

At Bob’s metals you could get $12.37 for that thing just for the box. I’ll bet two crank arms and a rear wheel that there is wire in there worth another $7.75.

I’m sure there is more worthy metal and wiring in any of the other municipal metal boxes around the city. Those seem to be staying whole.

>on the Eastbank Esplanade between the Hawthorne and Morrison bridges

How long until it’s destroyed?

Well, I hope this is mostly testing the counter and only secondarily gathering use data. I hate MUPs. Count me on roads where there’s a higher probability of users knowing the rules of the road.

n a path overrun seasonally by boardwalk bikes and nightly by campers by night, I think transportation is the wrong bureau collecting data.

Sorry for awful editing on my phone.

So.. I should wear pants while cycling through this area next week then?

Doesn’t matter, it is X-ray so all data is clothing optional 🙂

I think this is a great idea. Any way this technology can be used to automatically trigger a green light for people riding bikes, instead of having to position their bikes on an induction loop?

Yea, while I’m all for counting our masses, I’m concerned about the value of stainless steel in the recycle market, and what a can of spray paint can do to the photovoltaic panels.

I wonder if it can detect a skateboard?

Even though Jamar has been a leader in counting equipment, I’m skeptical that it will accurately detect and classify tandems, cargo bikes, bikes pulling trailers, bikes pulling kid’s trailer bikes, etc.

“Pyroelectric” was a new term for me. If I didn’t learn otherwise, I’d say it sounds like a cruel way to treat pedestrians!

It appears to be very close to the path. I wish it was rounded or padded somehow so when someone hits it while avoiding the Kerr-wagen bike or pink donut box laden gangs of earbud tourists, he or she won’t split his or her head open. Perhaps it could be retrofitted, but it won’t happen until someone loses some teeth.

Where can we see the data from this counter today in 2018? …also the Cycle Oregon donated counter on the other side of the Hawthorne Bridge?