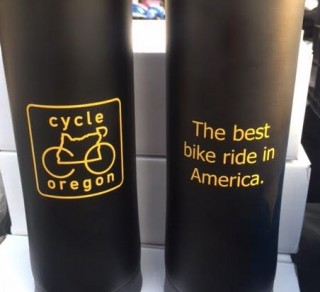 People from 46 states in America and six countries around the world have made their way to Baker City in Eastern Oregon to embark on the 28th annual Cycle Oregon ride.

There are 2,200 riders here, ranging in age from 8 to 81. Add them to the several hundred staff and volunteers and they constitute one-fourth the size of the total population of this “large” Eastern Oregon city (whose population has hovered around 10,000 for the past 100 years). Cycle Oregon has created a small, completely self-contained city at the Baker Sports Complex. The sprawling base camp is complete with a live entertainment stage, a gift shop, a bike shop, showers, and more. If the mood strikes, you can even do yoga, get an acupuncture treatment, or get a pre-ride massage.

With music from La Grande’s Wasteland Kings getting people to dance in the grass several yards away from me (their headlamps shining lights like a camping version of a disco ball), it’s fun to imagine that the Grande Ronde Valley, whose grass we are sleeping on tonight, was once a main thoroughfare for hopeful pioneers who rested here before taking on the rugged passage through the Blue Mountains.

Such is the involvement with Oregon’s history that typifies the Cycle Oregon experience. 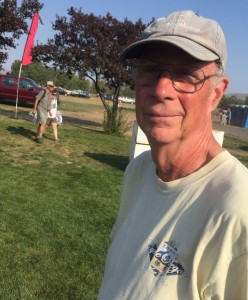 Joe Gruelich is one of a very distinguished few
who have done all 27 Cycle Oregons.

40 percent of the riders this year are doing it for the first time. They are new to the daily rhythms and traditions that make this event so legendary among those who have already taken part.

Speaking of legends, within a few minutes of being at camp I ran into my old friend Joe Gruelich. A resident of Vancouver, Washington, Joe has done Cycle Oregon all 27 times. He was there in 1987 when Ashland Innkeeper Jim Beaver teamed up with a columnist at The Oregonian named Jonathan Nicholas to do a bike ride to showcase rural Oregon. 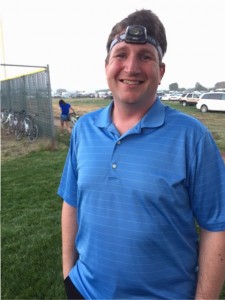 While Joe embarks on his 28th Cycle Oregon, 36-year-old Beaverton resident Christian Perrier eagerly awaits the start of his first. Christian started riding bikes just three years ago as a way to get in better shape. Since he couldn’t convince any of his buddies to join him, he’s out here flying solo. This Cycle Oregon ride will be the longest and hardest ride he’s ever done, but you’d never know that by talking to him because his smile and excitement cover up any nerves. “I’m super excited for it,” he shared, “It has been my big goal of the year.”

Christian will love the nice and easy route we have in store tomorrow. 51 miles (or an optional 65) that is mostly downhill into Farewell Bend State Park.

Stay tuned all week as I post stories from the road.

Note: I figured I’d try something new this year and not bring my DSLR camera and lenses like I usually do. So don’t expect big and lush photo essays everyday! I think the change will result in more conversations and better stories (I tend to hide behind my lens sometimes and get too focused on photos while forgetting about people and writing).

Some of us LIKE hiding behind the lens 🙂 it’s a great way to be in public as an introvert.