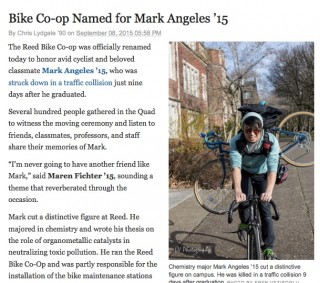 Mark Angeles was the 22-year-old Reed graduate who was killed in a collision while biking on SE Gladstone back in May. Angeles was an active member of the Reed community and was manager of the Co-Op.

“Mark Angeles had an enduring impact on the lives of students, staff, faculty and many others beyond Reed,” wrote Reed’s Vice President for Student Services Mark Brody in an email last week. “We miss him dearly.”

On Tuesday Angeles’ friends and family organized a memorial event and bicycle ride in his honor. 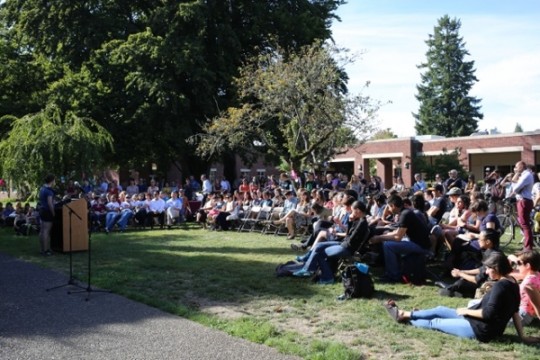 Writing on the Reed Magazine blog, Chris Lydgate shared a description of the event:

Several hundred people gathered in the Quad to witness the moving ceremony and listen to friends, classmates, professors, and staff share their memories of Mark…

Many speakers shared stories demonstrating Mark’s remarkable compassion for other people. How he showed a first-year student around Portland. Brought his thesis advisor tea. Delivered doughnuts to students in chemistry lab. Cheered up a friend by inventing a bicycle variant of Quidditch.

Angeles is the only person to die while bicycling in Portland this year.

This is a nice gesture. Any word on whether the driver who killed Angeles will be charged criminally? Initial reports were that she turned left in front of him when he had the right of way.

If any charges were filed against the tow truck driver, it is unlikely it was more than a wrist slap. Everyone remember that as far as PPB is concerned Cyclisyts were still regarded as fair game for motorists. Especially Motorists with no insurance and no licence.

One thing that might reduce these incidents is follow-up news stories that report on the punishment doled out to the guilty party, so that drivers take their responsibility more seriously.

Assuming there IS a punishment, of course.

I’m not sure I’ll ever forget Mark’s name. I never knew him personally, but I live near where he was killed, which really shook me up. Then, for weeks I couldn’t go anywhere without one friend or another telling me how they knew Mark and what a great guy he was. I hope he knew how much love there was for him, all around.

Yep. I live at 35th and Gladstone, and see his ghost bike just about everyday as a constant reminder.

Still can’t believe it, so tragic.

🙁 still bummed out, that area needs a total road diet.. RIP dude!
we ride for you still….

I wish this didn’t have to happen. 🙁